Plans for drug decriminalization in Vancouver could do more harm than good, coalition claims 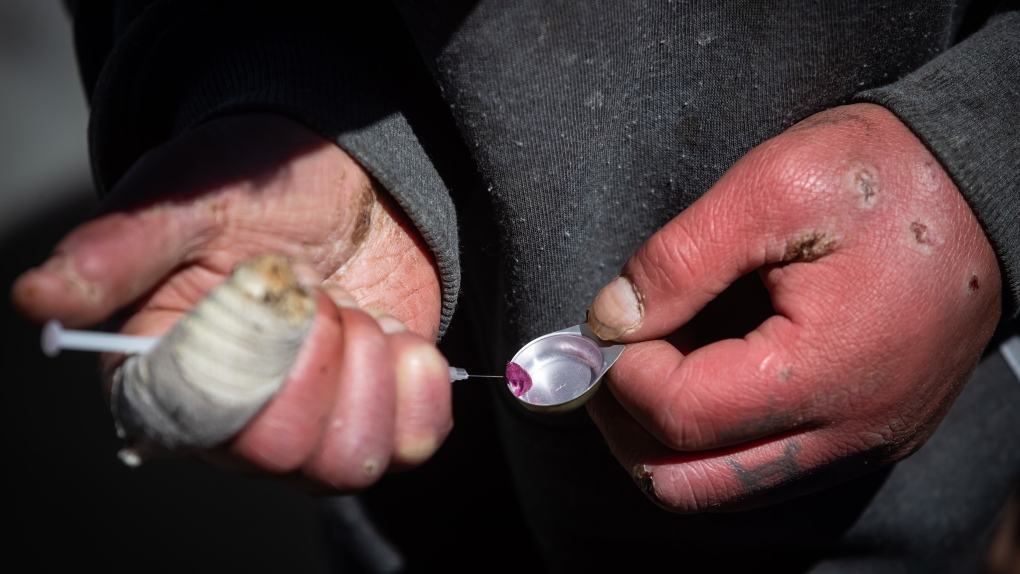 A man draws an unknown illicit substance into a syringe before injecting it into his arm on the five-year anniversary of British Columbia declaring a public health emergency in the overdose crisis, in Vancouver, on Wednesday, April 14, 2021. (Darryl Dyck / THE CANADIAN PRESS)

VANCOUVER -- Advocates are calling on the federal government and the City of Vancouver to halt the march toward possible drug decriminalization in the city, saying the process excludes users and demands a do-over.

In a letter to federal Health Minister Patty Hajdu and the Vancouver and British Columbia working groups on decriminalization, a coalition of 15 organizations said the current proposal must be scrapped immediately or risks reproducing the harms of prohibition.

“We cannot abide by the phony 'Vancouver Model' of decriminalization and refuse to be tokenized in petty political bids,” reads the letter from groups representing users.

The group says police have an oversized role in developing the so-called Vancouver model and that the thresholds that define simple possession are too low in the latest submission to Ottawa.

The letter comes after the Vancouver Area Network of Drug Users' (VANDU) board of directors resigned from the city's decriminalization working group Monday. A morning meeting between the working group and Health Canada officials confirmed that the board's input “is not being taken seriously,” VANDU said in a statement.

The open letter also comes ahead of a planned submission on decriminalization to the federal Health Department this Friday.

Health Canada is currently working with Vancouver on the city's request for exemption from criminal provisions on simple possession of small amounts of drugs.

Vancouver has been the epicentre of an opioid crisis that saw B.C. record 1,176 illicit drug overdose deaths in 2020 - the highest ever in a single year - and more than 7,000 deaths since a public health emergency was declared in April 2016.

Mayor Kennedy Stewart said officials “respect the views of VANDU and other groups.”

“The proposed thresholds are a starting point and will be monitored and evaluated as more data become available,” Stewart said in a statement.

He said the city's application to Health Canada is grounded in local data - though VANDU argues the figures are outdated - and aimed at reducing stigma to achieve a “fully health-focused approach to substance use.”

“As with many pioneering projects, efforts must be made to find consensus between a variety of groups with often vastly differing opinions,” Stewart added.

In an emailed statement, Hajdu stressed that “substance use is a health issue, not a moral one.” Police are among the “relevant stakeholders,” along with Vancouver Coastal Health, the city and the province, she said.

The coalition is demanding the Vancouver Police Department take a backseat in discussions and asking the city to raise the proposed drug thresholds from a supposed three-day supply.

“The police and city officials and health officials go off into a room and prepare something and then they show it to us as they're about to send it to Health Canada,” said VANDU representative Garth Mullins in a news conference Tuesday.

“That is a focus group ... That is not co-design,” he said. “That is a decriminalization regime designed by and for police, and it is a Trojan horse to recriminalize us on the other side of its implementation.”

Caitlin Shane, a lawyer at the Vancouver-based Pivot Legal Society, worries that a defective decriminalization model could set a harmful precedent for jurisdictions across the country.

Lower thresholds on what constitutes simple possession - rather than possession for the purpose of trafficking - mean users cannot buy multiple days' supply in one purchase without violating the Criminal Code.

It could also necessitate more frequent interaction with dealers, along with the attendant danger, Shane said.

“These thresholds mean that we are actually incentivizing people to engage with that criminal system more frequently because they are unable to purchase in larger amounts.”

Drug users also face greater dangers as the third wave of COVID-19 forces harm reduction sites and outreach programs to curtail their services, leaving at-risk communities out in the cold.

In B.C., deaths linked to the synthetic opioid fentanyl had been on the decline for more than a year until April 2020, when monthly numbers routinely began to double those of 2019.

Opioid-related deaths countrywide could climb as high as 2,000 per quarter in the first half of 2021, far surpassing the peak of nearly 1,200 in the last three months of 2018, according to modelling from the Public Health Agency of Canada.

Benzodiazepines have been detected in drugs circulating in parts of several provinces. Users can be difficult to rouse and slow to respond to naloxone - the drug that reverses opioid overdoses - and more likely to overdose when fentanyl or other opioids are also in the mix.

Richard Elliott, executive director of the HIV Legal Network, said decriminalization helps to remove stigma and barriers to services. But safe supply and treatment programs also make up a key part of the equation, “especially if people's use patterns are being affected by restrictions and by changes in the drug market,” he said in an interview.

The B.C. government have made several commitments to helping drug users - Vancouver is also pushing to enhance safe supply - with some supervised consumption sites in the province as well as overdose prevention sites in many cities.

Hajdu said the federal government's focus on harm reduction includes its support for the 2017 Good Samaritan Drug Overdose Act, which exempts people from charges after they call 911 during an overdose. The Liberal government has also funded programs that seek to divert users from the criminal justice system and enhance access to safe consumption sites and treatment options, she noted.

Ottawa's work on the decriminalization file is “guided by the health needs of people who use substances” as well as recommendations from the Canadian Association of Chiefs of Police and federal prosecutors, she added.

B.C. is preparing its own provincewide application for exclusion from the rules around simple possession - illegal under the Criminal Code, but open to exemption along with other provisions of the Controlled Drugs and Substances “if, in the opinion of the minister, the exemption is ... in the public interest,” the legislation reads.

“Our approach will seek input from many different groups including people with lived/living experience, frontline service workers and health care professionals, and chiefs of police,” the B.C. Ministry of Mental Health and Addictions said in an email.

This report by The Canadian Press was first published May 11, 2021.