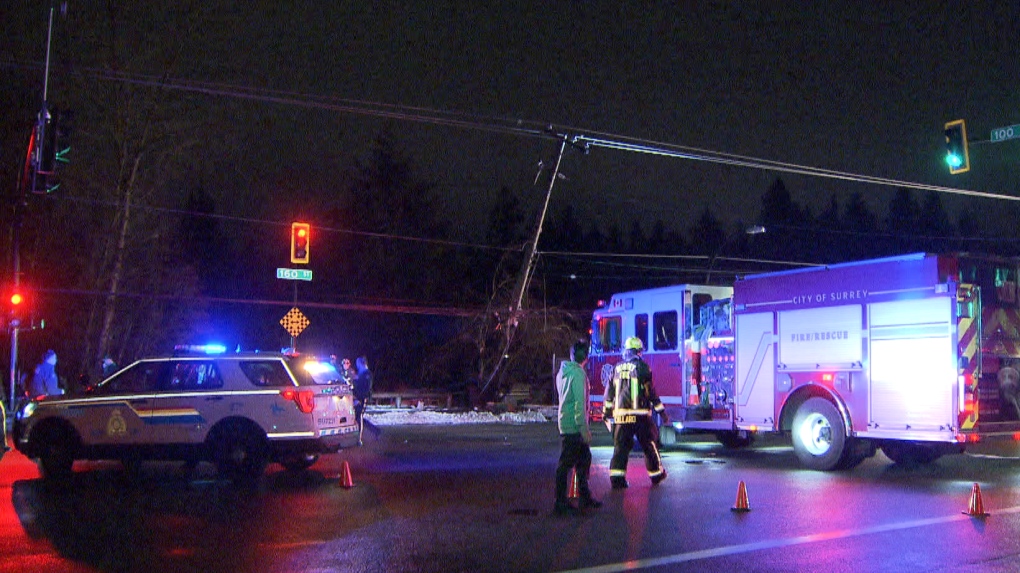 The driver of a pick-up truck crashed into a hydro pole late early in the morning of Tuesday, Jan. 21, 2020.

VANCOUVER -- A man has been taken to hospital after his pick-up truck crashed into hydro pole in Surrey early Tuesday morning.

First responders descended on 100th Avenue and 160th Street shortly after midnight, and closed off the area to the public due to electrical hazards.

BC Hydro’s website says around 500 customers are without power in the area with an estimated repair time of 9 a.m. Tuesday morning.

The hydro pole has been sheared off right at the base leaving high voltage power, utility lines and the pole suspending in mid-air.

The pick-up truck landed in a grassy field just past the intersection. Surrey RCMP officers were seen placing a few bottles in plastic evidence bags. The driver was conscious and breathing when he was transported by BC Emergency Health Services.

CTV News has contacted Surrey RCMP for more information, but the cause of the crash is unknown.

A man has been taken to hospital after his truck sheared off a hydro pole on 100ave/160st. Roughly 500 hydro customers without power. @Local1271. Details on @CTVVancouver & @CTVMorningLive pic.twitter.com/37vNeMqPZY