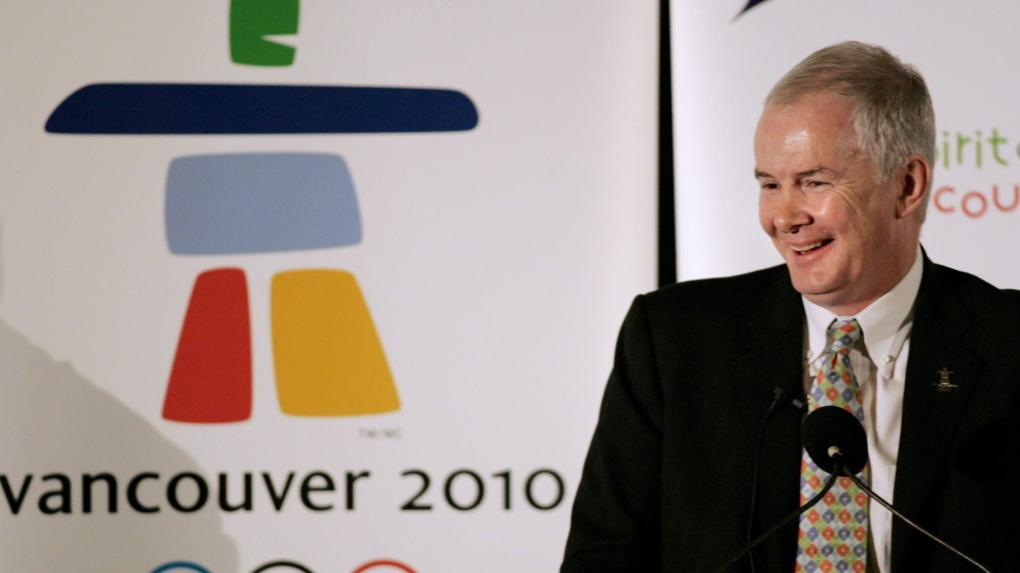 John Furlong, VANOC's CEO laughs as he gives a luncheon speech at the Vancouver Board of Trade Wednesday October 25, 2006. John Furlong still sees the signature of the 2010 Olympic Games scrawled across Vancouver as he walks through the city's downtown. It's not just the cauldron where tourists gather for selfies or the one-time athletes' village that's transformed into a bustling urban neighbourhood. The former president and CEO of the Vancouver Olympics organizing committee still feels the energy of the Games when people come up to him on the street, wanting to share their memories. THE CANADIAN PRESS/Chuck Stoody

VANCOUVER - John Furlong still sees the signature of the 2010 Olympic Games scrawled across Vancouver as he walks through the city's downtown.

It's not just the cauldron where tourists gather for selfies or the one-time athletes' village that's transformed into a bustling urban neighbourhood.

The former president and CEO of the Vancouver Olympics organizing committee still feels the energy of the Games when people come up to him on the street, wanting to share their memories.

“When you walk around the city today you can feel the fingerprints of the Olympics on everything,” he told The Canadian Press.

Furlong is reflecting on the legacy of the Games this week as Wednesday marks a decade since the Olympic flame landed in Canada, kicking off a lengthy torch relay ahead of the two-week-long competition.

Memories around the beginning of the relay are bittersweet for Furlong. His best friend Jack Poole, chair of the Olympic organizing committee, died of pancreatic cancer just a week before Furlong landed in Victoria on a Canadian Air Force jet with lanterns containing the prestigious fire.

“I remember on the first day having this incredible sadness but also great exhilaration,” Furlong said. “In a way, I feel that Jack died on a day where he felt it was OK to go. The project was now up and running.”

Starting on Oct. 30, 2009, the Olympic flame traversed Canada for 106 days straight. It passed through every province and territory, and through the hands of more than 12,000 people before the cauldron was lit on Vancouver's waterfront.

From the very beginning the organizing committee wanted the 2010 Olympics to be “Canada's Games,” Furlong said, and the relay was an opportunity to see whether the country had bought into their vision.

“We wanted to touch every life, every child, every family, every business. We wanted this to matter to everybody. We wanted to be part of their conversation,” he said.

Furlong still has a vivid memory of the day the relay landed in Old Crow, a remote community of about 220 people in northwest Yukon.

“The town had pretty much doubled in size. Then we knew it was game on,” he said.

Despite support along the relay route, the Games got off to a wobbly start once the flame returned to Vancouver.

Furlong fondly remembers how Vancouverites continued to support organizers and volunteers, encouraging them to keep going.

“We just sort of felt like they had our backs,” he said.

“When we were struggling, when the young man from Georgia died and we were facing all kinds of challenges and adversity and bad weather and the tough start we had, the people of the city were all cheering us on and doing what they could and adding a layer of enthusiasm and spirit to the project.”

Throughout the Games, Canadian history was made again and again.

Alexandre Bilodeau became the first athlete to ever capture Olympic gold on Canadian soil, taking first in men's moguls on the second day of competition. The country's athletes also set a new record for medals at a Winter Games, winning 26 (14 gold, 7 silver and five bronze).

Seeing an abundance of strong performances was crucial for Canadians watching at home, Furlong said, noting that people didn't care about the logistics of the events, like busses getting to venues on time.

“They cared about turning on the TV and being excited,” he said. “They expected us to do our jobs.”

“It was almost a unique Canadian story in that (the Games) started out with great adversity and ended with a profound victory,” Furlong said. “It's kind of a hero story. It's very special.”

Those moments of success created a lasting legacy, he added.

With athletes winning medals in new disciplines at an unprecedented rate, high-performance sports grew into a larger priority for the country, Furlong said.

“Now we have this obligation to not let it go away, to not let it die and to make sure we play our part in laying the table for the future and using this as an example of the success you can have when you pour it on, put the right resources in place, prepare the team properly,” he said.

While several of the stars from the 2010 Games have moved on from their athletic careers, a fresh set of skiers, skaters and sliders are taking their place.

Many of those athletes first fell in love with sport watching the Vancouver Olympics, Furlong said. Others, he noted, have grown up training at facilities like the Whistler sliding centre or the Richmond Oval, both venues that were built for 2010.

The Vancouver Olympics did not, however, leave the entire country with a burning enthusiasm to once again host the Games.

Calgary held a plebiscite last November, asking citizens if they wanted to host the 2026 Winter Games. Nearly 305,000 people voted, with 56.4 per cent saying 'no.'

The decision was a disappointing one for Furlong, who believes hosting the Olympics could have given Alberta something to unite around “like a spiritual lift.”

Still, he doesn't think Canada is permanently out of the running for bringing the Games back.

“I think the next time (Canada) goes to look for an Olympic Games, we'll be better at it,” Furlong said. “We'll have evolved more. The kinds of things that happened to (the Calgary) bid perhaps won't happen again.”

In the meantime, the former head of the 2010 Games is using the 10-year anniversary as an opportunity to “rekindle the spirit of the Games” with a gala in Vancouver on Feb. 22.

Current and former athletes, and many of the people who helped put together the Vancouver Olympics will use the occasion to remind each other of what it takes to develop champions, Furlong said.

Funds raised by the event will go towards supporting Canadian athletes.

“Ten years on, people are still excited. Many of these young athletes are now champions for the next generation,” Furlong said.

“We have this new kind of class, this graduating class of leaders who are going to be ready to take the next step and lead Canada into the next Olympic bid, whenever it is.”