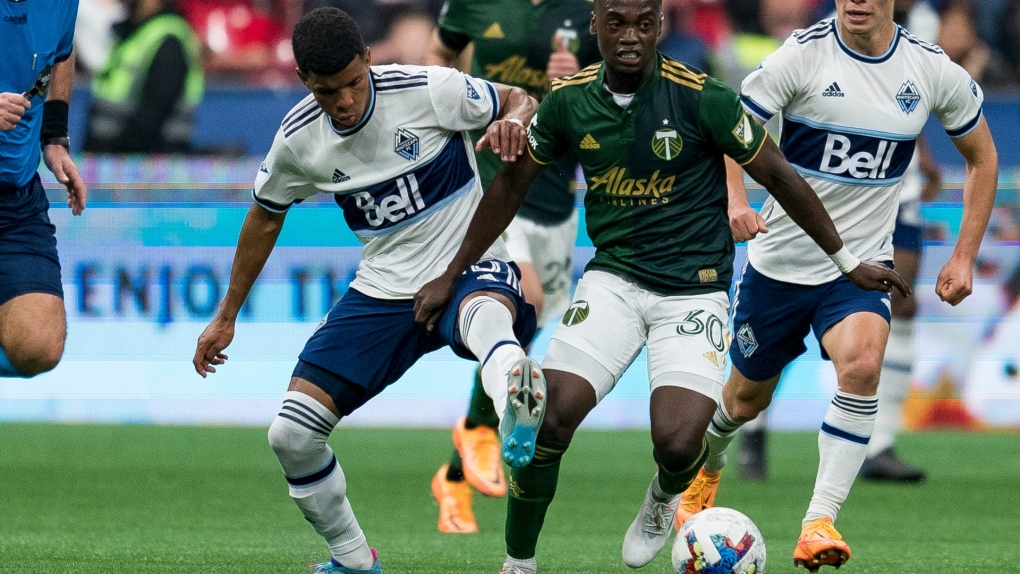 Anger and frustration lingered Saturday night after the Vancouver Whitecaps' attempt at a comeback fell short.

The 'Caps dropped a 3-2 decision to their rival Portland Timbers in a feisty matchup rife with drama.

What, exactly, went wrong for the home side wasn't immediately clear to head coach Vanni Sartini.

“I don't know how did we lose. I actually don't know. It's inconceivable. We need to get better,” he said.

“It's a game that we shouldn't even have tied, we should have won.”

Penalties proved to be the difference maker on Saturday, with players called to the spot three separate times, all following video review.

Asked whether he'd ever played in a game with three penalty kicks before, 'Caps midfielder Sebastian Berhalter smiled.

“I don't think so, no,” he said. “That was pretty crazy. Probably could have been a couple more, honestly.”

The match marked the 100th all-time meeting between the Timbers and the Whitecaps, dating back to 1975 with games across six different leagues.

Familiarity between the two sides created an extra level of competition in the game, Berhalter said.

“It's a rivalry,” he said. “I think both teams came to the game knowing it would be aggressive.”

Dairon Asprilla scored on a first-half penalty kick for Portland (2-2-3), striker Jaroslaw Niezgoda cushioned the lead in the 60th and Yimi Chara added a dagger in the 78th.

Cristian Dajome replied for the 'Caps (1-4-1) in the 76th minute and Ryan Gauld put away a penalty kick in injury time.

It was a busy night for Portland 'keeper Aljaz Ivacic busy, who stopped five shots, while Thomas Hasal made a single save for Vancouver.

The 'Caps generated ample chances across the second half, and outshot Portland 17-5 across the game, with a 7-4 edge in shots on goal.

The third penalty of the game came early in injury time when Caicedo was taken down by Claudio Bravo.

After a video review, Gauld took the kick, firing a left-footed shot into the top corner of the net for his first goal of the season.

The 'Caps got another penalty in the 87th minute after Gauld was pushed down from behind by Bravo at the top of the penalty area.

Referee Silviu Petrescu did not initially call a foul on the play but awarded the kick after a video review.

Dajome stepped up to take the ensuing penalty but sent the ball into Ivacic's hand as he dove along the goal line.

The Timbers climbed out to a 3-1 lead in the 78th minute after Chara broke through a pair of Whitecaps inside the penalty area and sent a shot past Hasal as he fell to the turf.

“I think that's an unlucky goal,” said Vancouver defender Ranko Veselinovic. “Because the ball bounces, it goes between two of our players, bounces to Chara and he scores a great goal. It's frustrating, honestly.”

Just two minutes earlier, the 'Caps got on the board when Caicedo sent a ball to Gauld just above the six-yard box, only to see the Scottish midfielder miss the sliding shot.

The ball landed on Dajome's foot instead and he quickly launched into the top right-hand corner of the net, cutting Vancouver's deficit to 2-1 with his first goal of the season.

Portland found the back of the net in the 60th minute when Niezgoda got around Vancouver defender Florian Jungwirth at the top of the penalty area and fired a shot in past Hasal to put Portland up 2-0.

The announced crowd of 16,772 erupted in the 58th minute when Caicedo put the ball in the back of the net. But the goal was quickly waved off, with the referee ruling the Colombian forward fouled Larrys Mabiala at the top of the penalty area while stripping him of the ball.

Vancouver wasn't playing to its potential in the first half, Sartini said.

“We fell in the trap of, since they're a sleepy team, we went sleepy too. And that cannot happen,” he said. “We need to go 100 miles an hour every time if we want to win the game.”

Trouble brewed for Vancouver in the 28th minute when Dajome took out Portland's Marvin Loria with a flying tackle in the 'Caps penalty area.

Initially, there was no whistle on the play but minutes later Petrescu sent the call to video review and awarded a penalty.

Asprilla lined up and sent the ball soaring over a diving Hasal and into the top left-hand corner to give Portland a 1-0 lead in the 42nd minute.

It was the first goal the 'Caps have conceded at B.C. Place this season.

Hasal kept the game knotted at 0-0 in the 27th minute when Cristhian Paredes launched a rocket from the top of the box. The Canadian 'keeper tracked it the entire way and made an easy stop.

The Whitecaps had a prime opportunity to open the scoring in the 16th minute when Cristian Gutierrez sent a ball through traffic to Brian White. The American striker sprinted down the field, fighting off Mabiala, and got a shot off, but the ball went wide off the far post.

The `Caps kick off a three-game road trip next Saturday against CF Montreal. The club won't play in Vancouver again until May 8 when they host Toronto FC.

NOTES: Whitecaps striker Lucas Cavallini was held out of the lineup due to a non-COVID illness; The 'Caps hosted their first ever Vaishaki celebration, celebrating the South Asian community and the solar new year.

This report by The Canadian Press was first published April 9, 2022.

The campaign for Patrick Brown said it was consulting its legal team after the leadership election organizing committee of the federal Conservatives voted to disqualify him from the race late Tuesday.