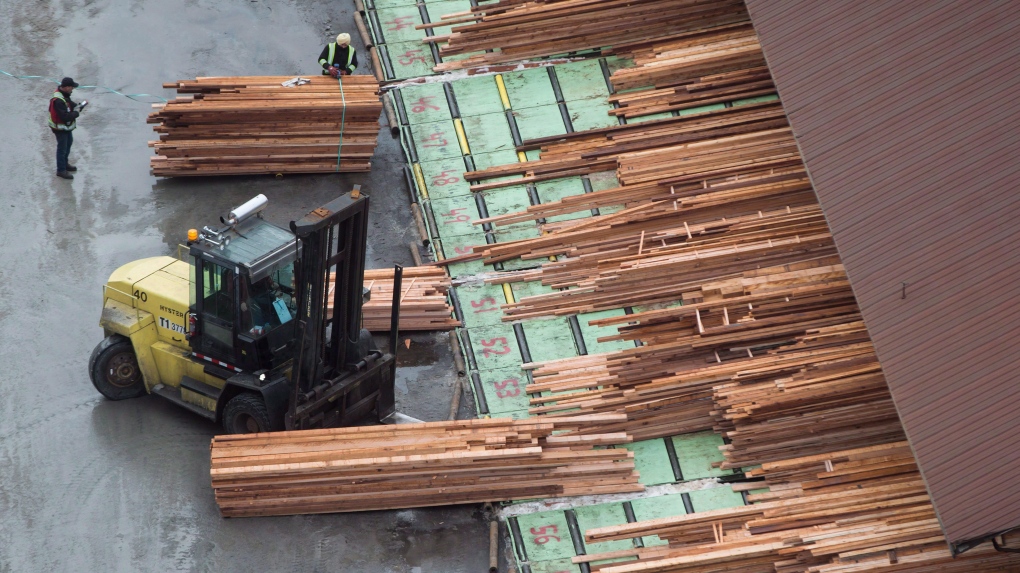 Workers sort and move lumber at the Delta Cedar Sawmill in Delta, B.C., on Friday January 6, 2017. (THE CANADIAN PRESS/Darryl Dyck)

VANCOUVER -- The COVID-19 crisis is exposing the shortcomings of Canada's economy, particularly when it comes to supply chains and the development of value-added products that would keep the country competitive, innovation experts say.

Dan Breznitz, the co-director of the innovation policy lab at the University of Toronto, said he expects global trade in raw commodities to decline as the novel coronavirus makes it more difficult to move people and goods around the world.

It's a wake-up call for Canada's resource-based industries, he said, noting Canada “will have a problem just selling wood and unprocessed oil.”

The country must rebuild its capacity to produce sophisticated goods through innovation in those sectors and beyond, said Breznitz, who is also the chair of innovation studies at the Munk School of Global Affairs.

“We no longer can actually produce the basic things we need in order to survive under (a) pandemic, and we cannot count on global production networks to do that in times of crisis.”

“The issues that we see today around (personal protection equipment) and getting stuff out of China is all illustrative of the fact that our economy, to some extent, has been totally submerged into other countries in terms of supply chains,” he said.

“Our strategy of selling raw natural resources doesn't make a lot of sense. We need to have the capability of developing more finished goods ourselves.”

Canada lags behind other members of the Organization for Economic Co-operation and Development for investing in research and development on new products and technology, said Winter.

In his final report to the B.C. government, released last week, Winter pointed out that about 1.4 per cent of the province's GDP goes towards research and development, while the OECD average is about 2.4 per cent. Several of Canada's competitors make investments in the 3.5 per cent range, he added.

Breznitz said Canada lacks policies aimed at creating more small- and medium-sized enterprises and then helping them grow, particularly when it comes to access to capital in the early stages before investments from venture capitalists.

“Right now in Canada, it will be almost impossible to get the finance, just the basic finance for you to be able to scale up,” he said, using an example of a family owned, medium-sized business with an idea for a new product or technology.

“It expensive and each province has its own little quirks. So, it's actually easier to sell to the whole United States.”

He said the federal government should provide targeted grants and loans directly to entrepreneurs and companies, rather than funnel money into more innovation “superclusters,” accelerators and incubators.

The “silver lining” is that Canada's workforce is much more sophisticated than it was 15 years ago, with the proven potential for innovative ideas, Breznitz said.

Others are commercializing those ideas, said Breznitz, pointing to large multinationals that have ramped up operations in Canada including Facebook and Google.

“The question is what kind of policies would allow more Canadian entrepreneurs, small businesses and big businesses, old and new, to do exactly what the multinationals are doing.”

Private companies operating in Canada have also failed to invest in research and development because innovation is costly and risky, he said.

“You can make easy money with less risk by being less sophisticated.”

The need for economic support and opportunities is even more pronounced in rural communities, where Breznitz said the lack of investment has been “catastrophic.”

“We should be delivering basic services at a national level to all Canadians. And we're not even close to there right now.”

The pandemic may mobilize rural residents to demand the same essential service standards available in urban areas, said Coates, who also teaches at the graduate school of public policy at the University of Saskatchewan.

He said Canada's natural resources have made the country rich and complacent.

The irony is that much of Canada's resource development happens in and around rural and remote communities that should have become prosperous as a result, Coates said.

Economic development in rural and remote areas should capitalize on local strengths, he said.

For example, the capital of Sweden's northernmost county was well-suited to become the host of Facebook's European data servers. The city of Lulea has cheap and abundant hydro electricity and cold temperatures for the hot servers, much like parts of B.C., said Coates.

But it takes a lot of nerve, enthusiasm, commitment and support for a rural or remote community to decide to stand up and fight for new jobs, investors and residents, he said.