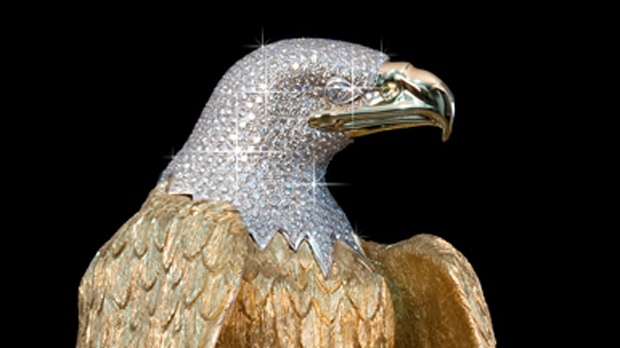 An eagle statue that is considered by some to be the most expensive contemporary art piece in Canada has been stolen from its owner’s backpack. (Handout).

VANCOUVER - The owner of an elaborate golden eagle statue reported stolen in a violent robbery two years ago now says in court documents the item is worth $930,450, not $7 million as he originally claimed.

Ron Shore's company Forgotten Treasures International Inc. has filed a lawsuit against several insurers for denying his claim over the theft of the eagle.

Shore told reporters at a press conference in May 2017 that he was in Ladner, B.C., when two men ambushed him, hit him over the head with a large flashlight and stole the eagle.

He said at the time that the diamond-encrusted statue, which he planned to sell to raise money for breast cancer, had been appraised at $7 million.

In the recently filed lawsuit, Shore says the appraised value of the eagle was $930,450, and when reached by phone Thursday Shore said he could not comment because of the police investigation into the theft.