A B.C. woman speaking out about “death care” being easier to access than adequate health care is sending shockwaves throughout the country, with disabled advocates, doctors and observers holding up her experience as a potent example of the slippery slope of expanded dying with dignity legislation.

The topic of Medical Assistance in Dying (MAID) is in the spotlight and many experts, patients and advocates have testified at a special committee that the elderly, chronically ill and disabled are at risk of feeling pressured or cornered into choosing to die under expanded legislation – which is exactly what “Kat” described.

The woman in her late 30s asked to be referred to with a pseudonym and does not have a terminal diagnosis but is in constant pain and now experiencing organ failure due to complications from Ehlers-Danlos Syndrome, so she applied to the Fraser Health Authority for assisted death in the hope it would lead to more medical or social supports.

“If I'm not able to access health care am I then able to access death care?” she said of her thought process. “My suffering was validated to the extent of being approved for MAID, but no additional resource has opened up.”

Disabled Canadians who have been holding marathon roundtable discussions on MAID and the implications for the vulnerable cited her situation the day after Kat spoke up.

“We are raising our voices because Kat and many others like Kat need us in their corner,” said Disability Filibuster participant, Catherine Frazee. “We are still outraged and distraught with every new report that one of our kinfolk have succumbed to a MAID application.”

Others are taking to social media voicing similar concern and dismay at the details.

let's wait to hear those zealously supporting #MAID as quasi-inherently beneficial practice explain this away again w "solution is not to prevent MAID but increase support", ignoring that mere availability & promotion of #MAID causes direct harm & removes incentive to do more https://t.co/mlTphDLO9R

How do people find this acceptable? Over 7k people died by #MAiD in 2020, no numbers for 2021 yet. How many of them were coerced by legislated poverty & denial of care? https://t.co/ZM7vgzGshN

There is no doubt that since the laws changed to allow medical personnel to help suffering people end their lives, there’s been a steady increase in the number of people choosing to do so.

Of the three most populous health authorities, Island Health saw the most deaths per capita and has the highest rate of MAID in the country. The Ministry of Health says in 2016, 80 people had MAID compared to 683 in 2021. In Fraser Health, there were 26 and 361, while Vancouver Coastal Health had 57 and 445 in those years, despite much larger populations in those two regions. 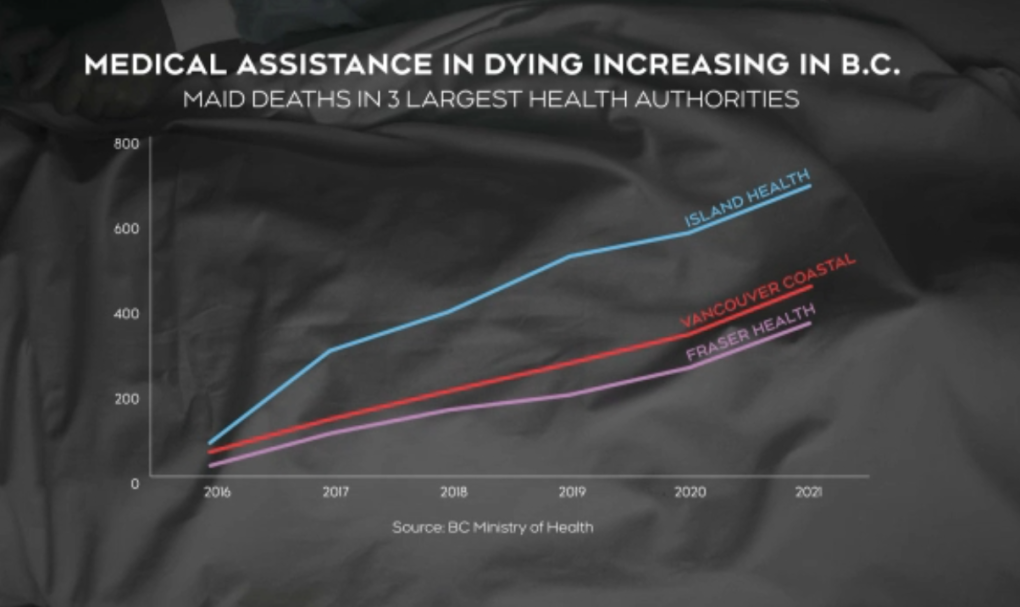 CTV News asked the ministry for the number of applicants for each of those years, but a spokesperson claims they don’t collect that data.

A peer-support network that provides guidance and information to those considering MAID says they’ve seen a tripling of web traffic, engagement and registration since they established their volunteer service when MAID started in 2017.

“Every week we're getting more and more requests where people say 'I just need to talk to someone,'” said Bridge C-14 CEO Lauren Clark, who confirms that some of those people do not want to die but feel they have few other options amid poverty, disability and a lack of access to resources.

“There are individuals who this is their experience,” she said. “They're navigating this all on their own and they are trying to fight a system that hasn't been supportive of them."

As the special committee of parliamentarians and senators begins writing its draft recommendations to government, observers say it may be public pressure that has the biggest result.

“My sense is that members of the public may not have appreciated how the legislation would impact people with disabilities living in poverty,” said Kerri Joffe, a lawyer with the ARCH Disability Law Centre in Ontario.

She pointed out that the expansion to include people suffering but without a reasonably foreseeable death happened during the pandemic, when COVID-19 was dominating everyone’s lives. Already, United Nations representatives have raised concerns about “ableist assumptions about the inherent 'quality of life' or 'worth' of the life of a person with a disability,” noting disability is not a burden or defect.

“Tragically those warnings have now become reality and that's what I think is really shocking,” said Joffe. “It really should give us all pause (before expanding further).”

For its part, Fraser Health insists it’s doing enough for the people with serious health issues living within its jurisdictional boundaries.

“Our role is to support people in accessing appropriate health resources and services that best meet their care needs,” wrote a spokesperson. “If a person is low-income and is experiencing financial barriers to accessing care, we will support them in understanding how they may access health supports or services not covered under MSP, if funding supports are available.”

The rapid growth of a long-burning forest fire in central Newfoundland has triggered a state of emergency in the area and prompted the province's Premier to urge some nearby communities to prepare for possible evacuation.

Hundreds forced out of their homes as Okanagan wildfire rages on in B.C.

An evacuation order remains in effect in Olalla, a community just north of Keremeos, B.C., as a wildfire classified as 'out of control' continues to grow, impacting nearby residents.

While the peak of the Perseids meteor shower, one of the brightest of the year, may be next week, now may be the best time to see the astronomical event, according to The Weather Network.

Ottawa is reimbursing a record number of veterans for medical marijuana, with new figures showing the federal government shelled out more than $150 million in the last fiscal year -- more than double the amount just three years ago.

Actress Anne Heche has 'long recovery ahead' after car crash

Anne Heche remains hospitalized and in intensive care after a car she was driving crashed into a residence in Los Angeles on Friday and became engulfed in flames.

What does Alex Jones’ US$49.3M verdict mean for the future of misinformation?

Alex Jones is facing a hefty price tag for his lies about the Sandy Hook Elementary School massacre — US$49.3 million in damages, and counting, for claiming the nation’s deadliest school shooting was a hoax — a punishing salvo in a fledgling war on harmful misinformation.