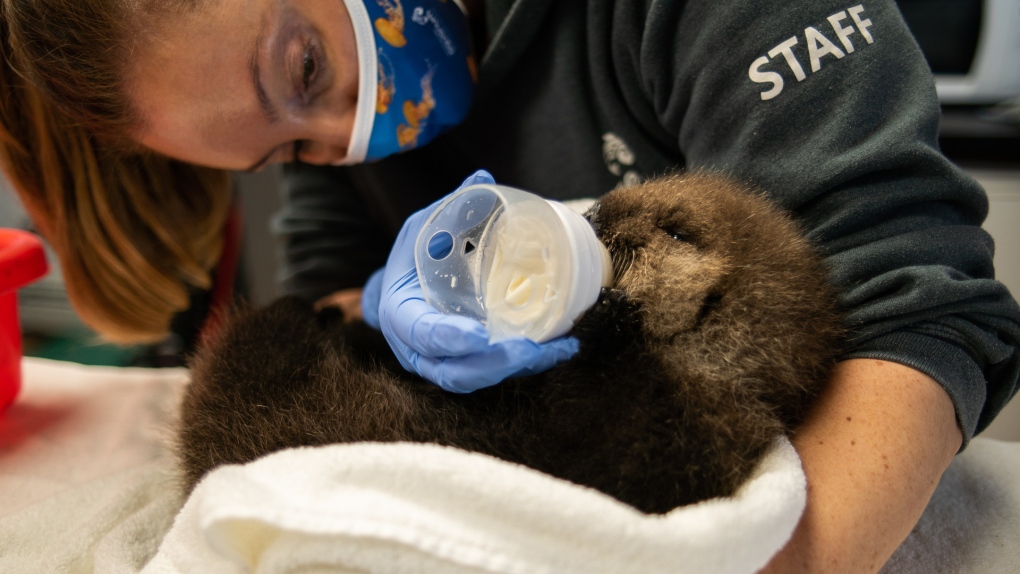 The male pup, who is estimated to be about 10 days old can be seen in this handout photo provided by the Ocean Wise Marine Mammal Rescue Centre in Vancouver.

The male pup, who is estimated to be about 10 days old is now in intensive care at Ocean Wise Marine Mammal Rescue Centre in Vancouver.

He was discovered Thursday by a concerned resident who heard the pup making noise overnight near Kyuquot, a remote First Nations community.

The following morning, an adult sea otter presumed to be the pup's mother was found dead nearby.

The newborn pup, now named Joey as a tribute to one of the rescue centre's long-time supporters, was flown to Vancouver International Airport on an Air Nootka seaplane.

"It was really an incredible effort to get him to the rescue centre safely," said Lindsaye Akhurst, manager of the Ocean Wise Marine Mammal Rescue Centre, in a news release.

"He wouldn't have been able to survive much longer on his own so we're really grateful that we were able to get him treatment quickly."

Staff members and volunteers have been giving Joey around-the-clock care by taking turns bathing, grooming and feeding the otter pup.

"Sea otter pups are incredibly dependent on their mothers for the first six months of their lives," said Dr. Martin Haulena, head veterinarian at the rescue centre.

"This pup would normally learn to groom, swim and feed from its mother, so he has quite the journey ahead of him. He's definitely hypoglycemic and hypothermic but he's starting to feed well so that's a good sign."