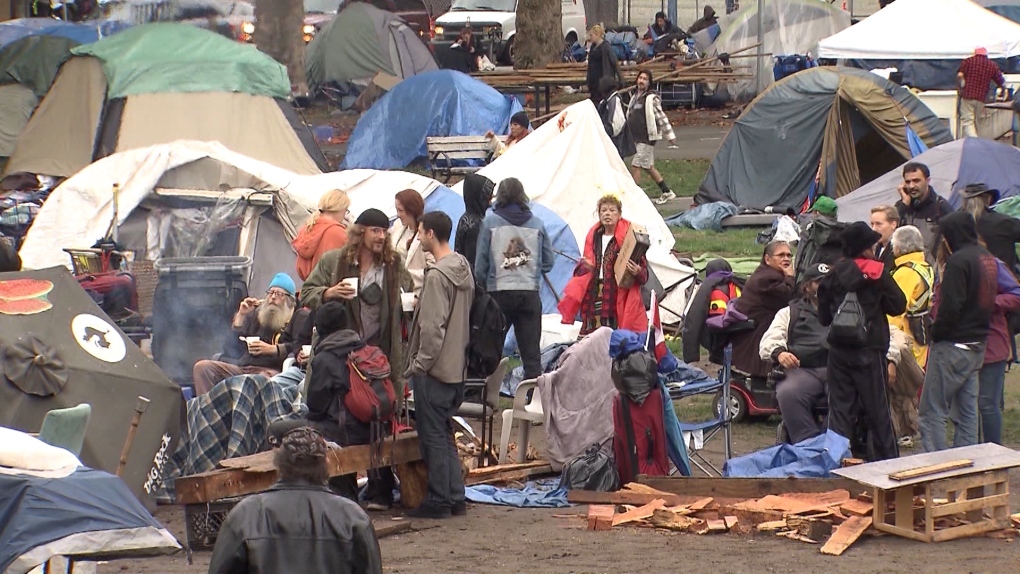 VANCOUVER -- A conditional injunction is now part of what a Vancouver board calls its "decampment plan" for a downtown park being used as a homeless camp.

In a statement Tuesday morning, the Vancouver Park Board said an injunction will support the eviction of a group of people calling Oppenheimer Park home, but only once conditions are met.

Among those conditions are that a third party be brought in to conduct an assessment of the situation in the park at Cordova Street and Jackson Avenue.

The assessment will include recommendations to enhance safety, provide support and seek shelter for those currently living in the park.

"This work will be done with a commitment to the principles of reconciliation and in consultation with those in the park," the board's statement said.

The park board asked staff to revise the current Vancouver bylaw that precludes people from staying in parks. They've been asked to "bring the bylaw up to current standards" based on other cities' regulations and on legal precedent.

The board has authorized the city's general manager to seek an injunction when conditions have been met.

"While we know this will take time, I am optimistic that we have developed a plan to improve conditions for people experiencing homelessness in Oppenheimer Park and to move toward a safe resolution to the current encampment in the park," park board chair Stuart Mackinnon said in a statement.

"The board is committed to enacting a compassionate and holistic approach to this difficult and complicated challenge that touches everyone in our community."

The board's decision to permit an injunction comes more than two months after a vote at an emergency meeting in which the board voted the opposite way.

At the end of September, representatives from the city and its fire and police departments called for an injunction to clear out the camp, but the board voted "no" at the time. Instead, it voted in favour of collaborating with the city to find alternative housing for residents.

The request followed an announcement from the City of Vancouver that it had spent nearly $1 million on dealing with issues in the park in the first eight months of the year.

Concerns were raised again this weekend, with the city saying many have been forced to break the law to keep warm.

Another issue raised by the city is the amount of garbage coming from the site – about two tons in the last two weeks. And police say crime has decreased in the park because of a continued police presence, but violence has been an issue this year, including in October when a woman was accidentally shot by her own son.

Residents of the park have also been critical, saying last month that they were "sick and tired of these games that city hall is playing."

The portable toilets hadn't been cleaned in weeks and were making people sick, they said, and the permanent washroom was closed at the time for plumbing issues.

"These games are impacting the lives of 150 people and adding additional stresses and pressures on already vulnerable people," Chrissy Brett said last month in a statement.

This is a developing news story and will be updated throughout the day.