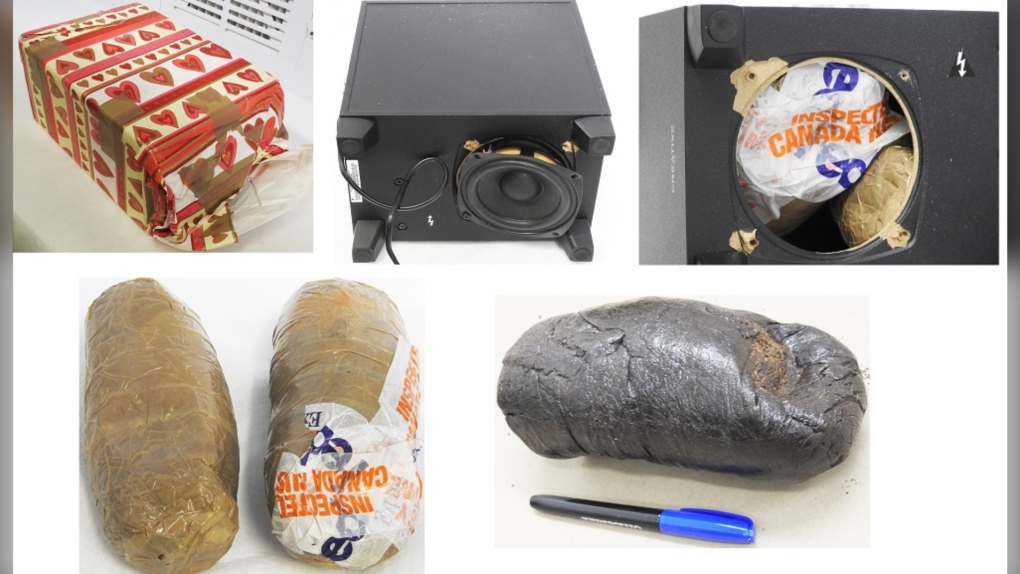 A photo from B.C. RCMP shows how opium was allegedly smuggled into Canada.

A man from British Columbia was sentenced to several years behind bars following the import of opium from overseas to Canada.

The RCMP said in a news release Friday that the man was sentenced last month to three years imprisonment following his conviction.

According to Mounties, the Canadian man was sentenced at the end of April for his role in the import of two kilograms of opium.

The investigation began back in 2017, when Mounties in B.C. initiated an investigation with authorities in Germany into a transnational drug importation operation.

The investigation began with the arrest by German federal police of Hamid Nemati Shirazi, who was taken into custody on drug trafficking allegations. Following his arrest, German federal authorities said they found shipment details for a package they believed to contain opium, and reached out to the RCMP about the package, which was being shipped to Canada.

The package was meant to be sent to Coquitlam, B.C., but was intercepted in Toronto by Mounties and members of the Canada Border Services Agency, who had been tipped off and were waiting for it. The B.C. RCMP took conduct, given the intended destination.

Mounties say the package contained a speaker, inside of which the opium was hidden. Photos released by the RCMP show the box was covered in wrapping paper with a heart pattern, making it look like a gift instead of a drug shipment.

And it appears the speaker wasn't the only way opium was concealed and then shipped to Canada.

Through the investigation police identified a Canadian suspect, Hamid Modrek Najafabadi, and in a search of his home found cash and hollowed out water pumps.

According to police, these pumps were consistent with previous opium shipments that were under investigation in Germany.

Modrek Najafabadi was charged with possession for the purpose of trafficking over the intercepted opium, as well as importing a controlled substance.

He was then sentenced on April 29. In addition to the prison sentence, he's been ordered to submit his DNA to authorities and prohibited from owning weapons.

Nemati Shirazi was also sentenced by a German court to 5.5 years in prison, and seizure of about $75,400 of his personal assets.

"According to the United Nations Office on Drugs and Crime (UNODC), the world’s major Opium producers that include Afghanistan and Myanmar have been ramping up production, with the 2021 opium harvest in Afghanistan increasing to 6,800 tons," the RCMP said in a news release about Modrek Najafabadi's sentence.

"UNODC states this could translate to flooding the global drug market with around 320 tons of pure heroin, which according to the Centers for Disease Control and Prevention (CDC), further exacerbating the opioid crisis as heroin is often mixed with the more potent and deadlier synthetic opioid, fentanyl."

In B.C., teams that specialize in transnational organized crime groups are mandated to target those whose criminal activities have implications for Canada.

These investigations are complicated and take time, often involving partners both in Canada and around the world.

As for why this particular case took so long to make it through the legal system, the RCMP gave a few reasons.

There was a preliminary hearing in 2018, but the first trial, which had been scheduled for 2019, was adjourned by the defence due to health reasons.

It was meant to be back in court in February 2020, but there were health concerns again, followed by pandemic-prompted court closures.

The trial was heard in March of last year, and Modrek Najafabadi was convicted in June. Sentencing was then delayed by a change of lawyers.

Modrek Najafabadi was not in custody during that time, so he does not get any credit for pre-sentencing time served.

Many Canadians remain unaware of the involvement of forced child labour in the products they buy, according to non-profit agency World Vision Canada.

As Pride festivities kick off around the world, many refugees are celebrating the LGBTQ2S+ community for the first time.

Prime Minister Justin Trudeau headed to the G7 summit in Germany on Saturday without a consensus from the Commonwealth to condemn the Russian invasion of Ukraine, but with a chorus of countries calling for help to overcome the fallout of the war.

WHO panel: Monkeypox not a global emergency 'at this stage'

The World Health Organization said the escalating monkeypox outbreak in nearly 50 countries should be closely monitored but does not warrant being declared a global health emergency.

A barge that ran aground near Vancouver's English Bay last year quickly became an accidental attraction, drawing selfie-seekers and inspiring T-shirt designs. But after seven months, residents seem to have grown weary of its hulking presence on the shoreline.

Ukraine's largest LGBTQ rights event, KyivPride, is going ahead on Saturday. But not on its native streets and not as a celebration.