Only 2 regions of B.C. had COVID-19 test positivity rates of 10% or lower last week 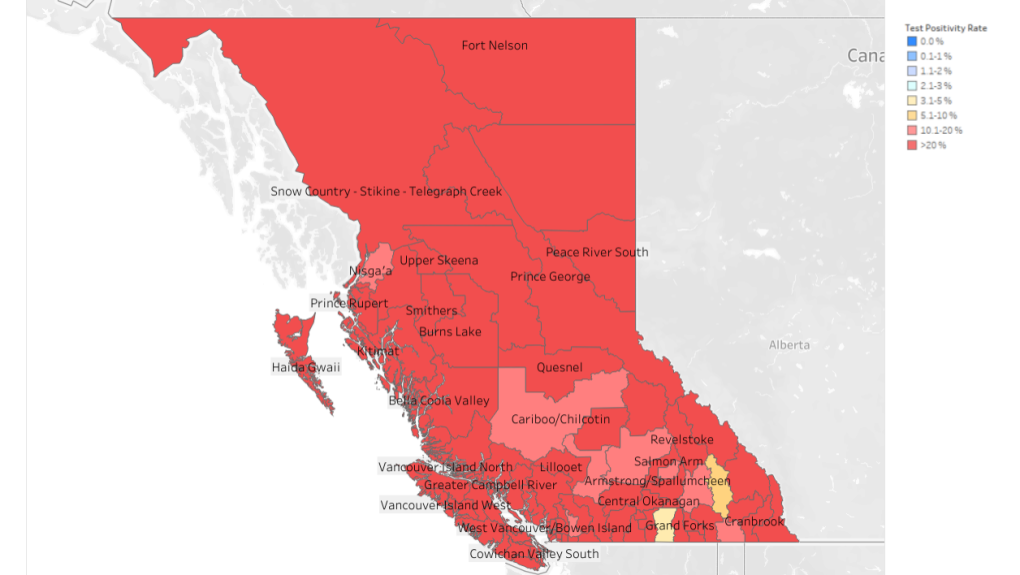 The BCCDC's COVID-19 Surveillance Dashboard is seen in this screenshot from Jan. 13, 2022.

With B.C.'s COVID-19 testing system at capacity due to the Omicron variant, the province has prioritized tests for those most in need of them, sending test positivity rates skyrocketing.

According to data from the B.C. Centre for Disease Control's COVID-19 Surveillance Dashboard, there were only two local health areas in the province where test positivity was 10 per cent or lower between Jan. 4 and 10.

Indeed, only a handful of regions saw less than 20 per cent positivity during the seven-day period.

The lowest rate for the week belonged to Interior Health's Kettle Valley region, where just five per cent of publicly funded tests came back positive. The only other region where fewer than 11 per cent of tests were positive was Kootenay Lake, which saw a 10 per cent positivity rate, according to the BCCDC.

Notably, Kettle Valley and Kootenay Lake are among the least populous local health areas in all of B.C. They are the eighth and ninth smallest of the province's 89 local health areas, according to 2021 provincial population estimates, with roughly 3,600 residents each.

Small populations alone can't account for their relatively lower rates of COVID-19 transmission, however. The three smallest local health areas in the province - Snow Country, Stikine and Telegraph Creek, which are grouped together on the BCCDC map because of their low populations - had a positivity rate of 28 per cent during the week in question.

That total is much more in line with the test positivity rate seen province-wide during the seven days shown on the map. From Jan. 4 to 10, B.C.'s rolling seven-day average for test positivity ranged from 23.1 per cent to 24.1 per cent, according to BCCDC data.

Of course, many regions of the province saw much higher test positivity rates over the week.

In the area that includes most of the City of Surrey, 43 per cent of tests were positive. Rates also topped 40 per cent in two of the other local five health areas that make up the City of Vancouver, as well as in the Tri-Cities and Maple Ridge-Pitt Meadows local health areas.

In the Interior, positivity was 48 per cent in the Revelstoke local health area, 44 per cent in Fernie and 43 per cent in Summerland and Nelson.

Northern Health saw its highest rates in Kitimat, where 51 per cent of tests came back positive, and Smithers (49 per cent).

Ukrainian President Volodymyr Zelenskyy accused Russia of waging "total war," seeking to inflict as much death and destruction as possible as in three months of conflict, as fighting raged Tuesday in the eastern Donbas region.

China is trying to navigate its biggest coronavirus outbreak without a tool it could have adopted many months ago, the kind of vaccines that have proven to offer the best protection against the worst outcomes from COVID-19.