One dead in fiery single-vehicle crash in Burnaby

One dead in fiery single-vehicle crash in Burnaby 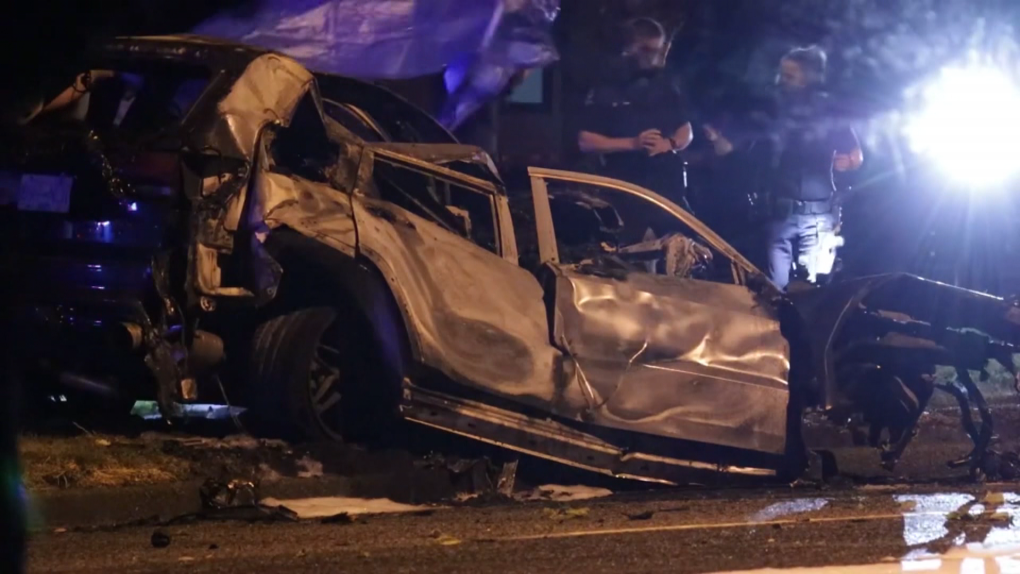 One man is dead after a serious crash along the Burnaby-Vancouver border.

Police and firefighters from both Burnaby and Vancouver were called to Boundary Road near Canada Way at about 12:45 a.m. after reports of a vehicle fire as a result of a collison.

“Unfortunately, the driver was found deceased immediately when they did arrive on scene due to the severity of the collision itself,” said Staff Sgt. Maj. David Douangchanh during a news conference late Tuesday morning.

Investigators say a black Jeep Cherokee was travelling northbound on Boundary Road when it plowed into a tree and caught fire.

The driver was the only person inside. He was trapped in the vehicle and died on scene.

“We would like to thank the multiple witnesses who attempted to save the driver and contacted emergency services,” said Cpl. Alexa Hodgins of the Burnaby RCMP.

“We understand that this type of event can be traumatic, however the actions of the witnesses are nothing short of heroic,” said Hodgins.

Two of those Good Samaritans were taken to hospital for minor smoke inhalation.

“We hope they have a speedy recovery, and we do commend them for their actions,” said Douangchanh.

Video taken moments after the attempted rescue shows the SUV fully engulfed in massive flames with small explosions happening inside.

Police say speed was a factor in the crash.

“The speed is yet to be determined on how fast, however, we do believe it was excessive speed that did contribute to the cause of the collision itself,” said Douangchanh..

It was a high impact crash, the airbags were deployed, the vehicle was almost unrecognizable, and there were crushed car parts all over the road.

“We don't believe there's any other factors in play or any other vehicles in play in question at this time,” said Douangchanh.

First responders later placed a tarp over the driver's side of the mangled vehicle.

It took firefighters several hours to dismantle the crumpled vehicle enough so the coroner’s service could remove the body.

The SUV came to a stop in the centre median but Burnaby RCMP’s Criminal Collision Investigation Team has taken over the investigation.

Police are asking anyone who witnessed the crash or may have dash-cam video from Boundary Road between Grandview Highway and Kingsway Avenue between 12:00 a.m. and 1:00 a.m. to contact Burnaby RCMP at 604-646-9999.

Boundary Road between Canada Way and 22nd Avenue was closed in both north and south directions for about eight hours, but has since reopened.

Salman Rushdie, the author whose writing led to death threats from Iran in the 1980s, was attacked Friday as he was about to give a lecture in western New York.

The August 'sturgeon moon' has passed over Earth: Here is what it looked like

Rising over beaches, buildings and statues, the last supermoon of the year created ample viewing and photo opportunities around the world Thursday night.

The City of Toronto is investigating a power outage that left a large swath of the downtown core including office buildings, a major mall and a university campus without electricity yesterday.

Former U.S. President Donald Trump has called for the 'immediate' release of the federal warrant the FBI used to search his Florida estate, hours after the Justice Department had asked a court to unseal the warrant, with Attorney General Merrick Garland citing the 'substantial public interest in this matter.'