Animal experts are urging the public to stop feeding wildlife after footage emerged online of a sea lion pulling a young girl into the water at the Steveston Wharf in Richmond.

“I really think the animal was just frustrated,” the Vancouver Aquarium’s Danielle Hyson told CTV Vancouver, adding that the sea lion likely reacted after the humans in the video stopped feeding it.

“Unfortunately that animal looks like he’s very habituated to people because of the feeding that he’s learned over time,” she said. “It’s an easy meal to get in Steveston.”

We're getting up close and personal with a sea lion at a @vanaqua research facility today—and learning more about the animals' behaviour. pic.twitter.com/qWkSKHFwFU

The two-minute video in question shows people on the dock observing the animal and trying to catch its attention using hand gestures. At one point, the sea lion rises out of the water and approaches the girl, seen in the video wearing a white dress, before coming up for second time to pull her in. A male family member jumps in after the girl before the two are pulled to safety by the crowd on the dock.

Officials are hoping the dramatic footage will make visitors at the harbour think twice before feeding the sea lions.

Steveston Harbour Authority chairman Robert Kiesman told CTV Vancouver officials and fishermen on the docks are constantly warning the public against feeding the animals, but that those warnings are often ignored.

“We’re actually hoping that all the media attention we’re getting on this weekend will actually turn out to be a good thing—that people will actually see why these rules are in place,” Kiesman said. “After all, it is illegal to feed sea lions, but now they’ll see why it’s actually dangerous.”

The authority has also put up more warning signs in a bid to stop the public from feeding the sea lions in the area. 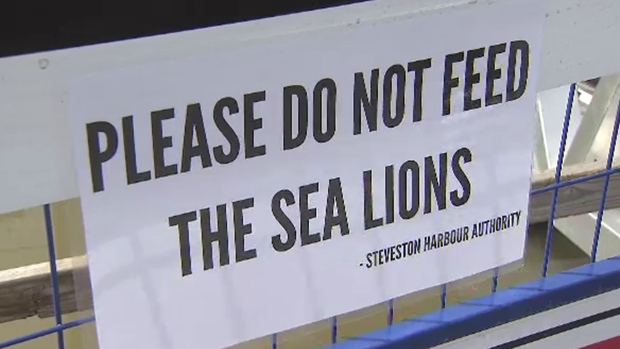 The video was captured at around 6:45 p.m. on Saturday by Simon Fraser University student Michael Fujiwara. The student later posted the video online with the caption: “I captured a scary moment of a seal dragging a young girl into the water at the #Richmond Steveston Wharf.”

The student’s video has been liked and shared hundreds of times on Twitter and has been watched more than 10 million times on YouTube.

With files from CTV Vancouver’s Nafeesa Karim and Sarah MacDonald