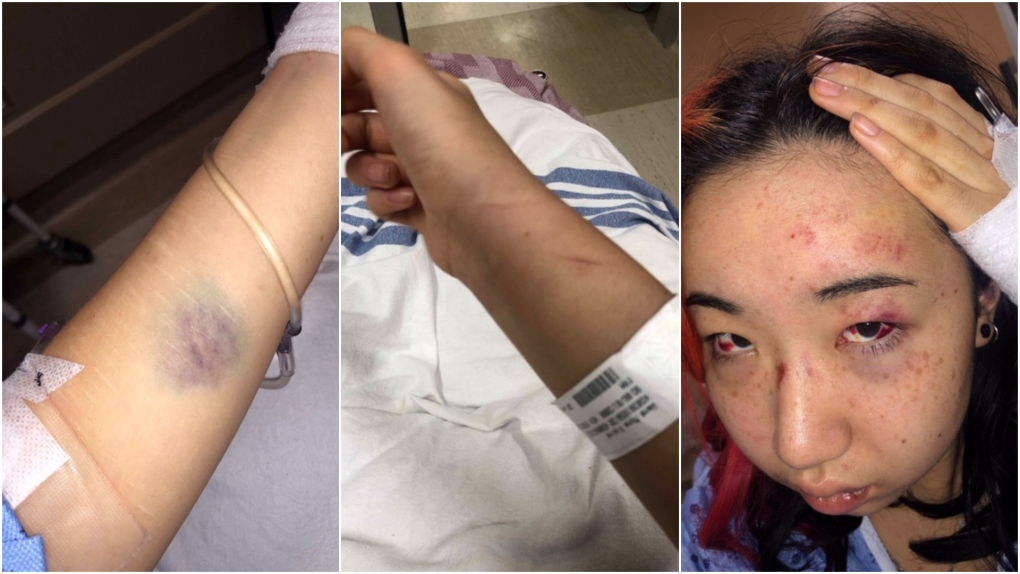 Injuries alleged by Mona Wang to be the result of an encounter with a Kelowna, B.C. RCMP officer are shown in provided images.
Vancouver -

The B.C. nursing student who was dragged by a police officer during a wellness check in Kelowna, B.C., last year has settled her lawsuit against the RCMP.

Surveillance video captured Cpl. Lacey Browning dragging Mona Wang face-down across an apartment building lobby in January 2020, then stepping on her head. Wang was handcuffed and only wearing a bra and leggings at the time.

The university student confirmed that she settled her lawsuit in a statement on Friday afternoon.

"The settlement was a compromise, which means no one got exactly what they wanted. I settled to move on with my life," Wang wrote.

"If there is anything to take away from my story, it is to treat each other with kindness and reach out for help if you need it. You are not alone, and you deserve happiness."

Wang added that she won't feel justice is served unless Browning is charged in connection with the incident and not allowed to remain with the RCMP.

Staff Sgt. Janelle Shoihet said the findings of a criminal investigation have been sent to the B.C. Prosecution Service for charge assessment. An internal code of conduct probe is also ongoing, and Browning remains assigned to administrative duties in the meantime.

According to Wang's lawsuit, she was in a "state of semi-consciousness" when the RCMP officer arrived at her apartment. Her boyfriend had been concerned about her wellbeing and called emergency services for help.

Wang alleged she was punched in the head, and suffered injuries to her face, upper thigh, right breast, sternum and forearms during the incident.

Statements of defence filed by Browning, the Attorney General of Canada and B.C.'s minister of public safety and solicitor general denied any wrongdoing, and said the officer used no more force than was reasonable and necessary.

One statement said Browning struck Wang with an open palm to subdue her after the student allegedly began yelling and swinging her arms at the officer.