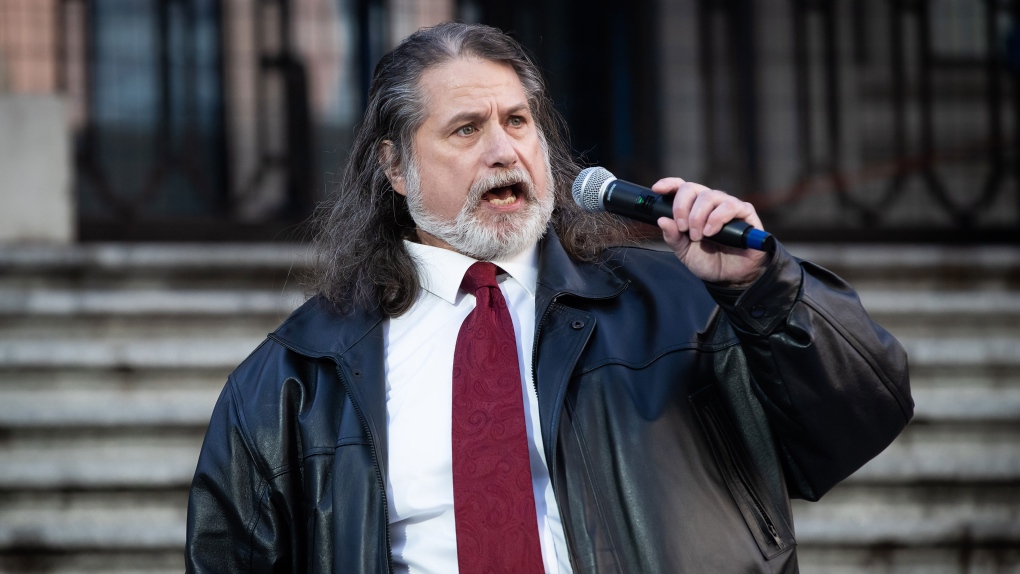 VANCOUVER -- Several nurses and a doctor are listed among the guest speakers at a planned rally against COVID-19 restrictions in downtown Vancouver this weekend, raising concerns about the possibility of medical professionals lending legitimacy to misinformation.

The "BC Grand Freedom Rally" event is being held outside the Vancouver Art Gallery on Saturday afternoon, and former Canucks anthem singer Mark Donnelly is scheduled to appear as well.

At previous events, Donnelly has railed against social distancing, masks and restrictions as "ineffective, unnecessary and harmful."

One of the speakers is Kristen Nagle, the neonatal intensive care nurse from Ontario who was fired after attending an anti-lockdown rally in Washington, D.C. on the day of the Capitol riot.

There are also two health-care workers from B.C. on the speakers list.

It's unclear what the billed health-care workers are planning to say on Saturday, but a poster for the rally promises "COVID & vaccine truths revealed by real medical experts."

Last month, the Federation of Medical Regulatory Authorities in Canada issued a statement that doctors "must not make comments or provide advice that encourage the public to act contrary to public health orders and recommendations."

Dr. Rhonda Low said that's important because physicians hold a position of trust in the eyes of the public.

"If they're making comments that fly in the face of evidence, that's concerning," she said.

Rallies like the one planned on Saturday have been a "source of frustration to physicians and other health-care professionals who are working hard to save the lives of patients in the hospital who are dying of COVID," Low added.

The B.C. College of Nurses and Midwives told CTV News it couldn't comment on Saturday's rally without knowing what will be said, and that it wouldn't be appropriate to broadly regulate nurses' behaviour outside of work.

"However, if there is a link between a nurse's off-duty conduct and the profession that demonstrates a sufficiently negative impact on the profession or the public interest, we would act," spokesperson Johanna Ward said in an email.

If the college receives any complaints as a result of the rally, those will be investigated, Ward added.

Provincial health officer Dr. Bonnie Henry cautioned this week that the average number of COVID-19 infections identified per day been has been increasing in some areas of B.C., which officials have blamed on a lack of adherence to province-wide restrictions.

Earlier this month, Henry suggested some of those restrictions could be relaxed at the end of February, but only if the province could sufficiently control the spread of the disease.

The Vancouver Police Department said officers will be on scene for Saturday's event. The department has so far taken a softer approach to rallies than the Kelowna RCMP detachment, which has issued thousands of dollars in fines to the organizer of a recurring rally in that city.

Asked whether officers might issue fines during Saturday's event, VPD spokesperson Const. Tania Visintin noted that police can "exercise their discretion in the enforcement of public health orders."

"They must weigh a citizen’s right to peacefully protest with the current potential harm of gatherings," Visintin told CTV News in an email. "Mass arrests are not possible or desirable. Ticketing and arrests could escalate an already passionate situation, and when there are larger groups of people, the risk of injury to both protesters and police officers rises."

Visintin added that participating in a protest "does not automatically guarantee anyone special privileges," and that people caught contravening B.C.'s public health order could be ticketed.