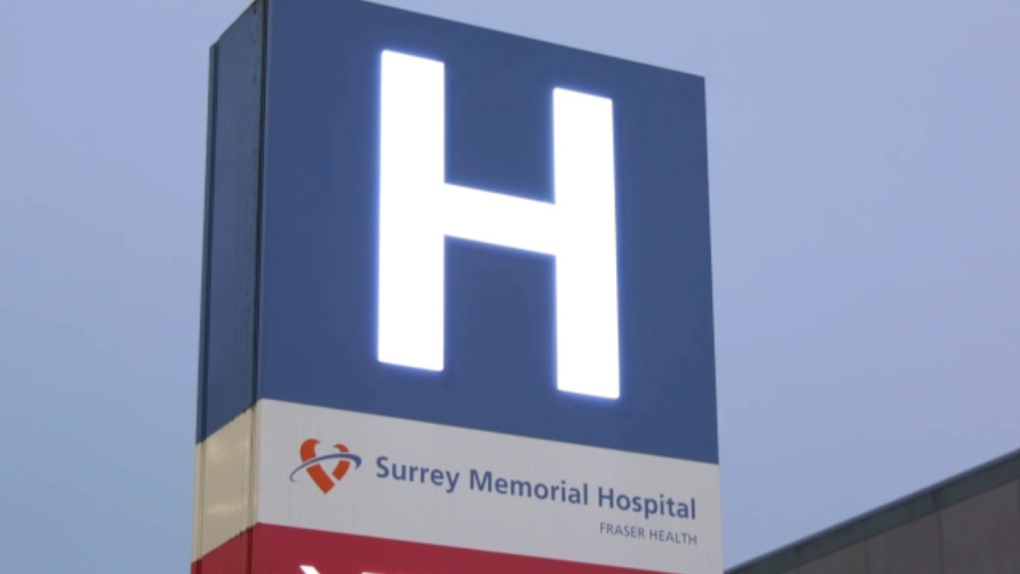 A sign at the entrance to Surrey Memorial Hospital is seen on Saturday, Feb. 5, 2022. (CTV)

For the first time since early July, there are fewer than 400 people in B.C. hospitals with COVID-19.

The 385 patients in hospital as of Thursday is the lowest total the B.C. Centre for Disease Control has recorded since July 7, but it's also a fairly small drop from what the hospital population has been for the last four weeks. 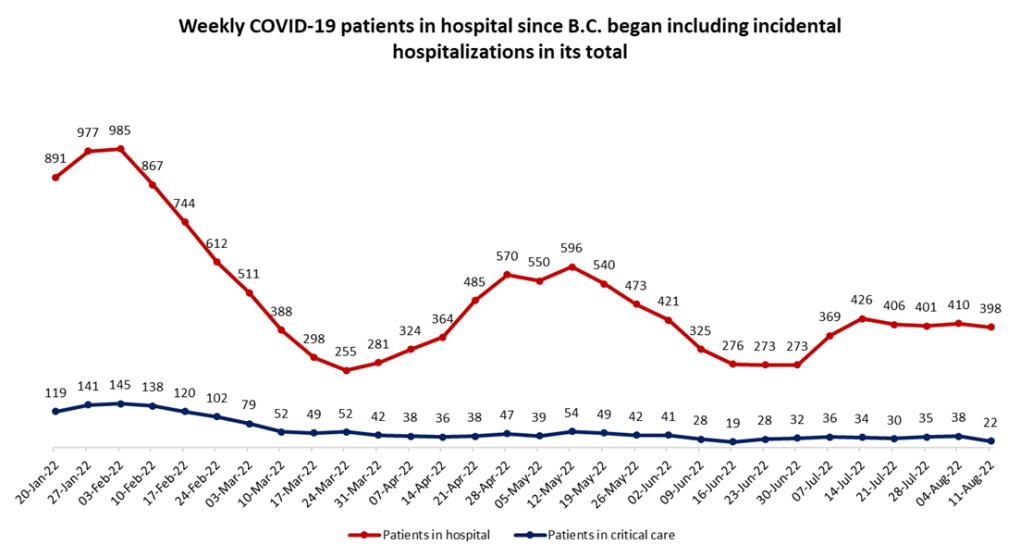 The number of COVID-positive patients in B.C. hospitals on Thursdays since January is shown. (CTV)

The number of coronavirus patients in critical care dropped more significantly this week, falling from 38 last Thursday to 22 this week, the lowest that number has been since June 16.

The BCCDC's weekly hospitalization totals include both those with serious cases of COVID-19 and those who are admitted to hospital for other reasons and test positive incidentally. Since the province switched to this "hospital census" method of counting in January, there have been as many as 985 people in hospital on a Thursday and as few as 255.

Hospitalizations are generally considered a lagging indicator of COVID-19 transmission, meaning they tend to start increasing or decreasing a week or more after infections do.

In B.C., this effect is mitigated, somewhat, by the fact that the latest available data on transmission is nearly a week old.

The BCCDC reports new, lab-confirmed cases and wastewater surveillance data by "epidemiological week," a time-frame that runs from Sunday to Saturday. The most recent data on COVID-19 cases in B.C., therefore, is from the week that ended Aug. 6.

Like the hospitalization data, positive lab tests and wastewater surveillance have been showing a plateau or slight decline in coronavirus transmission in recent weeks.

The BCCDC's weekly report shows 900 new positive tests for the week of July 31 to Aug. 6, down slightly from the 983 reported during the previous epidemiological week.

These totals reflect only the results of lab-based tests, which are not available to most British Columbians with COVID-19 symptoms under the province's current testing strategy. The BCCDC does not collect or report the results of at-home rapid tests, meaning the vast majority of COVID-19 cases in the province are not officially tracked.

Wastewater surveillance data from Metro Vancouver can provide some insight into the spread of the coronavirus among people not included in the official total.

Like the official case count, wastewater data has suggested flat or declining transmission in recent weeks.

"Though there continues to be week-to-week variability, SARS-CoV-2 viral loads generally continue to decrease from their most recent peak in late-June or early-July in Metro Vancouver wastewater," the BCCDC says in its latest situation report, which covers wastewater data through Aug. 6.

Also included in the situation report is an update on deaths caused by COVID-19 in B.C.

Since April 2, the province has been reporting "30-day, all-cause mortality," a figure that includes anyone who dies within 30 days of a positive COVID-19 test. The province's Vital Statistics agency then determines whether the coronavirus was the underlying cause of death, a process that can take eight weeks.

According to the BCCDC, Vital Statistics has identified 363 COVID-caused deaths that occurred between April 2 and July 30, or about 3 per day.

The vast majority of deaths continue to be among those ages 80 and older, but the latest report shows at least one person in every age group but one has succumbed to COVID-19 in the last four months.

B.C. administered 25,256 doses of COVID-19 vaccine during the week of July 31 to Aug. 6, the lowest weekly total since the first week of April.

Another 6,016 doses – about 24 per cent – were first shots. That's the highest number of first doses administered in months, and more than four times the number administered in the last week of July, a fact that likely reflects the inclusion of the newly eligible under-five age group in the total.

The province has estimated that there are about 208,000 children in this age group, which became eligible for COVID-19 vaccines in B.C. as of Aug. 2.

Last week, the Ministry of Health told CTV News just 13,606 of those children – or about 6.5 per cent – had been registered for vaccination.

This story has been updated to reflect a change to the number of patients in hospital and critical care according to the BCCDC's COVID-19 dashboard.

Brazil's top two presidential candidates will face each other in a runoff vote after neither got enough support to win outright Sunday in an election to decide if the country returns a leftist to the helm of the world's fourth-largest democracy or keeps the far-right incumbent in office.