Number in hospital with COVID-19 in B.C. largely unchanged

Number in hospital with COVID-19 in B.C. largely unchanged 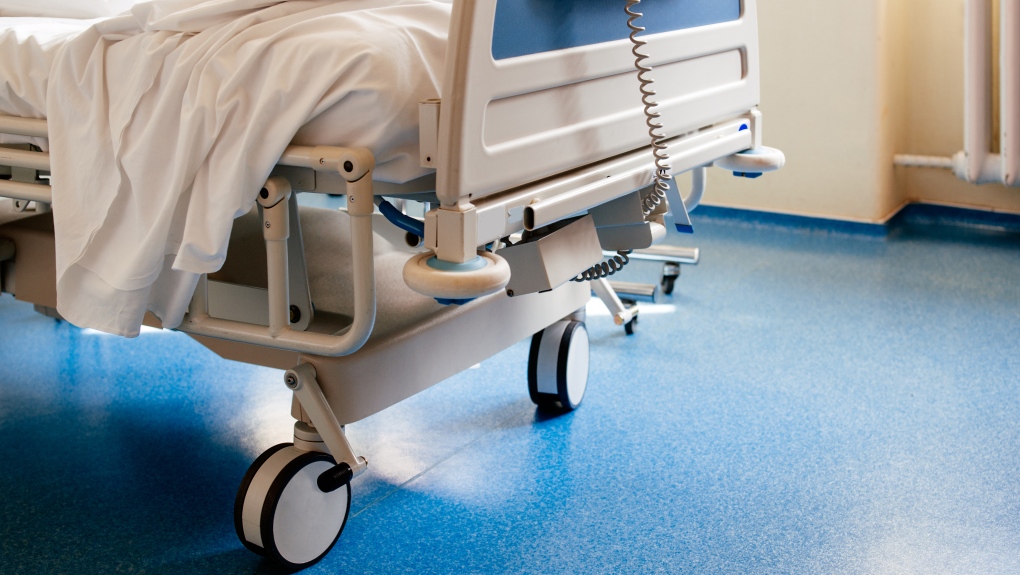 Update, Aug. 20: The B.C. Centre for Disease Control says its dashboard was "mistakenly updated" with incomplete data on Thursday, and the true number of people in hospital should have been 390, not 366. More information on this error can be found here. The original story follows.

The number of patients with COVID-19 in B.C. hospitals declined slightly this week, as an independent modelling group says the province's latest wave of infections has passed its peak.

There were 366 test-positive patients in hospital as of Thursday, down from 385 at this time last week. The number of patients in critical care was essentially unchanged, down to 22 from 23. 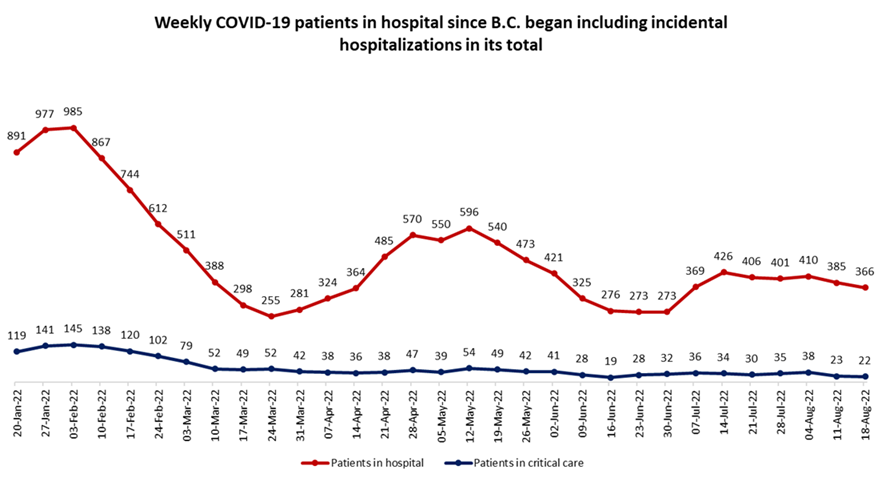 The number of people in B.C. hospitals with COVID-19 on Thursdays since January 2022 is shown. (CTV)

The hospital population reported each week by the B.C. Centre for Disease Control includes both those who have severe cases of COVID-19 requiring hospitalization and those who were admitted to hospital for other reasons and tested positive incidentally.

Since the province switched to this "hospital census" model for counting hospitalizations, B.C. has seen as many as 985 people in hospital with COVID-19 on a Thursday and as few as 255.

The decline in the hospital census comes as the latest report from the independent BC COVID-19 Modelling Group suggests the most recent wave of infections has peaked.

"Reported case numbers, the number of people in hospital and the number in ICU are stable or declining slightly in B.C.," the report reads.

It also estimates that underreporting of COVID-19 infections in the province – which has been known to be substantial since the start of 2022 – is off by a factor of about 100.

If that estimate is correct, the 877 new infections reported Thursday by the BCCDC – which were recorded via lab-based testing during the week of Aug. 7 to 13 – equate to an actual total of roughly 87,700 new cases province-wide.

That total would imply that more than 12,500 British Columbians were catching COVID each day during the week in question.

Sarah Otto is a member of the modelling group and a professor of biomathematics at the University of British Columbia. On Wednesday, she told CTV News that she views estimates of the true spread of the coronavirus in the province as "a public service" that can help people gauge what precautions to take at a given time.

Like cases, hospitalizations and critical care admissions, concentrations of COVID-19 in Metro Vancouver wastewater have been stable or declining in recent weeks.

In its latest "situation report," the BCCDC notes that wastewater sampling continues to show "week-to-week variability," but concentrations of the coronavirus have been decreasing since their most recent peak in late June or early July.

Though all indicators point to B.C. being on the downslope of the most recent COVID-19 wave, Otto cautioned that the amount of virus circulating in the community remains high, and said people should be wearing masks and avoiding indoor gatherings if they want to avoid getting sick right now.

Nearly everyone in B.C. has COVID-19 antibodies, whether from vaccination or past infection, according to data from the national COVID-19 Immunity Task Force.

Because immunity wanes over time, however, the province has been planning a "fall booster" vaccination campaign, urging people to get another dose of vaccine beginning in September.

Adults who want to get a second booster dose before September can call to book an appointment, even though it's discouraged.

According to the BCCDC's COVID-19 dashboard, 24,243 doses of vaccine were administered during the week that ended Aug. 13.

Just over half of those doses (12,519) were fourth shots, also known as second boosters.

The federal government has begun its search for an organization to administer an endowment fund aimed at bolstering the economic and social well-being of Black Canadians.

Indonesian police said they were investigating over a dozen officers responsible for firing tear gas that set off a crush that killed 125 people at a soccer match, as families and friends grieved Monday for the victims that included 17 children.

Nobel win for Swede who unlocked secrets of Neanderthal DNA

Swedish scientist Svante Paabo won the Nobel Prize in medicine Monday for his discoveries on human evolution that provided key insights into our immune system and what makes us unique compared with our extinct cousins, the award's panel said.

Hurricane Orlene is poised to strike Mexico Monday, bringing heavy rain and the potential for severe flooding to popular resort areas along the west coast.