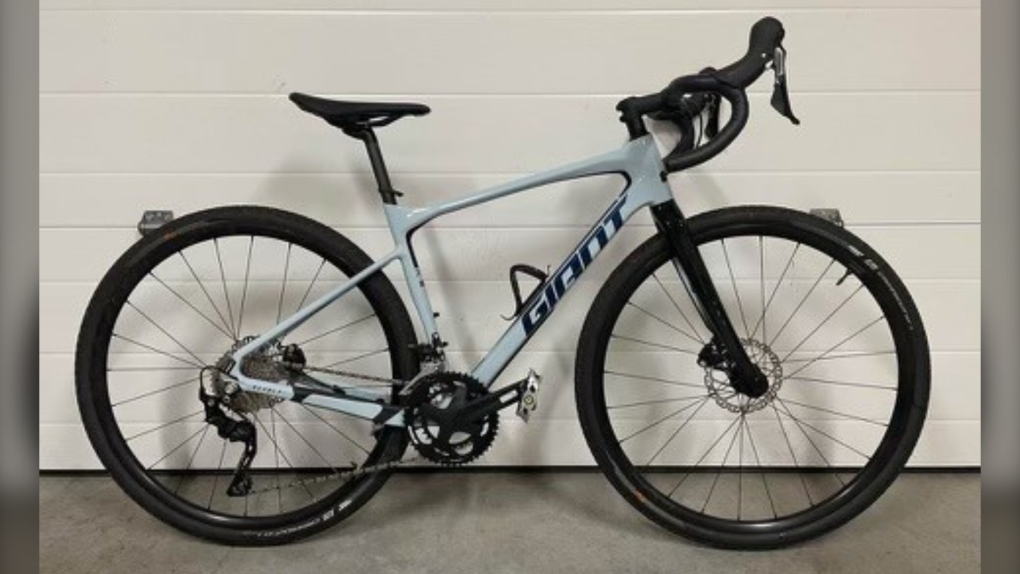 A North Vancouver couple were able to recover a stolen bicycle because of an Apple Airtag that led them to the location where it was being held.
North Vancouver, B.C. -

Half a dozen bicycles have been stolen from the storage locker of his North Vancouver townhouse complex this year, so Travis – who asked CTV News not to use his last name – wasn’t surprised when his wife’s bike disappeared in August.

The couple replaced it two weeks ago, but they knew they had to take extra precautions. So they bought an Apple Airtag, a small GPS-like tracker that works by connecting to nearby internet-enabled Apple devices, and hid it on the bike.

This past Saturday, a neighbour alerted them that the new $3,000 bike had just been stolen from the storage locker, along with several others.

“The first thing that we did now that we had the ability to track her bike is we got on our phones and we were able to pinpoint where the trackable device was, where the Airtag was,” said Travis.

They were shocked to see it was only three blocks away from where they were having lunch in lower Lonsdale. After walking the area for 45 minutes, they were able to track the Airtag’s signal to an underground parkade.

“The way the Airtags work is once you get in a 50 metre radius of them, your phone can actually connect to it and it will give you a very precise location,” said Travis. “So, at that point, we knew we were very, very close to it. We had some suspicions about who might have been in possession of it in the parking garage, but not wanting to contact or make accusations, we just waited for North Vancouver RCMP.”

“The police encountered two males near a vehicle, suspicious looking males, and they engaged in conversation," said Sahak. "Once the victim saw the vehicle, he noted there was bicycles inside the vehicle and pointed out that one of the bicycles was his, which formed our grounds to arrest the two suspects.”

The two men of no fixed address have lengthy criminal records. Sahak says Travis was smart to place the Airtag on the bike, and to not personally confront the suspects when he discovered they had the bike.

“We definitely don’t want people taking matters into their own hands and being vigilantes,” Sahak said. “Everything the man did was correct. He made sure his property was protected, he used a device properly, and waited for police when he did go to the parkade.”

Travis said he recognized other bikes in the suspect vehicle that belonged to neighbours in his townhouse complex. They’ve all been recovered thanks to the Airtag, which is also being used frequently to track lost luggage.

“I had my reservations about how well this would work, but I had read a number of stories similar to this one online that said it gives you a fighting chance of recovering your property,” Travis said. “And for the $30 to $40 it costs us to put these on the bikes, we figured that was at least worth it given the climate we have with bike theft in our area right now.”

His wife is still waiting to get her bike back from RCMP. But when it’s returned, he’ll make sure the tracker is still on it.

Correction: A previous version of this article identified Apple Airtags as GPS devices.

The beginning of February is expected bring Arctic-like temperatures across much of Eastern Canada, thanks to frigid air from the polar vortex. The cold snap will descend on Eastern Canada this week, with temperatures becoming seasonable again on Sunday. In between, much of Ontario, Quebec and Atlantic Canada can expect the coldest days yet this winter.

MPs on the Procedure and House Affairs Committee are recommending that hybrid Parliament and the electronic voting system become permanent features of the House of Commons.

Bobby Hull once proudly said that he played the way he lived -- straightforward. The Hockey Hall of Famer, who electrified fans through the 1960s and 70s, died on Monday at the age of 84. Hull played for the NHL's Chicago Blackhawks before a jump to the Winnipeg Jets of the upstart World Hockey Association in 1972, a move that led to lawsuits but ultimately higher salaries for hockey players.

Quebec RCMP say they rescued a man over the weekend who became lost in the woods in heavy snow while trying to cross the border into the United States.

Michael Jackson's nephew to star in King of Pop biopic

Michael Jackson's 26-year-old nephew, Jaafar Jackson, will play the King of Pop in the planned biopic "Michael" to be directed by Antoine Fuqua.