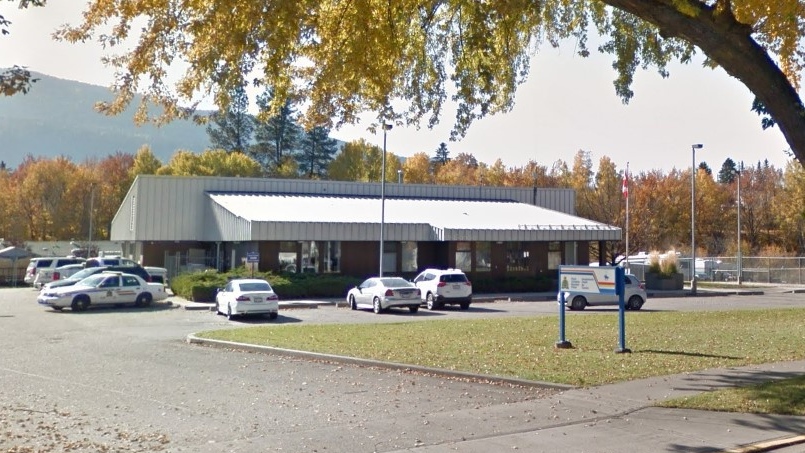 The Grand Forks RCMP detachment is seen in a Google Maps image captured in October 2018.

An officer from the Grand Forks RCMP detachment will not face charges for shooting a suspected drunk driver during a tense confrontation four years ago, prosecutors announced Friday.

In explaining the decision, the B.C. Prosecution Service said the driver was accelerating his pickup truck toward police when the officer opened fire back in May 2018.

Three officers had tried boxing the driver in using separate RCMP vehicles, but the suspect "proceeded to ram his truck against” them in an effort to evade capture, the BCPS wrote in a summary of the incident.

One officer then positioned his cruiser "nose-to-nose" with the pickup and stepped out to make an arrest when the driver starting driving towards him again, prosecutors said.

The officer fired four shots, which struck the suspect in the shoulder and torso, leaving him in critical condition.

The suspect ultimately survived his injuries, and was later charged with assault with a weapon, impaired driving, dangerous driving and flight from police.

B.C.'s police watchdog, the Independent Investigations Office, investigated the incident and submitted a report to Crown counsel in October 2019, finding "reasonable grounds exist" to believe the officer involved in the shooting had committed an offence.

More than three years later, the prosecutors said they had reviewed the report and determined the evidence does not meet their charge assessment standards.

The IIO responded with a statement of its own Friday, pointing to "important evidence" that wasn't included in the BCPS summary of the case – namely, a video showing the officer's movements after leaving his cruiser.

The video raised questions about "whether (the officer) had in fact moved out of danger, and then moved back toward the (driver's) vehicle as it moved forward" before opening fire, according to the statement.

The IIO said the video challenges other evidence that was submitted about the officer's movements, and whether he had "objective grounds to fear for his life and safety or took advantage of a reasonable alternative means of escape" – but the watchdog accepted the Crown's position that it wasn't enough to support a prosecution.

The IIO rarely issues a proactive response to charging decisions from the BCPS, but said it wanted to do so Friday in the interest of transparency around its investigation.