'Nip it in the bud': Cougar sightings up in Tri-Cities 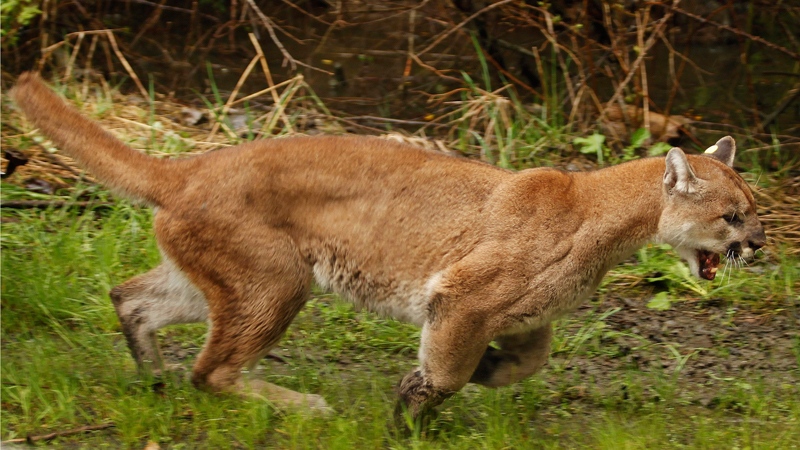 In this May 23, 2012, file photo, an approximately 2-year-old female cougar runs away from a Washington Department of Fish and Wildlife trap after being released northeast of Arlington, Wash. (Mark Mulligan/The Daily Herald via AP, File)

The number of cougar sightings reported to the BC Conservation Service around the Lower Mainland has risen significantly compared to last year.

Sgt. Todd Hunter of the conservation service says they had received 39 cougar sightings in the Tri-Cities this February, a six-and-a-half times more than they received during that month last year.

"We've received a number of calls so far in March as well," said Hunter.

As to why the number of cougar sightings has gone up, Hunter said there are a number of factors involved, such as availability of prey and human interaction.

He suggested the easiest way for residents to discourage cougars prowling around the area is to keep attractants - elements that draw animals in - to a bare minimum.

"At the lowest level, people need to make sure animals are not attracted to their properties," Hunter told CTV News.

That means not leaving any sort of food out in the open.

"If you're getting animals getting into stuff, you need to nip it in the bud, because it only makes things worse down the line."

That line, said Hunter, is the food chain: if smaller animals like mice and rats routinely get into your compost or garbage, they will eventually attract other animals that feed on them, like birds, coyotes and bobcats.

Which in turn brings cougars to the region, as they try to seek out easy prey.

Another element that could have resulted in the sighting spike is misidentification, as Hunter said anecdotally bobcat numbers have also been on the rise.

If you do happen to come across a cougar while outdoors, Hunter has some simple advice.

"If you come in close proximity to a cougar, let it leave on its own and make yourself large," said Hunter, "Never, ever, ever turn your back and run on a cougar."