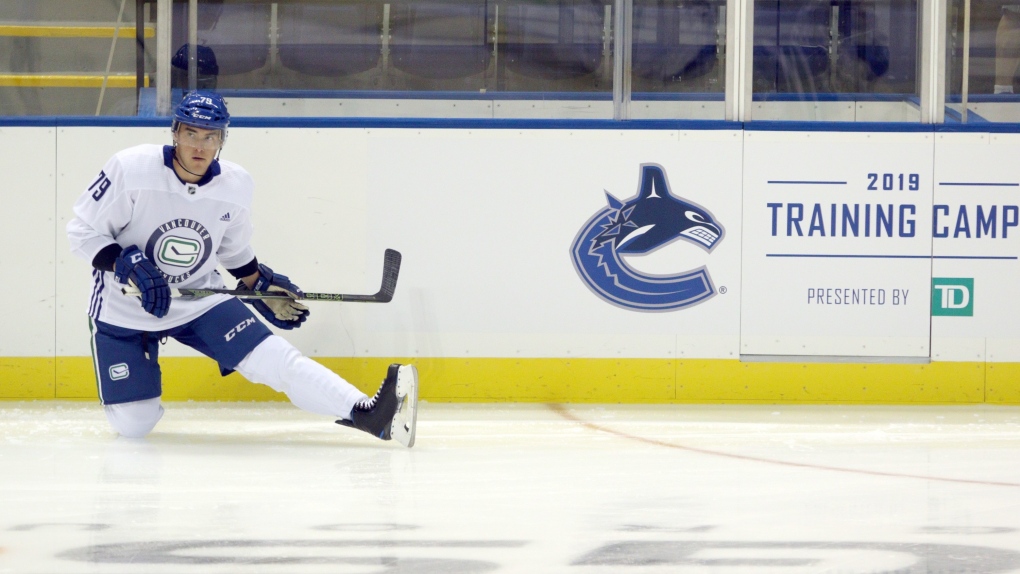 VICTORIA - Vancouver Canucks newcomer Micheal Ferland was singing the praises of Elias Pettersson on Friday after skating on a line with the NHL's reigning rookie of the year on the opening day of training camp.

“He's unbelievable,” said Ferland about Pettersson. “It's funny with those skill guys, enough is never enough with them. You see him in every drill, he just wants to be the best guy out there.”

Pettersson led the pack in a series of gruelling wind sprints coach Travis Green had the players pushing through during the first on-ice session at Victoria's Save-On-Foods Memorial Centre. The camp continues Saturday and Sunday, with an exhibition game Monday against Calgary.

“It was definitely one of the hardest skates I've had,” Ferland said.

Pettersson said Ferland will be a solid addition to the Canucks lineup.

“He's really strong on the puck and he can hit and knock guys over,” said Pettersson. “He can win puck battles with strong physicality. I'm excited to play with him.”

Ferland provides more depth and a scoring threat up front, said Pettersson, whose regular right-wing, Brock Boeser, is currently not at training camp because he is unsigned.

He said he needs more time to develop chemistry on the ice with Ferland, but the first workout was promising.

“It's hard to tell when we haven't really played a five-on-five game, but I've played against him last season and he was really good,” said Pettersson.

Ferland, who had 40 points in 71 games with Carolina last season, said he's going to stick to hard-nosed hockey to create offence.

“One thing I'm definitely not going to change is I'm going to come in and I'm just going to be physical,” he said. “The best thing for me is to just stick to my game.”

Ferland said his past battles with the former Canuck teams as a member of the Calgary Flames are history even though his physical play in the 2015 playoffs is often stated as one of the factors leading to an early Canucks exit, their last appearance in the playoffs.

“We totally forget about the past,” said Ferland. “They're my teammates now.”

Veteran Canuck rearguard Chris Tanev was paired with rookie Quinn Hughes on defence at camp while Benn was skating with Troy Stecher, who played for Canada in last spring's world championship.