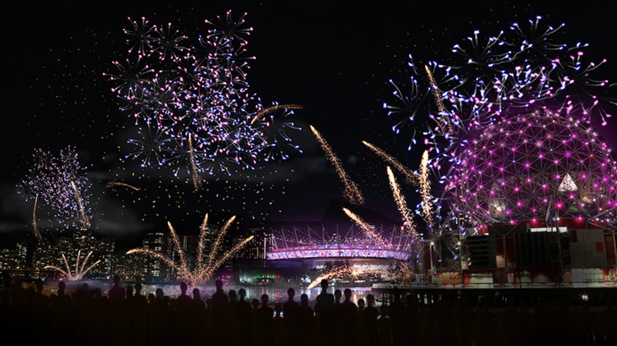 VANCOUVER -- Although New Year’s Eve will still come and go regardless of a pandemic, Vancouver’s epic fireworks event that normally bookends the year has been called off.

This week, the Vancouver New Year’s Eve Celebration Society announced that the 2020 fireworks display in Coal Harbour had been called off due to the public health restrictions in place to help stop the spread of COVID-19.

“The annual fireworks are an exciting and well-loved tradition, and as such, they would undoubtedly have drawn very large crowds to all optimal viewing sites,” said the society’s board chair Dani Pretto in a news statement.

B.C., as well as the rest of Canada, is struggling to keep its case count down and the province has placed a temporary moratorium on events. Due to the current restrictions on public gatherings the society says this year’s typical programming is not possible.

“With the safety of our volunteers, vendors, and guests in mind, we knew that we could not go ahead with this year’s pre-planned fireworks spectacular.”

The fireworks society says that in previous years the event, which is officially titled Concord’s New Year’s Eve, drew upwards of 100,000 guests.

However, just because this year’s event has been called off, it doesn’t mean the event is cancelled for next year.

"As an important part of Vancouver's fulsome events calendar, we look forward to safely welcoming the celebration back in 2021. We know it will be well worth the wait,” said Royce Chwin, President and CEO of Tourism Vancouver in a statement.