Sitting in the front row, middle seat of the CTV News Vancouver control room, senior director Alex Huang glances up from two oversized computer monitors to a wall in front of him filled with dozens of small video screens. A digital clock in the middle shows the precise time: 5:59:30 p.m. The station’s flagship Vancouver newscast, CTV News at Six is about to start.

Directing a live TV show requires a special combination of technical and artistic talent, both of which – for Huang – come naturally. His father, Ted, was one of the station’s original employees, hired as a video camera operator 25 years ago just weeks before the Sept. 22nd, 1997 launch of what was known then as Vancouver Television. 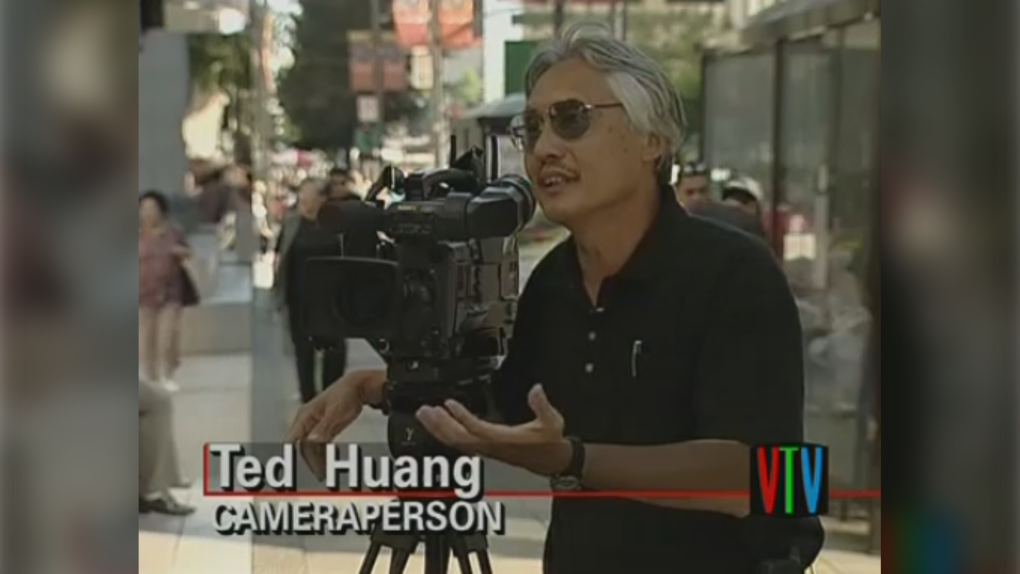 Ted Huang was among the first journalists hired by Vancouver Television, and remained at the station until he retired.

“I remember him being really proud he was employee number five. Vancouver’s TV stations had been stagnant for 20-plus years so it was really exciting for him to be part of something brand new.”

Alex would start a few months later as an intern. “My dad said, ‘What do you want to do after school?’ and I really didn’t know. So I came in and they needed someone to cut up muffins and serve coffee on the morning show, and so that’s what I did."

Vancouver Television, or VTV, would later become the city’s official CTV network affiliate, and a quarter century later, much has changed in how current affairs is covered by the journalists working inside the old Vancouver public library building at the corner of Robson and Burrard. Ted’s death last year at the age of 79 was a heavy blow for the station’s long-term employees and a symbolic passing of the torch at a time of breathtaking and sometimes difficult change for the news industry. Alex is well aware of the legacy he now carries forward. “To be part of something my dad helped create? It’s a personal pride thing.” 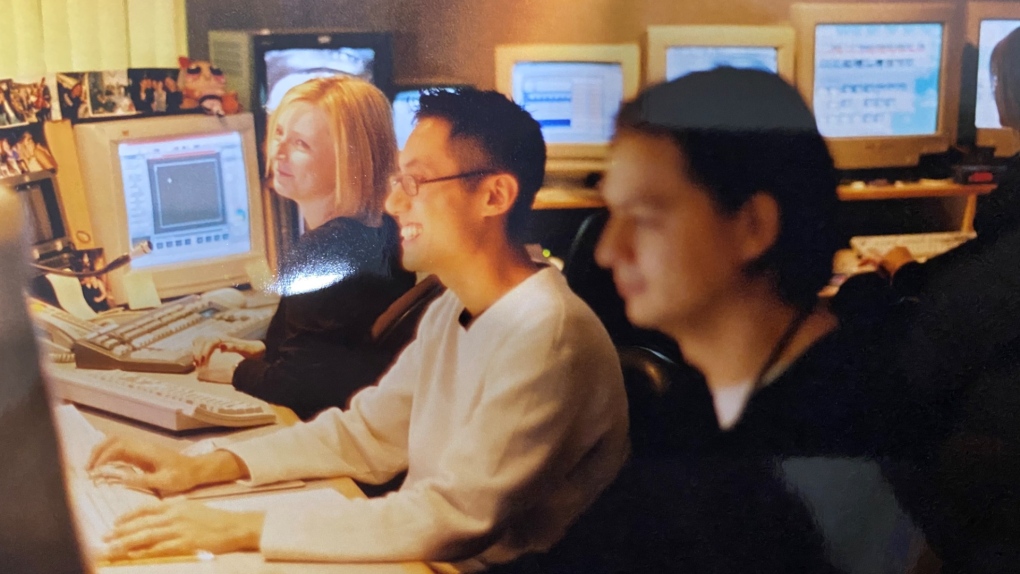 With his family connection to an earlier generation of storytellers and a leadership role in a modern newsroom, Huang understands more than most that the only constant in the industry these days is how nothing stays the same, especially technology.

“When I first started our late show had a crew of 13. Now we have a crew of two.”

As he helps runs a complex array of automatic controls that guide robotic cameras, graphics and digital video feeds, the director’s primary focus is still the journalist who stands in the brightly lit studio a few meters away at the centre of a new set he helped design earlier this year. 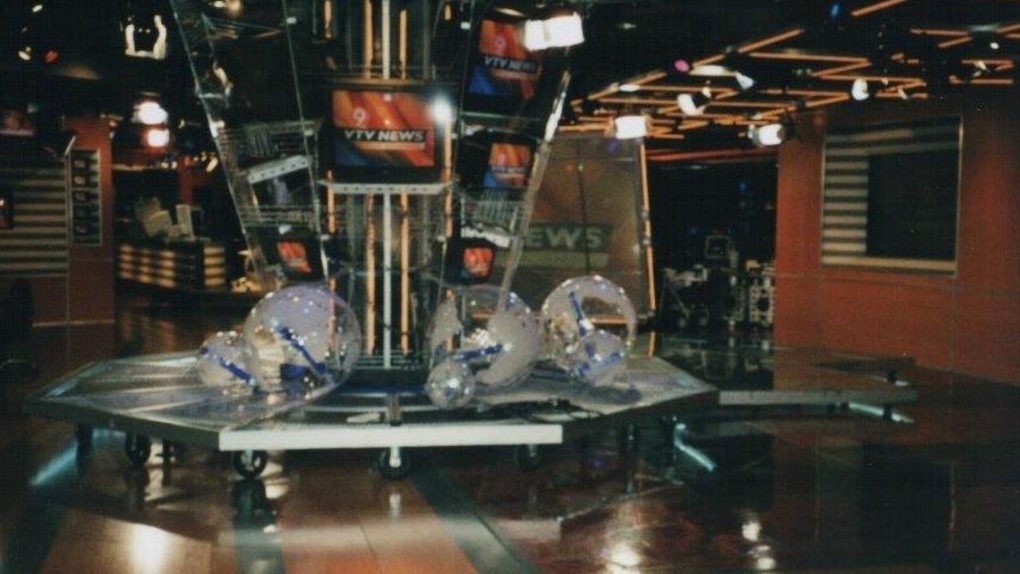 The rotating set of the Vancouver Television newsroom, before the station became a CTV News affiliate.

CTV News at Six anchor Mi-Jung Lee has been with the station for 24 of its 25 years, and as she presents the newscast she helps write and produce, her right hand rests on a small electronic dial that allows her to control the teleprompter. The station’s most prominent figure, like everyone in the newsroom, is now a multi-tasker.

“The industry has changed tremendously,” said Lee, who cut her teeth as an investigative reporter. “I do appreciate some of the changes because I like anchors being more involved in the editorial process, but it can be more difficult for reporters because they are so focused on other tasks. We need to support them.” 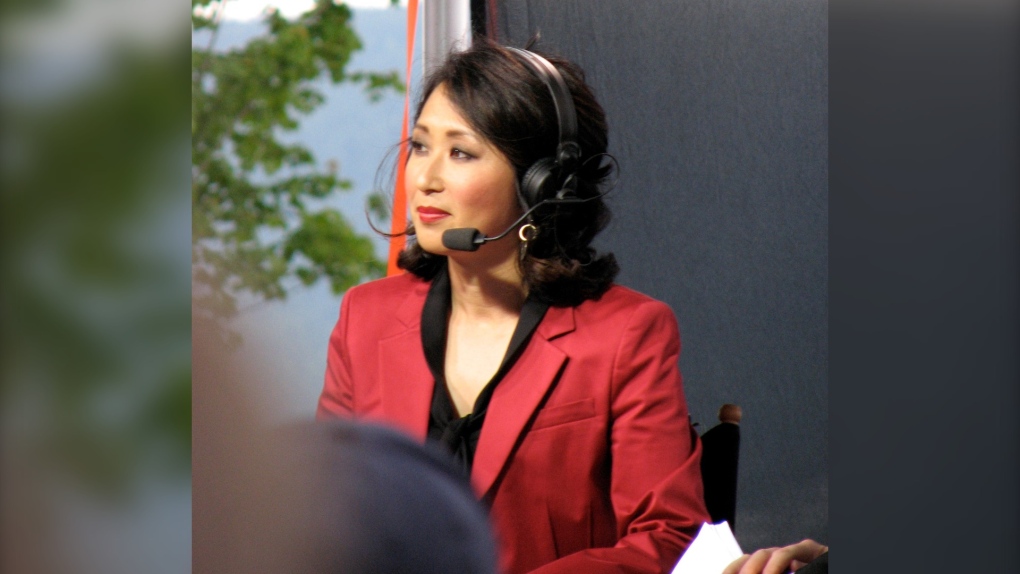 Mi-Jung Lee is seen during a live, on-location broadcast of CTV News at Six.

The quarter century mark for CTV News Vancouver comes after several years of dramatic technological adjustments for the news industry, and painful layoffs. Gathering and transmitting high quality video is easier and faster than ever, but that means journalists are often doing more with fewer resources. Reporters – called multi-skilled journalists now – carry their own video equipment, frequently shooting and editing their own stories, while also writing for the CTV News Vancouver website as the newsroom serves a large online audience.

It’s a lot to juggle. Just ask reporter Penny Daflos as she covers a political convention in Whistler. “People are amazed to see me with a full camera rolling on a press conference while I run outside to ask the minister of health a tough question on my iPhone. I love it but it’s exhausting. The deadlines are still the deadlines and the expectations are the same if not higher because we live in an era where trust in media is eroding.” 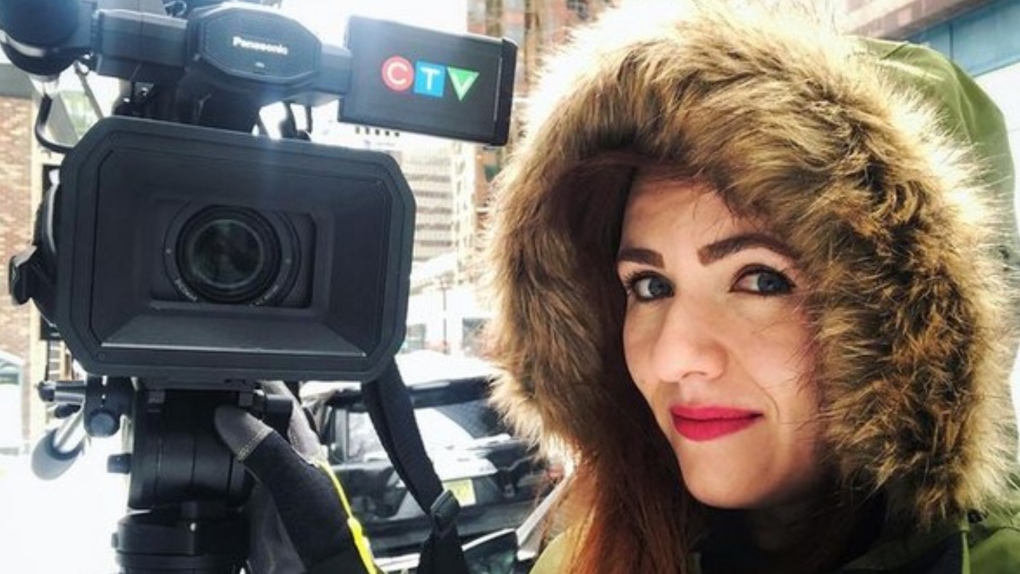 CTV News Vancouver reporter Penny Daflos poses with her video camera. She and other multi-skilled journalists regularly shoot and edit their own stories.

As that trust erodes, animosity is on the rise. Canadian journalists have faced unprecedented threats to their physical safety in recent months from those who seek to silence a free press. Earlier this year, hundreds of anti-mask and vaccine mandate protesters gathered at the front door of CTV News Vancouver, with many calling for the arrests of newsroom employees reporting on the pandemic. A sign held up by a crowd member described the journalists working inside as “corrupt, treasonous vermin.” In February, local journalists covering a protest at the Pacific Highway border crossing were screamed and spit at by anti-mandate activists; another journalist was punched at a rally outside the Vancouver Art Gallery a few weeks earlier.

Daflos feels the danger every shift. “I never know when somebody comes up to talk to me if they are going to say I love your work or threaten me. The more pushback I get the more I realize the importance of what we do.” 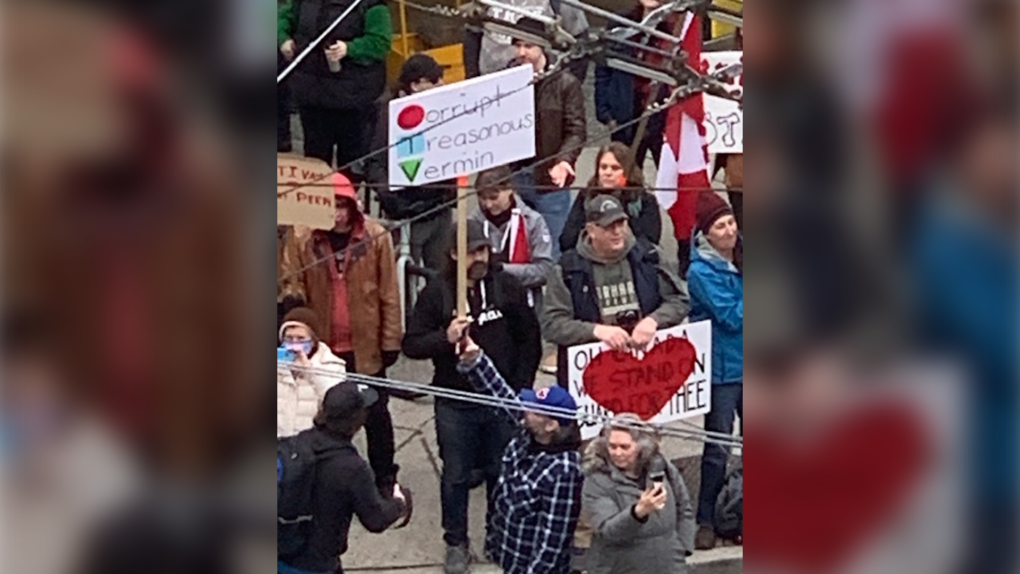 Protesters are seen outside CTV News Vancouver on Feb. 5, 2022.

That part of the mission – the journalism – hasn’t changed. The show on Sept. 22nd, 2022 will be about the nine-thousandth 6 p.m. newscast for a station that still produces 38 hours of local TV news each week. So many stories over so many years. From the uplifting and inspiring – like the outpouring of Canadian pride during the 2010 Winter Olympics – to the deeply troubling, like the recent failure by public health officials to protect B.C. seniors in care from COVID-19. “When the pandemic arrived, everyone was desperate for quality information,” said Lee. “And so they turned to their local news. That reinforced in my mind how important our role still is. We still believe journalism is a pillar of democracy and vital.” 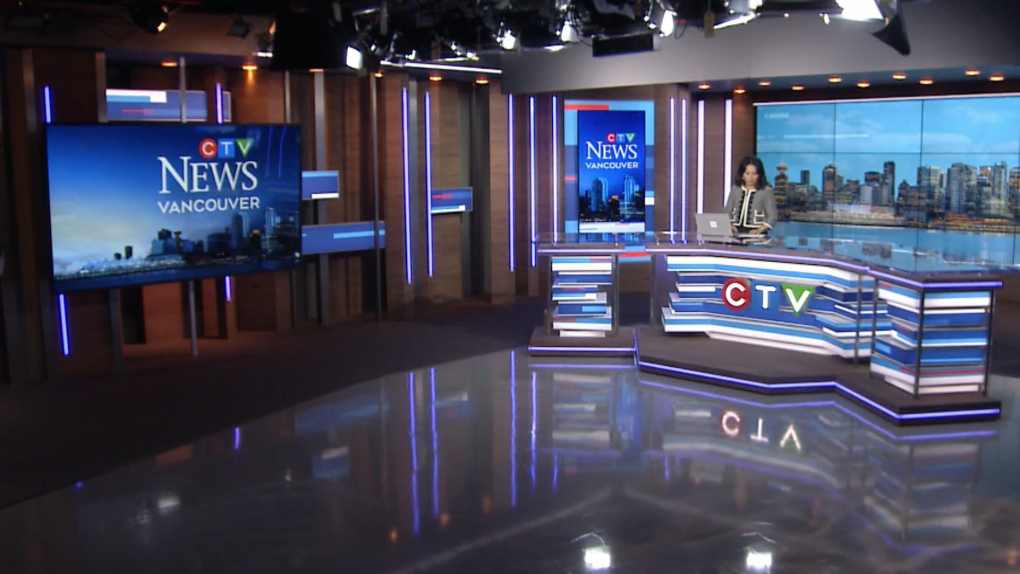 Mi-Jung Lee sits behind the anchor desk on the newly redesigned set of CTV News Vancouver. 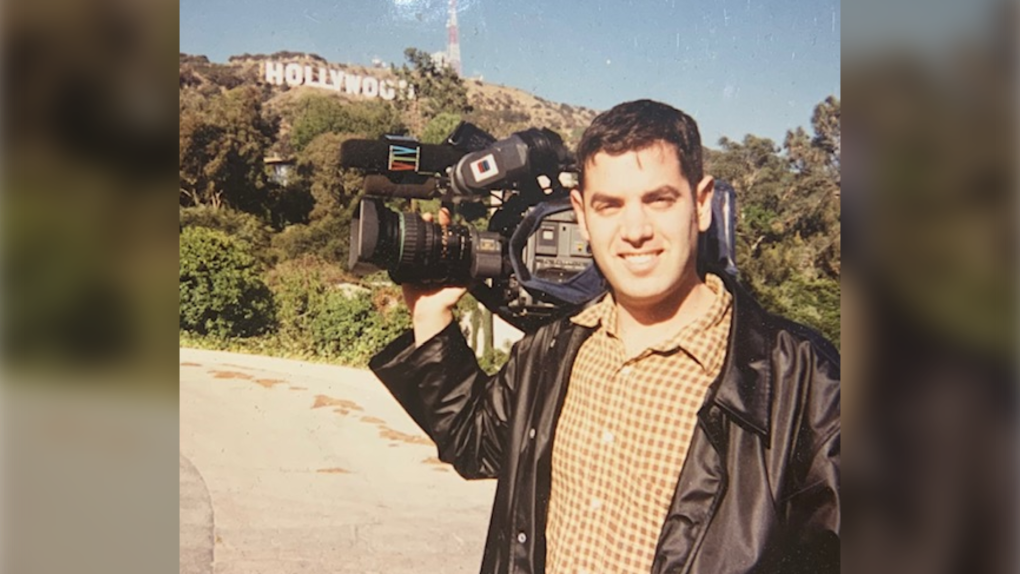 For Alex Huang and the rest of the journalists at CTV News Vancouver who come to work every day and do their best, the station’s 25th birthday is just the beginning: “I’ve been here more than half my life. Yeah, it’s business, it’s a job but it’s also part of who I am.” 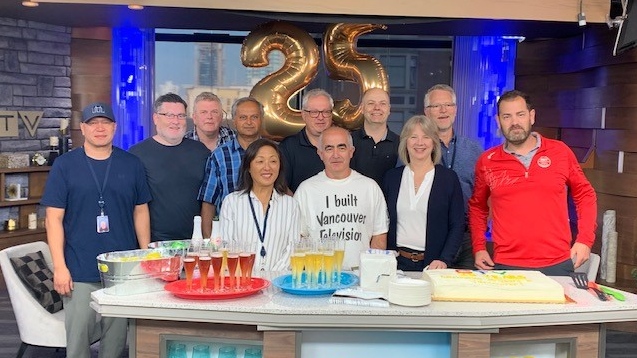