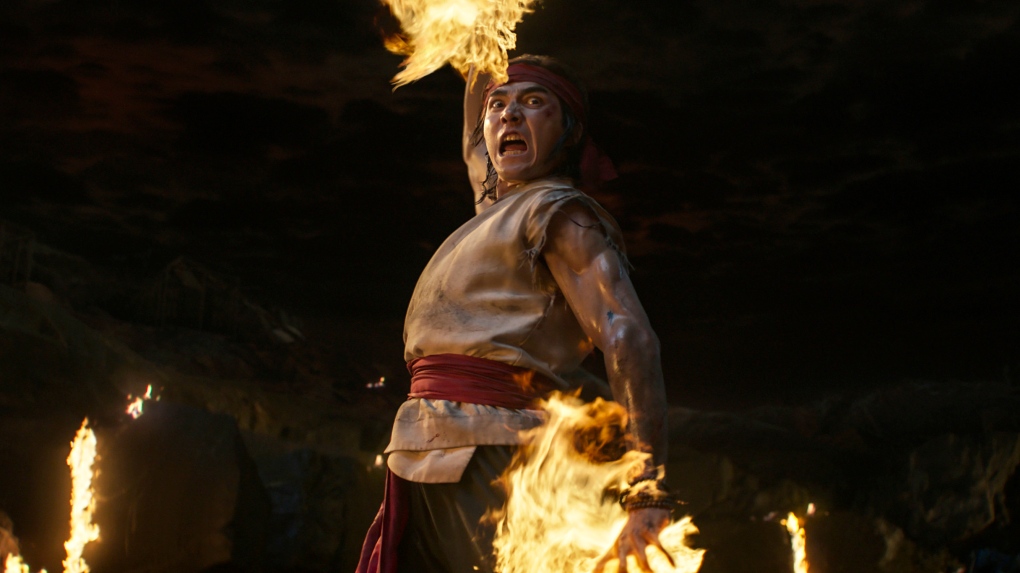 TORONTO -- "Mortal Kombat" may be based on a hit video-game franchise, but Vancouver-raised star Ludi Lin says it serves as an "apt metaphor" for divisions in the world.

The action film about an ancient battle between two realms arrives Friday in available theatres and premium video on demand platforms, providing blockbuster Asian onscreen representation at a time of rising anti-Asian racism.

"If you compare different nations now, compared to 100 years ago, of course each nation is doing better: higher quality of life, more economic success, and everyone's making progress and getting stronger. But I feel like we're getting stronger individually as nations and behind walls just to fight each other," Lin said from Vancouver, where he's shooting the new CW series "Kung Fu."

"And the only result that's going to come from that is the apocalypse, like in 'Mortal Kombat' where this unknown shadowy force is going to invade unless humans realize that we're all champions of humanity and we need to band together so we don't get destroyed eventually."

Cole is a gifted mixed martial arts fighter who has a mysterious dragon birthmark and lineage and joins Liu Kang and other warriors in fighting the Outworld enemies for control of the universe.

Filmmakers tried to be as authentic as possible and show an array of Asian ethnic groups, said Lin, who spoke at a rally denouncing Asian hate in Vancouver last month.

"It's very important to let people know that 'Asian' isn't just one big-box category -- for them to become familiar with different aspects of Asian culture and how meaningful that is, and how interesting, and what that can bring to a culture as diverse as Canada where there's literally Asians from probably hundreds of countries around the world," said Lin, whose other credits include the 2017 "Power Rangers" film.

"People don't really realize that the world is 60 per cent Asian. And 'minority' is defined in a very small and specific context. So in this case, in 'Mortal Kombat,' we get to show Asians from China, from Japan, from all areas of the world."

Lin was a natural fit for "Mortal Kombat," having trained in martial arts since he finished high school. He also previously worked with one of its producers, James Wan, on 2018's "Aquaman."

An accident on the way to his audition for the film may have also inadvertently helped his chances of getting the part.

"On the way there I got rammed off my skateboard by a car, so I was limping, could hardly walk," Lin said, noting he prefers to skateboard around Los Angeles to get around traffic.

"Maybe that helped with the character, because there's a lot of fighting, a lot of getting beaten up and also beating up people. So then (Wan) told me I nailed it."

The actor's affinity for "Mortal Kombat" started as a child, when he looked to video games for companionship while his family moved around to different countries.

Born in Fuzhou, China, he moved to Hong Kong with his family as a toddler and later lived in Vancouver, Australia and the United States before returning to China.

"I think Canada provided the foundation for, first of all, my acting training, and then second of all, my perspective into a whole different world of pop culture," said Lin.

"Also it grounded me in the Canadian dream, which is a multicultural tapestry where everyone fits in. And not just fit in -- everyone belongs. That's still a dream that is going to be a lifelong journey to realize, but it's there as a goal. It's a worthy goal to aim at."

Video games, and "Mortal Kombat" in particular, provided diverse characters he could identify with while living in regions where he didn't speak the language.

"I saw people that looked like me," he said. "Liu Kang and Sub-Zero were favourite characters and they were both Asian."

Lin was further inspired when he saw how Robin Shou, who was also born in China and grew up overseas, portrayed Kang "in such a heroic and charismatic way" in the 1995 "Mortal Kombat" film.

"It really left an indelible mark on my childhood memory," Lin said, noting he even consulted with Shou about how to portray Kang before filming "Mortal Kombat."

"So to be able to do this, it's like an homage to my inner child that, 'This is for you. Time wasn't wasted, and it meant something.' And I hope for people who grew up with it, they feel the same thing."

This report by The Canadian Press was first published April 21, 2021.