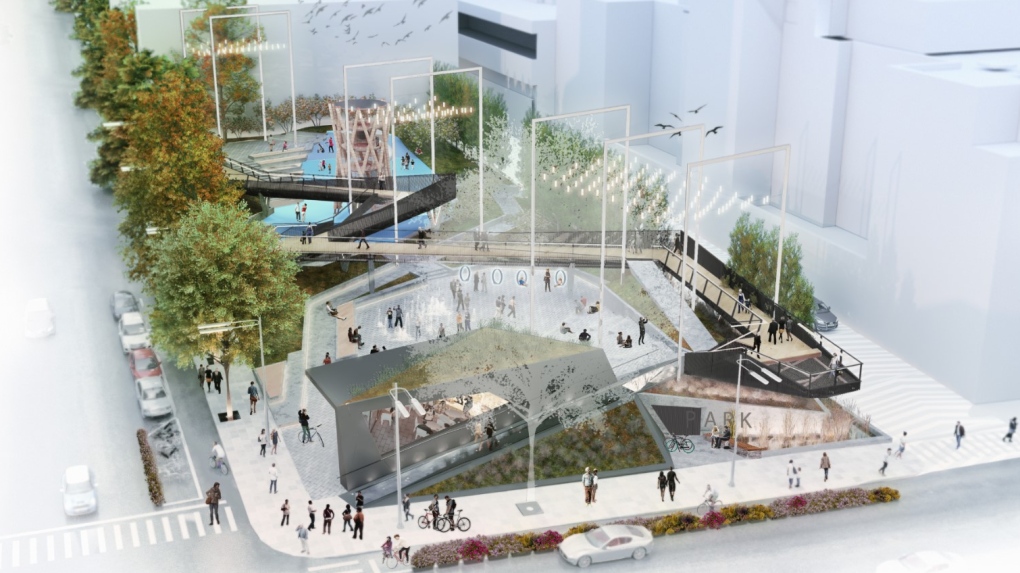 The park is set to be built at Richards and Smithe streets, with ground breaking slated for early 2020. (City of Vancouver image)

VANCOUVER -- A new park is coming to Vancouver's downtown core after a construction contract was unanimously approved by the city's park board Monday night.

The park is set to be built at Richards and Smithe streets, with groundbreaking slated for early 2020. The park is expected to be completed by early 2021.

In a report to the park board, the general manager of parks and recreation says the space "will refine the concept of a downtown urban park" and that "the design of the park responds to its urban setting."

Renderings of the park show an unique design with elevated boardwalks, a covered eating area and an open plaza.

A small café is also promised in the report about the park along with an "engaging" playground, seating terraces and accessible paths.

The Vancouver Park Board first began a design process for the new space in 2015 and in 2016, the concept was approved. Over 2017 and 2018 staff continued to work through the design details before requesting proposals from construction managers this past April.

The park's construction is part of the city's efforts to create more outdoor spaces for the growing high-density community in downtown Vancouver. According to the city, about 30,000 people live and work within a five-minute walk of the planned park.

The estimated cost of the construction contract with Smith Bros. and Wilson is a little more than $13.8 million, with annual maintenance costs estimated at $500,000.

Construction is scheduled to begin on Jan. 6.