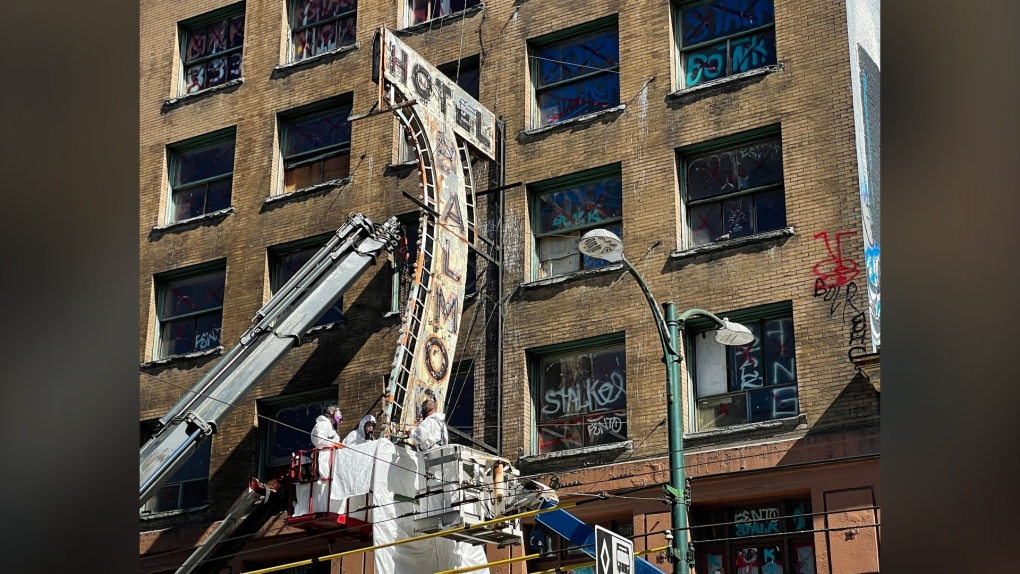 The neon sign on the Balmoral Hotel in Vancouver's Downtown Eastside was removed by city crews on Sunday, June 26, 2022.

The neon sign that hung outside of Vancouver's Balmoral Hotel was removed Sunday but plans to demolish the building itself are still being sorted out, according to the City of Vancouver.

Announcing the plan Friday, a spokesperson for the city said the sign's condition has deteriorated to the point where it poses a "risk of injury to the public."

People were warned to expect minor traffic delays and sidewalk closures along East Hastings Street between Main and Columbia while crews were working.

The building has been empty since 2017, when it was condemned as unsafe for the 150 people who lived there following years of enforcement and legal action by the city due to its derelict conditions and persistent health and safety hazards. It was owned by the Sahota family, landlords infamous for the dangerous state of neglect in their buildings, particularly those housing the most vulnerable tenants.

In 2020, it was expropriated by the city and its demolition was announced earlier this year.

"The decades of underinvestment and mismanagement by the building’s previous owners was irreversible," a statement from the city in February said.

"It became clear that the building has deteriorated to the point that it poses a danger to the public and adjacent buildings."

However, the announcement that the sign is being removed does not contain any further details on the demolition process.

"Staff are continuing to monitor the building’s condition as they plan for the demolition, including hazardous materials abatement and civil site work. Given the age, complexity, and condition of the building, removing the building will take several months to complete," the statement says.

"The city also recognizes that the Balmoral, prior to its closure, was a site of harm and trauma to many and that the demolition of this building will have emotional impact for former residents and their families, friends and community," the statement continues.

Therefore, it says, plans will also include outreach and planning to ensure "respectful, healing and culturally appropriate support and ceremony for community through the actual building demolition and redevelopment process."

The city has promised the site will be redeveloped with affordable housing.

Ontario is extending the deadline for child-care operators to apply for the $10-a-day program and standardizing the process in an attempt to get more providers to sign up.

TikToker puts restaurants, bars to the test over wheelchair accessibility

A Toronto-based disability advocate is using the power of TikTok to raise awareness over the lack of wheelchair accessibility at many restaurants and bars.