When Debbie Weiss moved to the end of Loma Linda Drive in Beverly Hills, Calif. more than a decade ago, she hoped her tranquil piece of paradise would stay that way for good.

“We really wanted quiet. We really wanted privacy. We wanted a view,” Weiss told CTV from her backyard, looking out over the hillside at the Pacific Ocean in the distance.

But all that changed in 2014, Weiss said, when she first learned B.C. developer and Vancouver Canucks’ owner Francesco Aquilini, planned to build right next door.

“When people say, ‘Do you live across from it?’ I surprisingly live across and next to it,” Weiss said, pointing as our camera pans from one end of her yard to the other, “because it’s wrapping around the whole end of the street.”

The early plans for the lots purchased by Aquilini through a trust in 2012 for over $7.2 million, according to Beverly Hills city records, called for a single cliffside home, in excess of 26,000 square feet—a house Weiss called a “monster.” 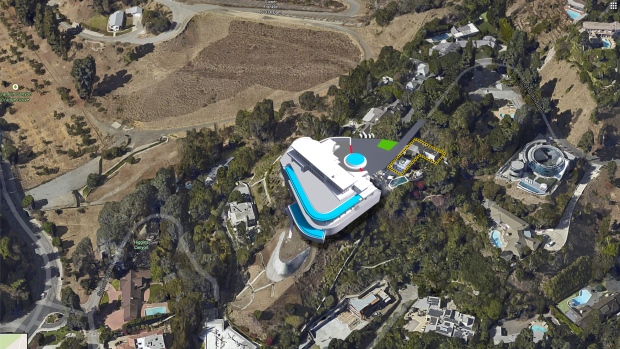 That was 2014. Four years later, Aquilini’s lawyers say the project has gone through at least 10 versions to accommodate neighbours’ concerns and to comply with city requirements. The latest version splits the home into two separate houses. One is over 11,000 square feet including basement and garage space, and the other just over 8,000. 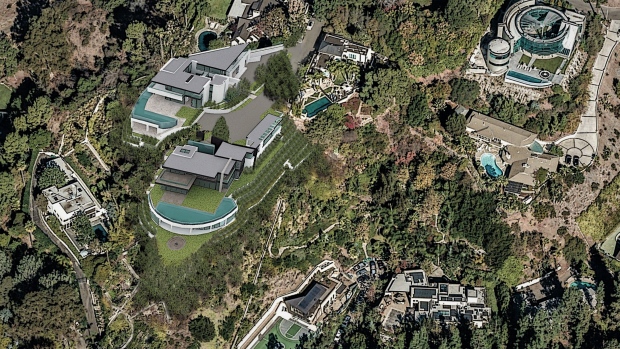 Weiss says her concerns, which include her privacy, the integrity of the hillside, along with construction traffic and exhaust, haven’t changed.

“It’s basically changing the character of our street forever. Once this hillside’s gone, it’s gone forever,” she said, calling the project "wildly out of scale" and "wildly out of character."

Ronald Richards, a neighbour and lawyer who lives one street over in one of America’s wealthiest postal codes and has been closely following the project, has dubbed the latest version the “Starship Enterprise” on the hill. 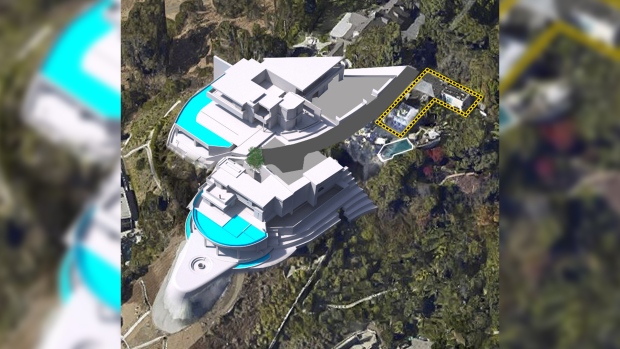 Neighbour Ronald Richards refers to this rendering of the Aquilini property, commissioned by neighbour Debbie Weiss in 2017, as “Starship Enterprise.”

“I just think this is a spec house,” Richards said. “And ultimately, it’s going to be like everything. It’s all about the money… Mr. Aquilini is just some guy in Canada that’s just writing cheques.”

When contacted by CTV News, Aquilini’s lawyers declined to make their client available for an interview, and instead provided written responses to CTV’s questions.

“The two homes are not ‘wildly out of scale’ in any respect,” wrote Tony Oliva, a partner with Allen Matkins, responding to Weiss’ concerns. He added that the homes are “absolutely not ‘changing the character of the street forever.’”

Oliva pointed to a number of homes in the neighbourhood that are “the same size or larger” than the smaller of the two proposed Aquilini properties, and indicated a circular home located on the same street “dispels any notion that the two homes are out of character with the rest of the street.”

Aquilini’s lawyer also revealed that his client has always intended to live in at least one of the homes.

“It is hard to describe this as [his] ‘dream home’ given the animosity and personal attacks he has encountered from the opponents over the past several years,” Oliva wrote.

According to Debbie Weiss, who says she met Aquilini three times, he was always “very pleasant, very charming” but not receptive enough, she says, to addressing her concerns.

Weiss recalled Aquilini’s reaction following a city council meeting in December 2014 after it became clear he would need to make changes to the plans in order to get approval for building permits.

“He kind of turned to me and was like ‘Congratulations,’ like I had bested him in a hockey game,” Weiss said. “Maybe he thought he could just come in and get everything he wanted.”

Aquilini’s lawyers say he and his team have worked through and responded to each and every concern relayed by those who oppose the project.

“Alas, none of our good faith efforts to appease the neighbours have been well-received,” Oliva wrote.

According to city planner Ryan Gohlich, the larger of the two homes may soon be eligible for a building permit. City records also indicate the smaller of the two has a number of outstanding issues under dispute.

When asked what Aquilini could do now to help assuage her concerns and achieve a compromise, Weiss responded: “Be a genuine good neighbour. Really solve it. Don’t just throw crumbs at them.”