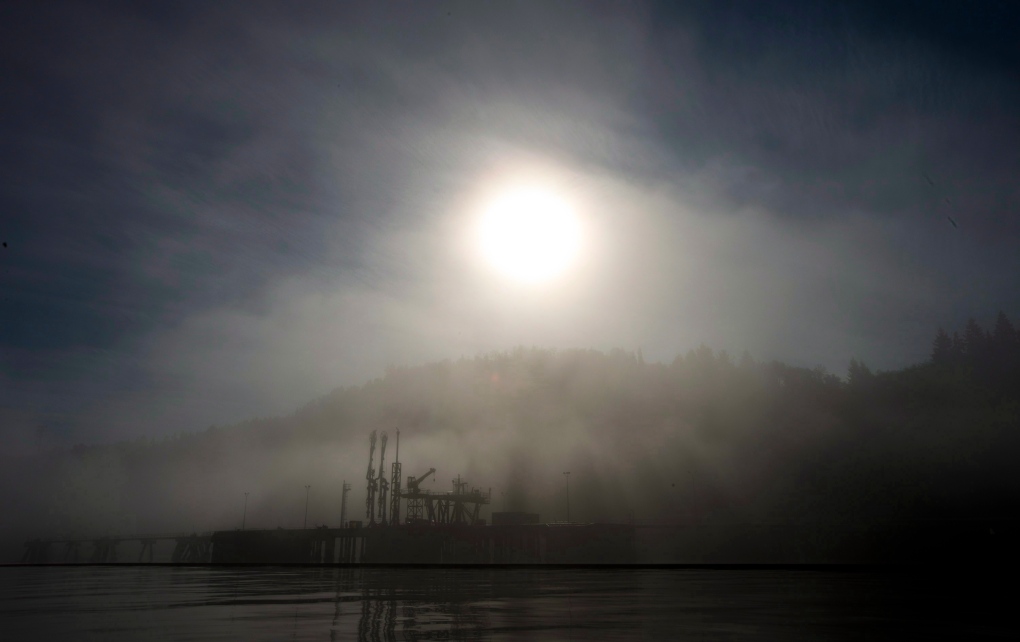 Kinder Morgan oil facility is silhouetted by the sun as it tries to burn through a morning fog in Burrard Inlet in Burnaby, B.C. Wednesday, Oct. 16, 2013. (THE CANADIAN PRESS/Jonathan Hayward)

VANCOUVER -- The City of Burnaby's refusal to co-operate with Kinder Morgan has forced a seven-month delay in a National Energy Board review of the company's proposed expansion of its Trans Mountain pipeline through British Columbia.

The NEB announced Tuesday it has deferred the deadline for the final report to cabinet until Jan. 25, 2016, while Kinder Morgan completes necessary studies.

The agency wants more information about a preferred new route through Burnaby Mountain but, so far, the Metro Vancouver city has been steadfast in its opposition. Burnaby has not allowed engineers and other specialists hired by Trans Mountain onto city property.

"There's a number of different studies that we would need in order to assess the application," said Sarah Kiley, the board's communications officer. "What we're looking at is a new route that would go through the mountain."

The company told the board that the route through the mountain, which is home to Simon Fraser University and a vast park, is preferable because of the lower construction cost.

No one from Trans Mountain responded to a request for comment but the company told the board that it has attempted for more than a year to work with Burnaby to collect the required information.

"Despite these extensive efforts, the City of Burnaby has refused to meet with Trans Mountain on these matters and has stated that it will not provide Trans Mountain with access or permits," the company said in documents filed with the board.

If Burnaby continues to be unco-operative, Trans Mountain said it will apply to the regulatory board for an order granting access.

"Trans Mountain has indicated that it does require access to City of Burnaby land," Kiley said. "If the city refuses access, Trans Mountain can request an order from the National Energy Board to gain access to those lands."

The company reiterated that its preference is to work collaboratively.

Burnaby council is officially opposed to the $5.4-billion expansion that would almost triple the current pipeline's capacity, from 300,000 barrels a day to almost 900,000 barrels.

Burnaby Mayor Derek Corrigan was not available for comment Tuesday, but in documents filed to the board, the city said that "the 'engagement' that Trans Mountain is requesting appears in some cases to constitute support or pre-approval by Burnaby."

In other cases it's akin to city staff helping the company to meet its obligations to the National Energy Board, it said.

It appears unlikely Burnaby will offer its co-operation without an order from the regulator.

"Burnaby takes the position that now the hearing process is underway for the project, communications with Trans Mountain should take place transparently on the hearing record," the city wrote to the board earlier this month.

"Burnaby is open to engagement with Trans Mountain through the NEB process ... ."

Trans Mountain now has until Dec. 1 to submit the required studies to the board. Interveners will then have until Feb. 3 to review and respond to that information.

Oral hearings expected to begin next January will now begin in July 2015. The rest of the assessment will continue as planned and hearings to gather aboriginal oral evidence are expected to go begin as scheduled at the end of August.

Under the original schedule, the board's report was due July 2, 2015.

Kennedy Stewart, the New Democrat MP for Burnaby-Douglas, notes the new deadline for a final decision is after the next federal election in October 2015.

"Up until this point the NEB has allowed Kinder Morgan to play fast and loose with this process," Stewart said in a news release. "My constituents have known for months the company had at least three pipeline routes in play through Burnaby and it looked like the NEB was going to let them get away with not specifying whose homes and properties would be affected."