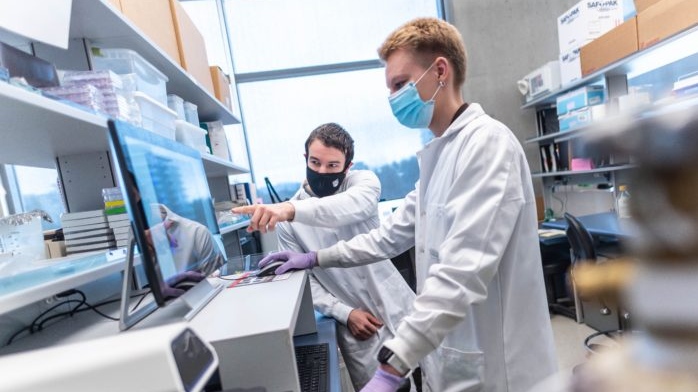 Connor Thompson, left, seen with researcher Annika Schulz, is co-author of a study on the use of a nasal spray for preventing and treating COVID-19 infection. (Credit: UBC/Paul Joseph)

A nasal spray being developed by a team of scientists shows promise in preventing and treating COVID-19 infection, even as new variants of concern continue to emerge.

Dr. Andrea Olmstead, a research associate with UBC’s department of microbiology and immunology, says the drug is different from the anti-virals currently available like Paxlovid and Remdesivir. While those drugs stop the spread of the virus, this one is meant to stop infection before it begins.

“It targets a human protein that the virus needs in order to get into our cells. I kind of think of it like a lock, it locks the door to the virus,” Olmstead said.

“It targets something in our nose, and in our lung cells that the virus needs to start the infection going. It would work really well as a preventative to block those doorways, block the virus from getting in and establishing infection.”

Although not yet approved for testing in humans, Olmstead says it is particularly promising because it has shown to be effective against all the variants it was tested on — up to and including the Delta variant.

“Despite the virus changing this compound continued to show efficacy. That's one of the rationales for moving forward is that the virus will continue to change,” she said.

The research is being published as the the BA.2 variant is fuelling a surge of infections in some countries, prompting concern that Canada could see another wave.

While Olmstead says vaccination remains critical, she also says preventative treatments like this one could bolster protection if and when efficacy wanes.

“The idea is, if you knew that you had been exposed, or if you knew you're going into a high risk environment – say you're a health-care worker and there was a new variant that we weren't sure if the vaccine was very protective against – then you could take something before you go to work and limit your chance of developing an infection,” she continued.

The research also suggests the compound can function as a COVID-19 treatment if used within 12 hours of infection. Mice treated with it showed lower levels of infection in their lungs, and did not experience as much virus-related weight loss.

The Conservatives are calling on the federal government to allow the importation and sale of foreign language-labelled versions of the same formulations of over-the-counter paediatric pain medication, in response to an ongoing nationwide shortage.

Tom Mulcair: What Legault's win might mean for the future of Canada

François Legault may have changed his separatist strategy but he hasn’t changed his stripes, former NDP leader Tom Mulcair says in an exclusive column on CTVNews.ca.

State of emergency declared in northern N.S., thousands still without power on P.E.I.

More than 16,000 customers in Nova Scotia and Prince Edward Island are still without electricity 12 days after post-tropical storm Fiona hit the Maritimes on Sept. 23. The ongoing outages and restoration efforts have prompted the Nova Scotia government to declare a state of emergency in several counties in northern Nova Scotia.