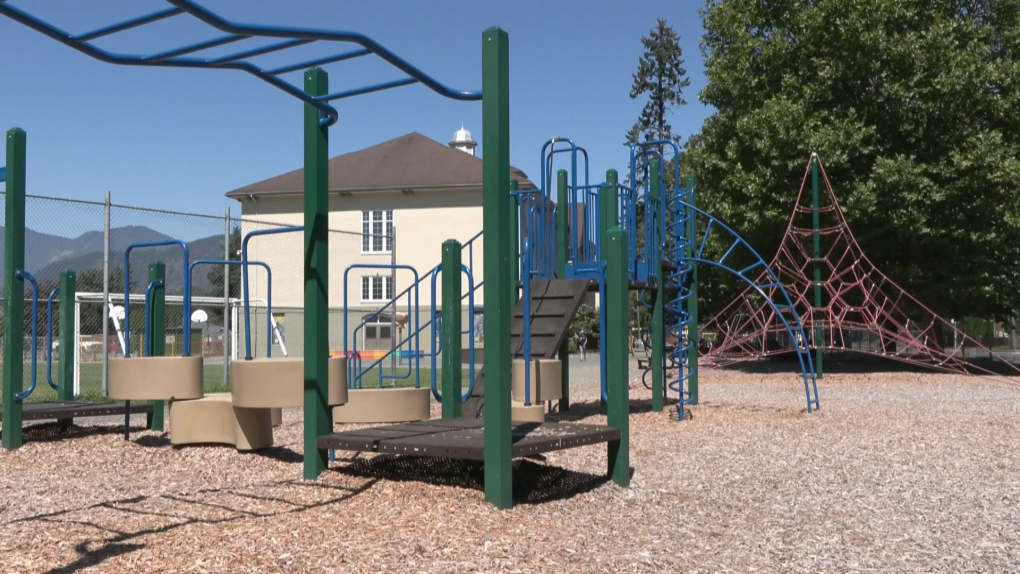 The playground at Chilliwack's Central Elementary school on Aug. 8, 2022, three days after a mystery irritant caused children's eyes and skin to burn.

A mom in Chilliwack, B.C., says she was terrified after her children were exposed to an unknown irritant at a local playground that caused their skin and eyes to burn.

Deanna Hews says her three kids came running into her store, which is close to where they were playing at Central Elementary School on Friday, in obvious distress with red eyes and itchy skin.

"As a mom it's terrifying to have your kids come running into your store screaming," she said in a video posted online.

She immediately shuttered her store, called the police and took her kids to the hospital, posting a warning on Facebook to other local parents.

"Please do NOT go to the park at central elementary my children have burning eyes face mouth and elbows. Do NOT go there," it read.

The Chilliwack RCMP have confirmed they were called to the playground for a "suspicious occurrence" but could not find "any visible or obvious source of irritant," a spokesperson wrote in an email to CTV News.

The area was blocked off and the equipment was cleaned by custodial staff, Mounties added.

Hews says she is thankful for the swift response from the police and the school district and that her children's symptoms resolved with time and an antihistamine.

"They were so red in the face. It was really hard to see my kids like that it like that," she said in a video posted to Facebook the day after the incident.

"We are OK. A little traumatized. As a mom, when your baby's hurt you hurt so – just very terrifying … I just feel so terrible that this kind of thing happens. It's just so unfair to our children. But I'm really thankful for everybody who's helping us to get this situation under control."

She is still wondering what exactly her kids were exposed to, saying the doctor who treated them couldn’t say for sure.

Anyone with information about the incident is urged to call the Chilliwack RCMP at 604-792-4611.

Earlier this year, police in another Metro Vancouver city were also called to investigate after children reported minor injuries due to an irritant on a playground. In that case, the Port Moody Police Department said the "suspicious substance" -- potentially hot sauce –had been deliberately smeared on the equipment.