Surrey RCMP are investigating after a bizarre case of trespassing in Newton that resulted in the wrong tree being chopped down.

It happened Wednesday morning at a rental home near 130th Street and 63A Avenue.

Karmen Bennett had just returned home from dropping her kids off from school.

"I had a knock at the door from a man saying he was here to cut some branches down in our tree," she told CTV News.

She said she was confused because her landlord hadn’t mentioned it, so she immediately got on the phone.

"She said, 'That’s very weird, can you go talk to them? I didn’t arrange anything.'"

But by the time she got back outside, work was well under way. She tried to ask the two workers for more information, but they were adamant they were at the right house.

The mother of two says the situation escalated quickly, with the man becoming increasingly rude.

"I was home and it was just me. (I felt) taken advantage of, in that sense."

She tried to take a photo of the men and their grey pickup truck, but they took off.

“I guess they realized they had the wrong house, “said landlord Amrit Mansahia.

The workers cut the tree down to the stump, but didn’t begin any of the cleanup. 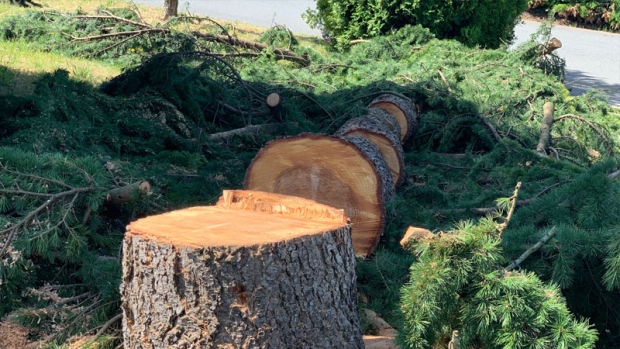 "It almost made me want to cry seeing this tree butchered," said Mansahia, “One of the kids could have run out. They could have been seriously injured -- it’s a massive tree.”

With no leads, she decided to drive to homes with similar addresses to see if the workers had moved on to another property. Her search turned up dry.

"They didn’t have proper signage on their truck when they came. They didn’t provide any paperwork."

Mansahia said it was a struggle to get help afterward, with both the RCMP and the City of Surrey claiming the incident fell in the other’s jurisdiction. RCMP have confirmed they are now investigating the incident as mischief.

The city sent an arborist to investigate Friday.

It was discovered the butchered tree was a Cedrus Deodara, a rare cedar native to South Asia. It was more than 40 years old and was in healthy condition.

"People do really need to understand that in order to, not just to cut down a tree, but even pruning on specific trees, they may require a permit," Marosevich explained.

Mansahia is now on the hook for the cleanup, which is expected to cost thousands of dollars.

“It’s important to also understand that removing a fallen tree can also be an offense,” said Marosevich.

The landlord will have to hire a certified arborist to finish the job, to avoid fines of up $10,000. She’s asking anyone who may have seen the mystery workers, or their truck, to call RCMP.

The City of Surrey says it investigated 100 tree-cutting offenses last year. Only 30 of those cases had enough evidence for officials to issue a ticket.