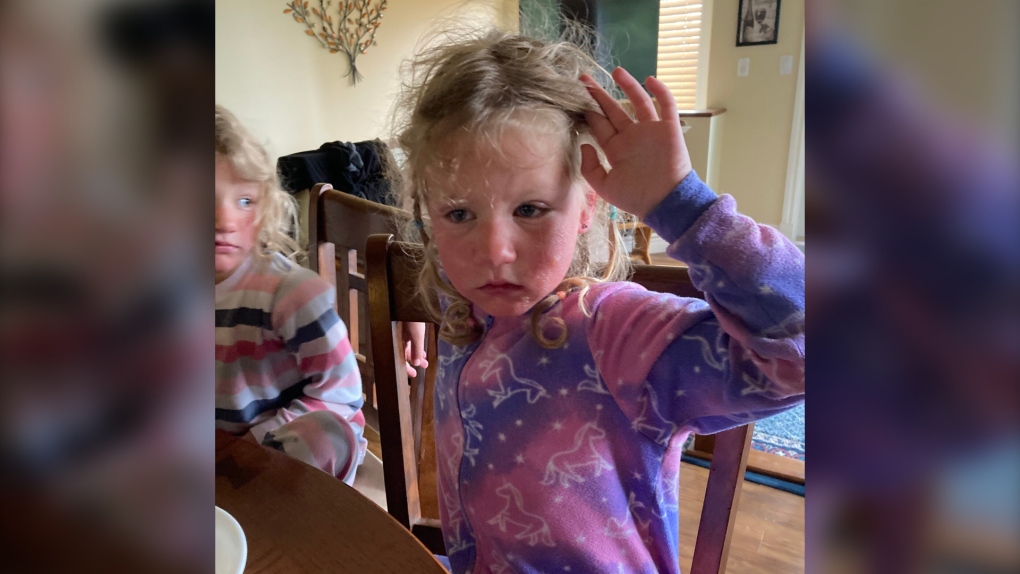 Two children suffering from the effects of Myrtle spurge contact are seen in an image from the Invasive Species Council of B.C.

The Invasive Species Council of B.C. is asking the public to report sightings of a "highly toxic" plant that can leave people's skin blistered and burned – something one family recently learned the hard way.

Okanagan residents Doug and Sandra Nimmo were hosting their granddaughters over the July long weekend when the children came into contact with Myrtle spurge, a garden perennial that carries a nasty sap capable of causing blindness in severe cases.

Fortunately, the children, who had been picking plants for a bouquet, only woke up the next morning with red and irritated skin, according to the Invasive Species Council, which shared the family's story.

"They got out of bed, and I was shocked to see their faces puffed up with blisters," Sandra Nimmo told the ISCBC, adding that the children weren’t seriously hurt.

“They laughed when they saw their faces in the mirror, and it only took about a week and a half to clear their skin.”

Myrtle spurge, or euphorbia myrsinites, is described as an extremely aggressive invasive species from the Mediterranean that can quickly take over gardens and other green spaces.

If ingested, the plant can cause nausea, vomiting and diarrhea. To cause blindness, the sap has to come into contact with someone's eyes.

The Invasive Species Council said Myrtle spurge is recognizable by its small, yellow flowers and light blue-green leaves, which are sharp and spiral closely around the stem. The plant grows 10 to 15 cm tall and forms a "low, spreading mound," according to the ISCBC. 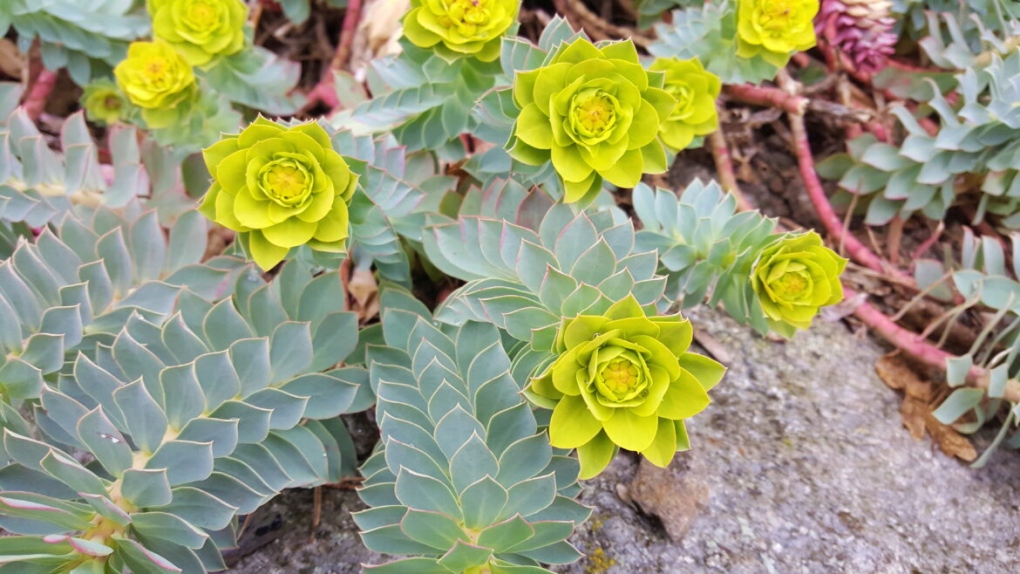 Myrtle spurge is seen in an image from the Invasive Species Council of B.C.

The plants are mostly found in the Okanagan, where they thrive in its warm climate and dry soil. They’re also sometimes found for sale at garden centres, despite being provincially regulated.

"With our PlantWise program, we are working with growers, retailers, and consumers to spread the word about which invasive species shouldn’t be sold and grown in B.C.," ISCBC's Allison McCabe said in a statement. "Great alternatives to Myrtle spurge include Lanceleaf Stonecrop (sedum lanceolatum), a beautiful native succulent that thrives in hot, dry conditions.”

The Invasive Species Council of B.C. said people can find more alternatives through its Grow Me Instead website. Anyone who has been in contact with Myrtle spurge or another invasive species is urged to report it online.

Two Mounties on trial in the death of an Alberta man have been found not guilty of manslaughter and aggravated assault.

A security breach linked to Ontario’s COVID-19 vaccine portal exposed the personal information of thousands of people in the province.

An oil spill in a creek in northeastern Kansas this week is the largest for an onshore crude pipeline in more than nine years and by far the biggest in the history of the Keystone pipeline, according to federal data.

Quebec's legislature has passed a law putting an end to the requirement that members swear an oath to the King. The Coalition Avenir Quebec government had tabled a bill on Tuesday making the oath to the monarch optional after three members of the opposition Parti Quebecois refused to swear the oath and were barred from sitting.

The head of NATO expressed worry that the fighting in Ukraine could spin out of control and become a war between Russia and NATO, according to an interview released Friday.

The Ikea monkey was spotted 10 years ago. This is where he is now

A monkey cloaked in a tiny shearling coat was found roaming an Ikea in Toronto 10 years ago to date.

Brittney Griner back home in U.S. after Russian prisoner swap

Brittney Griner returned to the United States early Friday, nearly 10 months after the basketball star's detention in Russia made her the most high-profile American jailed abroad and set off a political firestorm.

No decision on landfill search, Winnipeg Police Board considering outside help

Decisions on next steps in a potential search for the remains of two Indigenous women believed to be at a landfill outside Winnipeg are being worked through with the option of bringing in outside help, the city's police board said Friday.