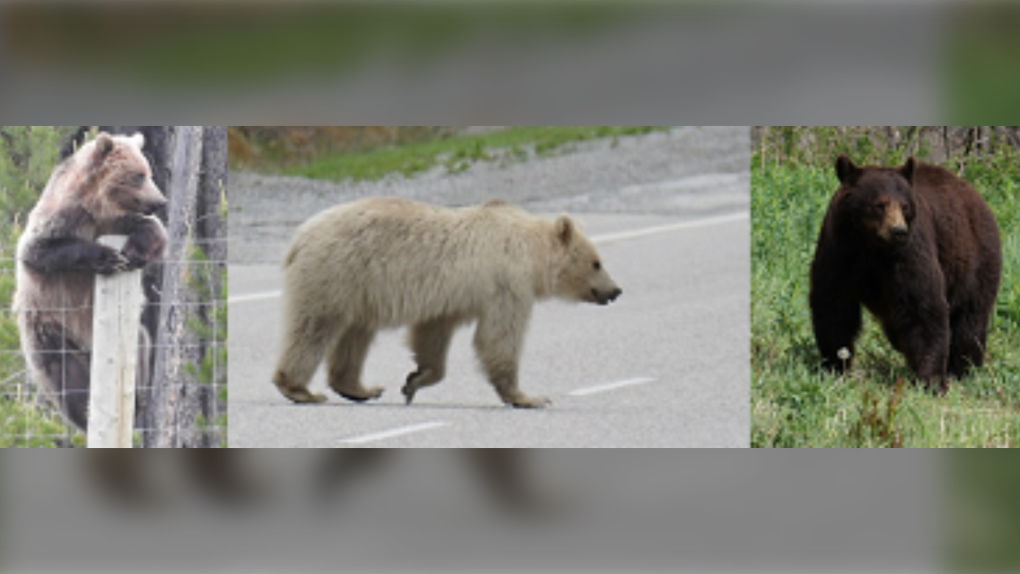 Bears are seen in B.C.'s Yoho National Park in this series of photos released by the BC Highway Patrol. (BCHP)

In a news release Thursday, the BCHP said the federal parks agency contacted it in early June "after a number of collisions with bears on Highway 1 east of Field B.C." in Yoho National Park.

A spokesperson for Parks Canada told CTV News by email that three bears were struck and killed in the same stretch of highway over a six-day span from June 7 to 13.

The first collision happened during the early morning hours of June 7 near the Lake O'Hara parking lot, according to Parks Canada. The bear – a young female grizzly – was believed to be about five years old and was the sibling of Yoho National Park's well-known white grizzly.

After the initial crash, Parks Canada implemented a speed limit reduction to 70 kilometres per hour between West Louise Lodge and the bottom of Field Hill. The agency also established a no-stopping zone and stepped up enforcement in the area.

The second collision happened on June 11, killing an adult male grizzly that had been trying to breed with the female bear killed earlier that week.

The second crash led officials to reduce the speed limit to 50 km/h, according to Parks Canada.

As a result of the string of crashes, according to the BCHP release, officers from both agencies began an "enforcement and education campaign."

"The section of highway is popular with both black bears and grizzly bears at this time of year due to an abundance of high-value food sources found along the road," police said in their release.

"Unfortunately, this puts the bears at risk of contact with motor vehicles and often results in injury or death to the bears."

During the week of June 13, BCHP officers and Parks Canada wardens issued 80 speeding tickets and impounded four vehicles. They also ticketed one person for flying a drone in a national park.

"Parks Canada stresses the importance of observing the reduced speed limits, and to drive with caution in the early morning and evening hours," the agency said. "Do not stop if you see wildlife on the roadside, particularly along the Trans-Canada Highway. Please report all wildlife sightings on the roads or any wildlife incidents to Parks Canada dispatch at 403-762-1470."

Pope Francis is declaring that there is not enough evidence to open a canonical investigation for sexual assault against Quebec Cardinal Marc Ouellet. The pontiff made the statement Thursday through the director of the Holy See press office.

A top executive at former U.S. President Donald Trump's family business pleaded guilty Thursday to evading taxes in a deal that could potentially make him a star witness against the company at a trial this fall.

Turkey's president and the UN chief met with Ukrainian President Volodymr Zelenskyy on Thursday in a high-stakes bid to ratchet down a war raging for nearly six months, boost desperately needed grain exports and secure the safety of Europe's biggest nuclear power plant.

Local authorities in British Columbia's Okanagan region say all evacuation orders around the so-called Keremeos Creek wildfire near Penticton have been rescinded.