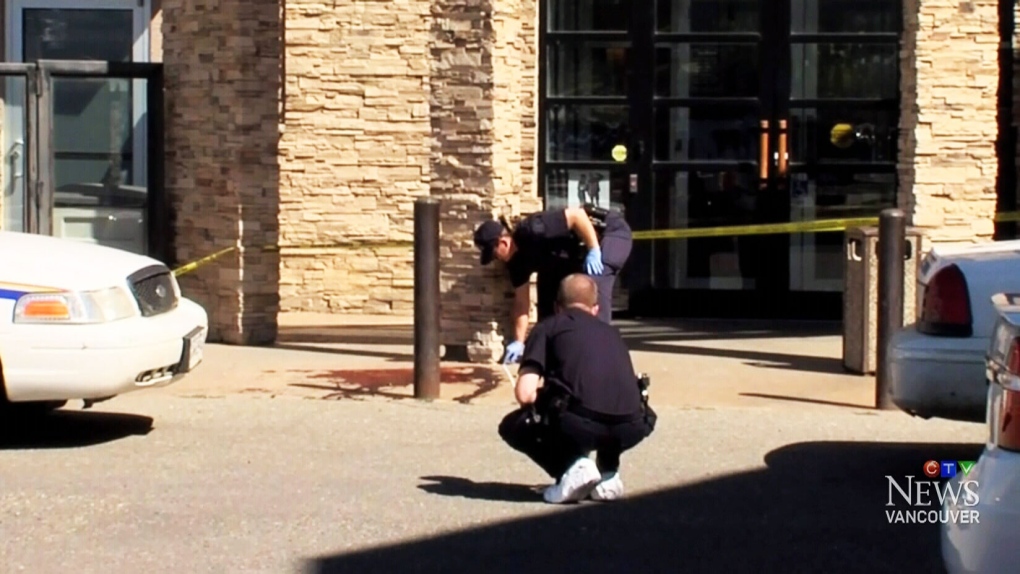 Officers gather evidence at the scene of a fatal RCMP-involved shooting in Dawson Creek on July 16, 2015. (CTV)

The RCMP officer who fatally shot a man associated with the hacker group Anonymous last year will not be facing charges, B.C.'s police watchdog announced Wednesday.

The victim, 48-year-old James Daniel McIntyre, was killed outside a public hearing for the controversial Site C hydroelectric dam in Dawson Creek on July 16, 2015.

Sixteen months later, the Independent Investigations Office said it has reviewed all of the available evidence, including medical evidence, forensic evidence, and statements from witnesses and officers, and decided not to submit a report on the shooting to Crown counsel for the consideration of charges.

"The interim Chief Civilian Director of the IIIO does not consider that any police office may have committed an offence under any enactment," the agency said in a statement.

Officers were called to the Site C hearing with reports of a disturbance and found McIntrye wearing a mask of Guy Fawkes, a member of Britain's Gunpowder Plot whose likeness has become a symbol for several anti-establishment groups.

The IIO said it "would later become evident" that McIntyre was not the subject of the original disturbance complaint.

Mounties said the protester was holding a closed switchblade in his palm, however, and didn’t comply when officers at the scene asked him to show them his hand.

According to the IIO, several witnesses described McIntyre opening the knife and moving toward the officers, with civilians from the scene describing his behaviour as "lunging towards" and "jabbing at" police.

Their investigation determined McIntyre was pepper-sprayed and then, when that did not have an apparent effect on him, shot once. The IIO was notified hours after the shooting, and immediately commenced and investigation.

McIntyre's death triggered a response from the amorphous Anonymous hacktivist group, which claimed responsibility for shutting down the RCMP's national website days later, an act it dedicated to a fallen "comrade." The Dawson Creek detachment website also went offline the same day.