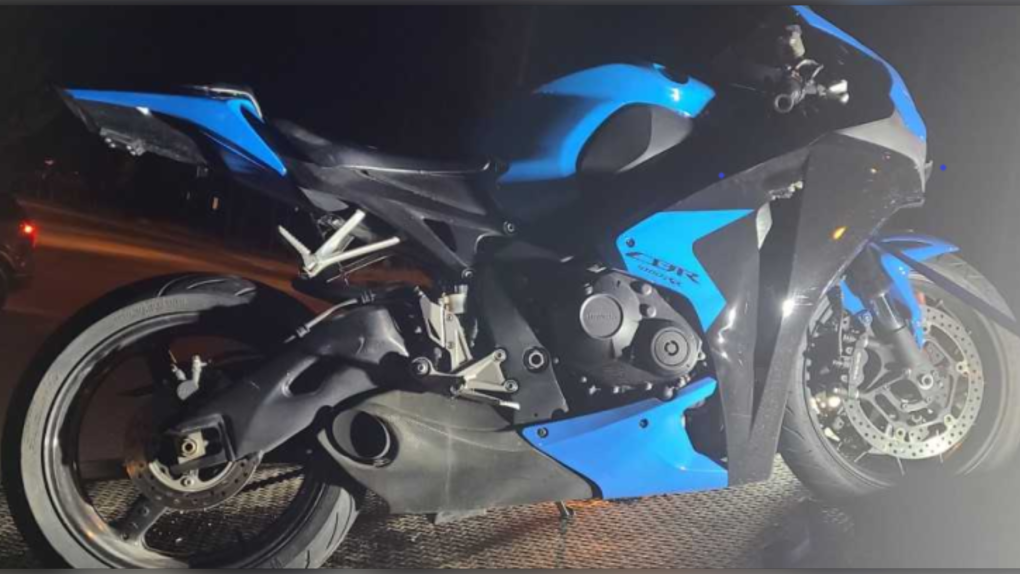 A motorcyclist who sped away from police at more than twice the speed limit has received several tickets and had his vehicle impounded, Kelowna RCMP say. (Kelowna RCMP)

A motorcyclist who sped away from police at more than twice the speed limit has received several tickets and had his vehicle impounded, Kelowna RCMP say.

The incident that led to the tickets happened on Tuesday, Sept. 20, shortly after 8 p.m. according to a news release from Mounties.

A West Kelowna officer was patrolling near Shannon Lake and Tallus Ridge roads when he saw a black-and-blue Honda CBR 1000 that was reported to have expired insurance as of Sept. 14, police said.

The officer attempted to conduct a traffic stop, but the motorcyclist "looked back and accelerated," speeding past other vehicles in the residential area at more than 100 kilometres per hour, according to police. The posted speed limit is 50 km/h.

Rather than pursue the motorcycle, the officer disengaged "because of concerns for the safety of the rider and the general public," police said.

He instead went to the registered owner's address in West Kelowna, where he encountered the motorcycle owner's wife, who said she was on her way to pick up her husband, according to Mounties.

The motorcycle itself was found parked on Stone Grove Crescent and the rider was seen running away, police said, adding that the officer eventually met with the owner, who admitted to fleeing.

He received tickets for excessive speed, no insurance and failing to stop for police, and the motorcycle was impounded for seven days.

"Riding a motorcycle or any other motor vehicle at high speeds in a residential neighbourhood is not only dangerous to the operator, but to the public," said Const. Mike Della-Paolera, in the release.

"If caught, you will lose your vehicle and certainly be fined. It’s not worth the risk."