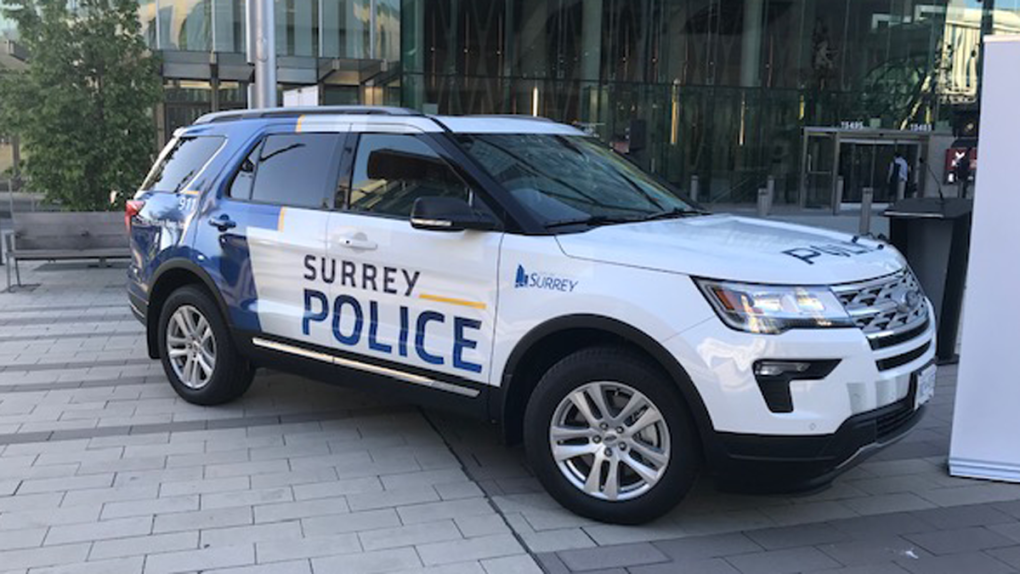 An SUV marked 'Surrey Police' is seen outside the Civic Hotel.

VANCOUVER -- One of British Columbia's largest cities is in a unique position to redefine policing at a time when anti-racism advocates are calling for an overhaul.

Surrey was in the midst of replacing the largest RCMP detachment in Canada with a municipal force when the police killing of George Floyd in Minneapolis led to Black Lives Matter protests around the world.

But with Mayor Doug McCallum envisioning an increase in police presence rather than defunding the force, Surrey's new model appears unlikely to fulfil protesters' vision for a fundamental shift in the mandate of the police.

“It's going to be a new, modern, proactive police service,” McCallum said in a recent interview, adding that he'd like to see officers so involved in the community that they pre-empt 911 calls.

“It's not like the old model of policing that is all reactive - somebody phones 911, they rush to see what the problem is. That's all reactive. We want to get out in front of that so that they don't have to make that 911 call.”

McCallum, who also chairs the police board, said it will be a priority to hire officers who reflect the city's diversity.

The wheels were set in motion for the new police service in 2018, when Surrey's new council terminated its contract with the RCMP. Voters filled all but one council seat with Safe Surrey party members, including McCallum, who ran on making the change.

Safe Surrey has pointed to rising crime as justification for the shift while the RCMP has defended its record, saying statistics don't back up that perception.

Since then, the anti-racism movement has prompted deeper questioning in North American communities about what role officers should play in society. Protesters have called for governments to redirect spending from police into community resources like housing and health services.

While the budget for Surrey's municipal force has not been set, it appears to require broad funding, including for positions outside the police force itself.

According to McCallum's vision, front-line officers would be backed by an increase in bylaw officers, school liaison officers and others.

He also expects they will work in teams with social workers, health workers and others when responding to issues like homelessness or mental health emergencies.

“Putting a team together to address it is the most effective way to do it,” he said. “Yes, police have to be part of the team, but they're only a part.”

Mounties in Surrey already work in teams with nurses specializing in mental health through its Car 67 program. Those teams responded to just under 900 of the 7,600 mental-health calls the detachment received last year.

McCallum is only one voice on the nine-member police board and whether his vision comes to fruition remains to be seen. The mayor said the board plans to meet by the end of July and hire a police chief in August.

Chief Harley Chappell of the Semiahmoo First Nation said he applied to join the police board because the municipality has not included his community in plans for the new force, despite the city being home to one of the largest urban Indigenous populations in Canada.

After a long history of poor relations with police, the First Nation has finally developed a good working relationship with the RCMP, said Chappell, who was appointed to the board by the province.

Semiahmoo leaders are in regular contact with the staff sergeant of the RCMP's diversity unit. And an officer dedicated to the First Nation has taken time to develop relationships with its members over many years, he said.

Now that work seems to be at stake. Chappell said he'd like to see those relationships expanded, not scrapped.

Chappell said he wasn't prepared to share his perspective on broader ideas regarding police mandates and funding, but as a former social services worker he believes prevention is often overlooked as a priority.

Harsha Walia, executive director of the BC Civil Liberties Association, said she doesn't have a lot of faith that significant change will happen in Surrey and expects to see a strengthening of the “law and order agenda.”

“I think what we'll end up seeing is this version of community policing dealing with mental health, homelessness, substance use and 'gangs' in Surrey and police kind of emerging as this catch-all solution, rather than the more rigorous social, political and economic transformation that's needed,” she said.

Diversifying the police force is a more superficial response to the systemic racism in law enforcement that puts Black, Indigenous and people of colour at a higher risk of violence and criminalization, Walia said.

And pairing officers with health workers for “wellness checks” won't stop violence from escalating if the officer takes over as soon as a threat is identified, she said.

“I think right now we're in a moment where there's a deep questioning,” she said.

This report by The Canadian Press was first published July 8, 2020