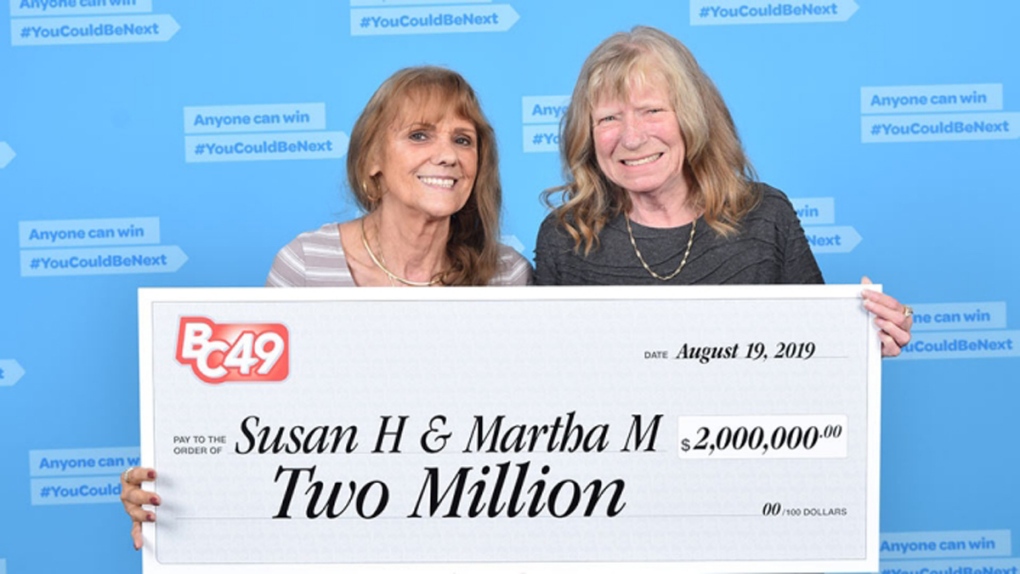 Best friends Susan Hook and Martha McCallum hold their winning cheque in this photo from BCLC.

A pair of friends who've spent more than five decades together are the latest to claim a lotto win.

The British Columbia Lottery Corporation announced Tuesday that the latest BC/49 prize would be split between best friends.

BCLC says the pair have shared a lot, including "all of life's highs and lows." So it's no surprise they decided to share a lottery ticket last week.

And now, they'll be sharing something else.

Susan Hook and Martha McCallum will split the $2 million prize, after matching all six numbers on their ticket from the Aug. 17 draw.

McCallum said she got the good news on a coffee break.

"I thought, 'What do all the zeros mean?' And I went back to work, believe it or not," she said in the BCLC statement.

Both women are widows, and the win came at a time that is usually difficult for them.

"Yesterday was the anniversary of my husband's passing," Hook said.

"And it is quite something to know that we became millionaires on that day. I dread that day every year."

The prize is likely to be life-changing, but the women still plan to live together. They said they plan to fulfil a lifelong dream they've had to travel, and that the prize will make their lives "comfortable, but not flashy."

Another person in B.C. is $60 million richer after winning a Lotto Max jackpot last month. Their identity will be revealed Wednesday.