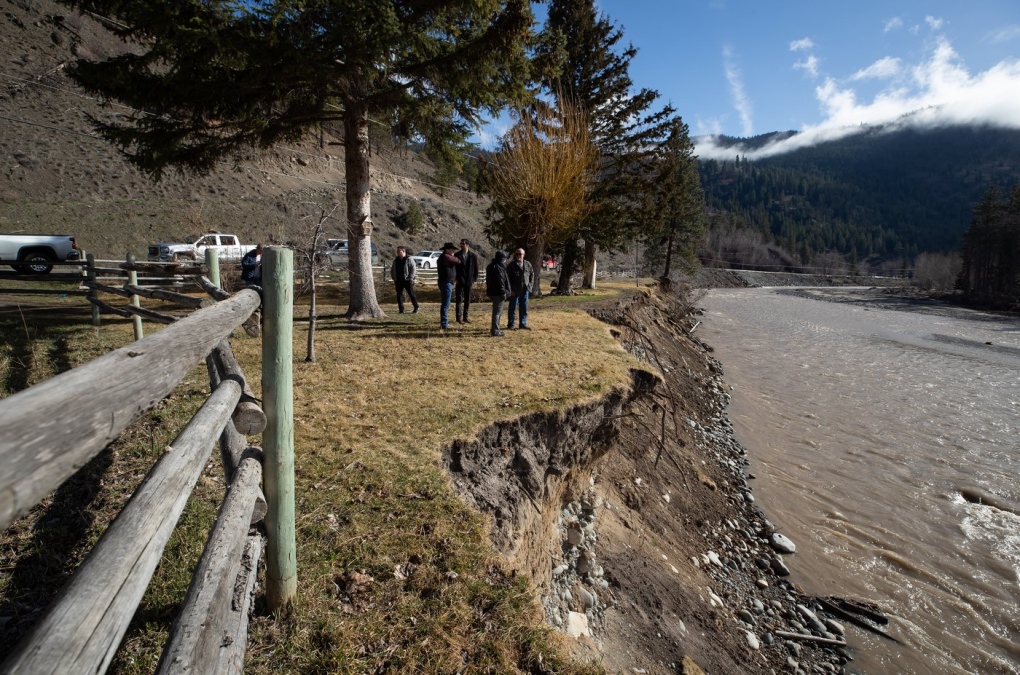 Paulus Velt, far right, whose home was washed away and farm destroyed during the November floods, speaks with Assembly of First Nations National Chief RoseAnne Archibald as he shows her and Shackan Indian Band Chief Arnie Lampreau (Swakum), second left, where his home once stood on his property on the Nicola River, west of Merritt, B.C., on Thursday, March 24, 2022. THE CANADIAN PRESS/Darryl Dyck
Merritt, B.C. -

A survivor of British Columbia's catastrophic floods last year is warning others to check their insurance policies after she said she received a payout of only $30,000 when her home, assessed at $414,000, was destroyed.

Pam Velt, whose house collapsed into the Nicola River last November, said she and her husband, Paulus, believed they were fully insured.

"We thought we were covered," she said. "I just finally have kind of realized that we have no home left. And everything we've worked our butts off for is gone."

The Velts had just begun their retirement on the rural property along Highway 8 west of Merritt, B.C., and were planning to leave it to their son, who also lived with them. They are now billeting in a 12-foot trailer with support from the Canadian Red Cross.

Despite paying extra for overland flood insurance, which covers damage from heavy rainfall and overflowing rivers, Velt said they were shocked at the payout amount and are disputing it.

A copy of the Velts' insurance coverage shows their main policy includes a total $674,050 in property coverage, including $313,500 for their home, and other coverage for additional structures, personal property and loss of use. Under additional and optional coverage, the overland flood insurance amount is listed as $30,000.

Their insurer, Wawanesa Mutual Insurance Company, said in the interests of its policyholders' privacy it could not comment on the specifics of a claim nor on details of a dispute.

There are several options open to policyholders who disagree with the company's decisions, including contacting the General Insurance OmbudService and the Financial Consumer Agency of Canada, it said.

Before 2015, the only financial compensation available for overland flood damage to homes in Canada was through disaster financial assistance programs provided by the federal and provincial governments, Wawanesa spokesman Brad Hartle said. The company is one of 30 firms across Canada that now offer some level of flood coverage.

"Some homes face a greater risk of overland flood than others and that is reflected in the coverage available, and the price charged," he said.

Rob de Pruis, national director of consumer and industry relations at the Insurance Bureau of Canada, said insurance costs related to extreme weather have ballooned in the past decade. The national average stands at $2.1 billion annually, up from $422 million between 1983 and 2008.

"The insurance industry has seen an increase in frequency and severity of severe weather events, and we've been sounding the alarm for years," he said.

November's floods were the costliest disaster in B.C. history, with insured costs estimated at $515 million as of January. That figure is likely to rise and does not include uninsured costs, the bureau says.

The best estimate based on anecdotal evidence is that about 30 per cent of properties in high-impact areas had some level of overland flood coverage, de Pruis said, but there is no official count.

About 800,000 properties in high-risk zones across Canada remain ineligible for coverage, he said.

The Insurance Bureau of Canada is working with the federal government to develop a flood map and flood plan to increase the eligibility for coverage for those currently uninsured, he said.

For now, it's up to individual companies to determine how much coverage they will offer in risky areas like floodplains and along rivers.

Pricing is difficult, because some risks are so high that the appropriate price of coverage would be unaffordable, de Pruis said.

"As the risk starts increasing, the cost goes up and the coverage limits may get reduced," he said.

In a news release this week, the B.C. government urged British Columbians to prepare for disasters by buying home insurance.

However, it notes that flood insurance can be hard to come by.

Months after the flood, Velt said she and her husband are still making mortgage payments on the house that is gone and they also pay for insurance to protect themselves from liability if someone injures themselves on the property.

The last time Velt was in the house, she was trying to break open the door to rescue her pets. She's been wearing donated gumboots and hoodies, but with the seasons changing, Velt said she realizes she needs a whole new summer wardrobe.

"When you walk away with what's on your back, you have nothing. It's coming into summer now, I tried to explain to Red Cross, we have no shorts," she said.

The B.C. government has said flood victims are eligible for up to $300,000 in disaster financial assistance and Velt said she is hoping that will come through soon.

For now, she said she's grateful for the support of friends and family.

This report by The Canadian Press was first published April 15, 2022.