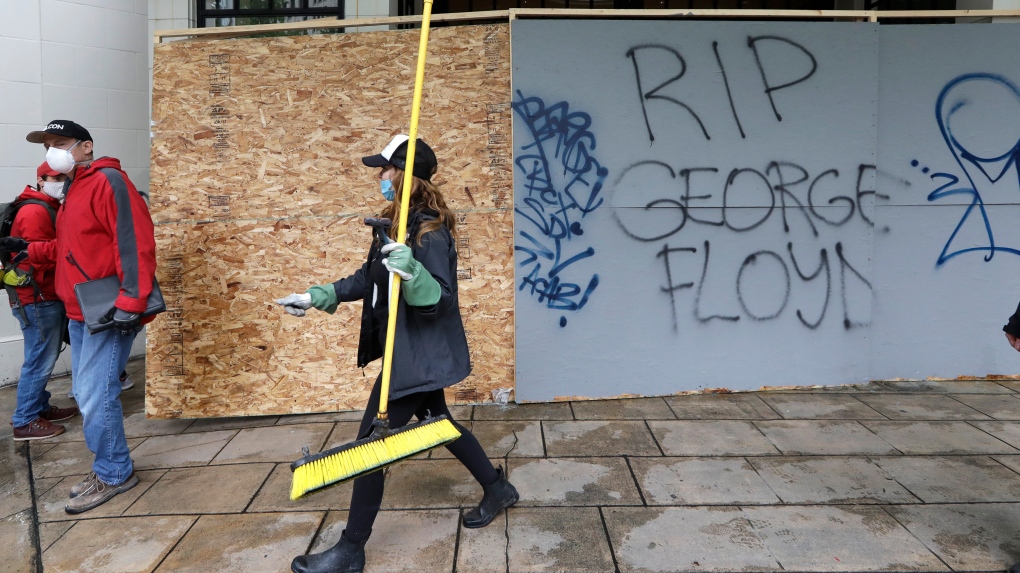 A woman helping to clean up downtown walks past graffiti Sunday, May 31, 2020, in Seattle, following a night of unrest and protests over the death of George Floyd, a black man who was in police custody in Minneapolis. Floyd died after being restrained by Minneapolis police officers on May 25. (AP Photo/Elaine Thompson)

SEATTLE -- Washington Gov. Jay Inslee is dispatching an additional 200 National Guard troops to Seattle to help maintain order after protests over the killing of George Floyd turned violent, with looters smashing up storefronts and stealing clothes and other items from downtown shops.

The mayors of Seattle and Portland, Oregon, imposed Sunday evening curfews. Portland, too, saw widespread mayhem. Inslee's order means that up to to 400 National Guard personnel will be available to assist the Northwest's largest city clean up and deal with potential further unrest.

Police in Seattle arrested at least 27 people Saturday on charges like assault and looting while Portland police arrested 48 people after downtown storefronts were vandalized and fires were set.

On Sunday morning, hundreds of people of all ages turned out in downtown Seattle to help clean up the destruction, sweeping up broken glass and cleaning off graffiti. Mayor Jenny Durkan and Police Chief Carmen Best walked through the area and spoke with business owners.

Seattle had a 5 p.m. curfew Saturday and Portland's was 8 p.m. Those curfews for the entire cities will remain in place for Sunday, officials said. Other Northwest cities with Sunday curfews included Eugene and Salem in Oregon.

Durkan announced her curfew for Saturday and Sunday after rioters torched police vehicles and spilled onto Interstate 5, forcing the freeway's temporary closure through the central part of the Northwest's largest city.

Thousands of people gathered in downtown Seattle in the rain to protest the killing of Floyd, a black man who died Monday after a white Minneapolis police officer pressed his knee on Floyd's neck until he stopped breathing. His death has prompted protests across the U.S. and Europe.

A largely peaceful demonstration happened in Seattle on Saturday afternoon, while police later deployed flash bangs to disperse people they said had begun throw rocks and bottles at officers. Police also pepper-sprayed demonstrators who got close to police lines, and officers with bicycles pushed people to move back.

The Washington State Patrol temporarily closed both directions of Interstate 5 through the city between Interstate 90 and Highway 520. Protesters marched through the lanes of the freeway.

News footage showed at least one destroyed police cruiser, other vehicle fires and people breaking into retail stores and other businesses. Video shot by a journalist from the Seattle news website Crosscut showed police arriving as storefronts were being smashed and broken into. As one officer restrained a person being arrested, the video showed the officer putting his knee on the man's neck and the crowd yells for him to remove it. The video then shows a second officer pulling the knee off the neck and onto the detained man's back.

Seattle Police said two rifles that were stolen from patrol cars that were set on fire have been recovered by a private security guard for a local television reporter.

Although many dispersed soon after, dozens remained downtown in defiance of the curfew, setting fires, breaking into retail stores and taking items while police fired tear gas and arrested at least one person.

Best said officers and others were injured, though she didn't provide details.

“We will continue to respond swiftly to all acts of violence and destruction,” Best said in a statement.

The governor said he had activated up to 200 members of the Washington National Guard in response to a request from the city to help protect property, as well as manage crowds and traffic. Guard personnel will be unarmed and work under the direction of city leadership, the statement from the governor's office said.

“The National Guard is on stand by to assist the Seattle Police Department as requested by Mayor Durkan,” Inslee said. “They will only be utilized if absolutely necessary and we appreciate their efforts to help in this important work.”

As for the curfew, residents should remain in their homes “to the extent possible” and not travel in or through Seattle when it is in place, said Durkan, Best and Seattle Fire Department Chief Harold Scoggins in a statement.

Portland Mayor Ted Wheeler announced Sunday morning that his city's curfew would continue, and starts again at 8 p.m. Sunday. For a second night, people in Portland roamed city streets. Officers said some threw projectiles at them. According to a statement, fireworks and “aerial mortars” were thrown at the Multnomah County Courthouse late Saturday.

In a tweet Sunday morning, Wheeler, Portland's mayor, wrote: “Agitators are not led by a conviction to change systemic racism. They are opportunists, using the cover of legitimate protests to sow fear in our communities. Don't let them.”