Recreational marijuana sales in British Columbia are in full swing, with hundreds lining up outside the first government-run store in Kamloops Wednesday and even more purchasing cannabis products online.

But legalization has left the operators of existing dispensaries in Vancouver with a difficult decision to make: keep operating illegally and risk being denied a licence later on, or close down and apply to reopen as a government-approved private retailer.

Craig Lust of Eggs Canna Inc. is counting on the latter approach to expand his business into the emerging legal marijuana market.

"We are shutting down because we want to be legal and compliant. We will be open again once we get licensing and our business model will be franchising across Canada" he told CTV News Wednesday, adding that "it's the responsibility of everyone in the industry to bring this product to the public in the most responsible way possible."

Lust said he expects the timeline for Eggs Canna's application to be about eight weeks, and commended those involved in the licensing process.

"All levels of government, from provincial to municipal, have been fantastic," he said. "They are new to it too. They have questions, we have questions, but honestly every person we've dealt with has been great to deal with."

Others selling pot in the city, however, say legalization changes little when it comes to the way they intend to do business.

"I'm not really interested in applying for one of those licences," said Dana Larsen, who runs The Medical Cannabis Dispensary in East Vancouver.

"I've been selling cannabis for over 10 years at our dispensary, but I didn't start that so that one day I could have a legal permit. I did it so that we could legalize cannabis in Canada and that we could get access to those that need it."

Larsen cited the lack of certain kinds of products under provincial rules for his decision to stay open.

"It's not so much about defiance. It's about continuing to serve our members and patients that rely on us. We have to remember that this legalization is only covering dried buds," he said. "Extracts, edibles, capsules, suppositories—these really necessary medicinal products are not going to be available for at least a year, maybe longer."

It's partly for those reasons that Weeds Glass and Gifts, a dispensary with several locations in the city, is taking a mixed approach.

According to owner Don Briere, Weeds has closed 10 locations as it waits for the outcome of its licence application and a court challenge against the city. Four locations remain open.

"We want to legitimize it. I've been in the industry 28 years standing for everybody's rights to be able to do this," Briere said. "We are an asset to the community and we help by employing people and paying taxes and taking money away from organized crime."

It's unclear how long Briere, Lust and others might have to wait, but Solicitor General Mike Farnworth said Wednesday a number of applications were in their final stages at the provincial level.

Once that process is complete, the province then passes on those applications to the City of Vancouver, which then decides whether to issue development permits for the would-be dispensaries, according to the city's chief licence inspector.

As of Wednesday, the city had received eight such applications, Kathryn Holm told CTV News, six of which already have development permits.

"We certainly know that we have more than eight operating right now," she said. "We also understand that the application process is quite engaging and quite long, so we have heard that it is taking some time to complete that step of the process."

But it seems unlikely that those operating illegally will be forced to close their doors anytime soon.

The CEO of the BC Liquor Distribution Branch, which is in charge of government-run pot stores, told CTV there won't be any government-run stores in the Lower Mainland until at least Christmas—a marked difference from other provinces such as Alberta, New Brunswick and Newfoundland, which already have 19, 20 and 24 stores respectively. 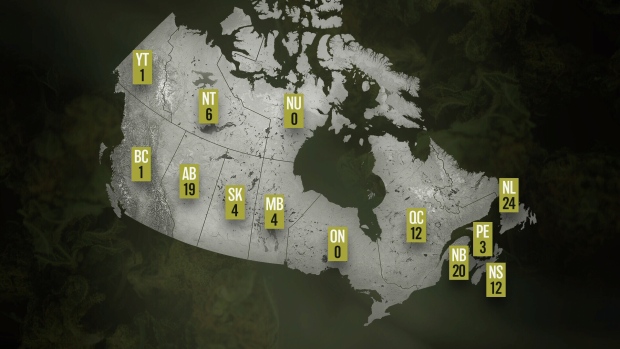 While legalization was cause for celebration for many in the province, including a large crowd that gathered in front of the Legislature in Victoria Wednesday, not everyone was in support of the historic move.

A small but vocal group of anti-cannabis demonstrators gathered in Vancouver's Robson Square to protest federal legislation the say was rushed and warn of the dangers of edible products such as gummies to children.

The activists say they believe people aren't informed enough about the risks of marijuana use and legalization won't lead to anything positive in Canada.

With files from CTV Vancouver's Penny Daflos and The Canadian Press