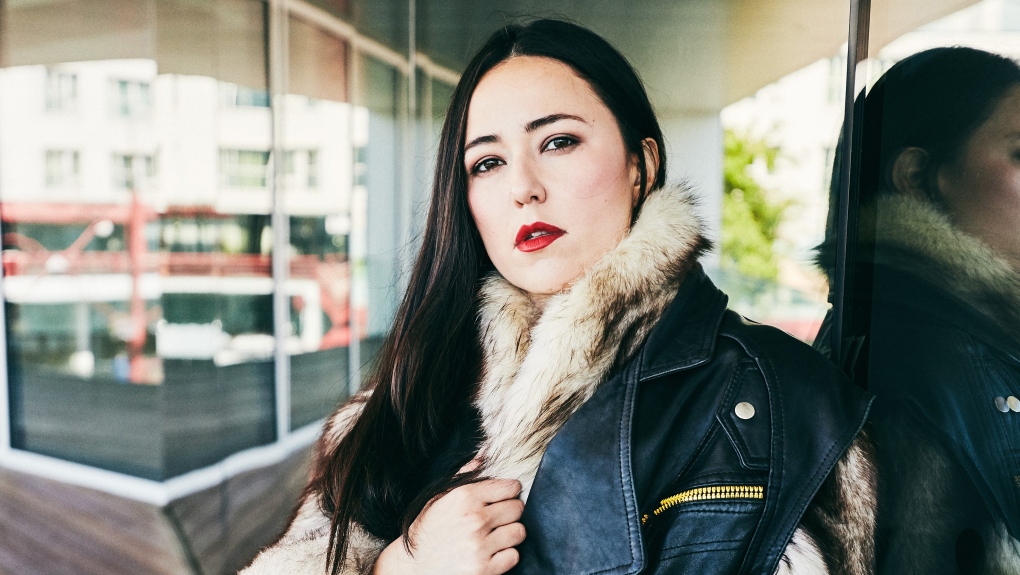 A model wears an outfit by designer Sho Sho Esquiro in a handout photo. (THE CANADIAN PRESS / HO-Evaan Kheraj)

VANCOUVER - The shape of a silhouette, the stitch on a hem, the colour of a garment - these elements of clothing design are more than esthetic choices for Indigenous artist Yolonda Skelton of the Gitxsan Nation.

Together they can provide a glimpse into the life of a person, a clan, and a nation, she says, and this week these stories take centre stage at the Vancouver Indigenous Fashion Week.

A key showcase will be Monday's opening night gala dedicated to missing and murdered Indigenous women and girls and members of the two-spirit LGBTQ community.

For Skelton, clothing design has “a higher purpose” than simple adornment, especially when it comes to gestures tied to the REDress Project started by Winnipeg multidisciplinary artist Jaime Black to remind Canadians about violent crimes against Indigenous women.

“When the ladies are walking the runway in the red dresses they're giving voice to their stolen sisters saying, 'We are silent no more,”' explains Skelton, a member of the House of Hax-be-gwoo-txw of the Fireweed Clan, whose label is called Sugiit Lukxs, after her traditional name.

“What connects us through this colour red is: red is the colour of our life's blood, it connects all human beings, cross-culturally.”

Skelton's traditional territory is in the Hazelton, B.C., area, along the Highway of Tears where many people have gone missing. But she says this is a national problem that demands more attention.

The audience is also encouraged to wear red to Monday's event, and the showcase's co-host Lorelai Williams says she'll be donning a red cape by Asoyuf for a simple reason: “We live in a country that just doesn't care about this issue.”

The B.C. activist has become a forceful voice on the issue, in large part because of her willingness to discuss her own loss - her aunt Belinda Williams was last seen in 1978, and her cousin Tanya Holyk was last seen in 1996. Holyk's DNA was found six years later on a farm owned by serial killer Robert Pickton.

“It hits close to home,” says Williams, whose dance group Butterflies in Spirit performed at a red dress event for the inaugural Vancouver Indigenous Fashion Week in 2017, also held on the unceded territories of Musqueam, Squamish, and Tsleil-Waututh Nations.

“There's this thing that happens to me when I see the support - it makes me cry, it makes me want to cry. There are events where I show up and see, 'Oh my God, all these people are here because of the issue.' It's always amazing to see that and see all the support.”

Williams says the recently wrapped national inquiry has done little to ease frustrations for family members unsatisfied with the way investigations into their missing loved ones unfolded. She says families who have complaints against the police and RCMP are now being called by those agencies to follow up, and that concerns her.

“As family members we don't feel comfortable with the police investigating the police. I don't feel like families across Canada actually know that they should be talking to these police or the RCMP with lawyers,” says Williams, whose community work includes serving as women's co-ordinator for the Vancouver Aboriginal Community Policing Centre, which works to build stronger relationships between Vancouver police and Indigenous communities.

“When the police called me, I was very strong about saying I want to meet in person ... so I would have witnesses to what was going on in my cases.”

A big question remains, “What next?” she adds.

“Is this issue going to die down in people's eyes? People are not going to care anymore because there's not going to be anything really around it,” says Williams.

“But this is what I mean about art - it raises awareness of this.”

As in the inaugural year, festival founder and producer Joleen Mitton says all the models and most of the production crew will be Indigenous, many of them from the foster care system.

The former model launched the showcase in 2017 but says personal tragedy forced her to postpone the second instalment until now. Her older brother Chris Giroux was killed in Edmonton at the end of 2016 and then her mentor, the West Coast carver and activist Beau Dick died.

Mitton says she only came out of her funk in late 2018, but says she emerged as dedicated as ever to celebrating and boosting Indigenous artists.

“I definitely want Vancouver to be a fashion hub for Indigenous designers,” Mitton says of her goal.

There will also be an Indigenous Makers Market selling authentic Indigenous art and designs.