Patients and doctors alike are feeling the effects of a turbulent health-care system, where clinic closures have B.C.'s physicians weighing their options as their orphaned patients plead to be seen by a shrinking number of general practitioners.

Several doctors have told CTV News they’re considering whether to amalgamate with large practices or leave family medicine altogether with little progress in convincing the province to compensate them for their time, while another clinic in the city of Vancouver has notified its patients that it’ll be closing before the end of the month.

Dr. Brian Montgomery wrote to patients of Mainland Medical Clinic that his Yaletown clinic will shut down as he’s unable to find a replacement doctor and “there is a tragic shortage of GPs in our province,” which means his patients are now orphaned and joining an estimated one million British Columbians looking for a family doctor.

“Patients are crying on the phone, saying ‘I can't get in anywhere in the city,’ and we’ve got all 15 lines going,” said Aquarius Medical Clinic office manager, Natalie Krasniak, as multiple phone lines rang non-stop during our interview. “We get anywhere from very understanding patients to patients swearing at us and telling us this government sucks.”

In the brief time CTV News was at the clinic, a dozen people called or came in person looking for walk-in appointments, many having been turned away from Urgent and Primary Care Centres (UPCCs) or other walk-in clinics. Aquarius was also fully-booked.

ALL DOCTORS WELCOME TO PRACTICE

The clinic’s medical director said some family doctors who closed their own practices due to the cost pressures are working at Aquarius while they figure out whether to take up work at UPCCs, join private medical providers like Telus Health, or leave the province for better opportunities.

“If they want to work once a week, twice a week, for three weeks, we'll take anything, we're desperate,” said Dr. Linda Jando.

She explained that a large volume of patients doesn’t necessarily mean a practice will be profitable, since the province doesn’t compensate doctors for the time spent with a patient and they’re seeing a surge in more serious, complex cases. Doctors are paid on a fee-for-service basis, meaning per visit, whether lasts five minutes or 45.

“A lot of the patients we're seeing now are a lot sicker than they've ever been because their healthcare has been left unmanaged and their medical conditions are out of control when they arrive,” said Jando, who said she knows of two doctors who recently realized on an hourly basis, they made less money than their receptionists. “They’ve now quit family medicine.”

While the premier has gotten involved in discussions with family doctors after some missteps by the health minister, there’s no indication the province is prepared to overhaul the budget to plug more money into health care. They’ve been pointing the finger at the federal government even though they haven’t updated the payment structure in decades, nor substantively increased the rate for patients seen.

A family doctor who came out of retirement during the pandemic believes the money already earmarked for primary care could be better used, suggesting an over-reliance on telehealth and virtual appointments is burning up healthcare dollars and physician hours unnecessarily.

“We have patients now who will have a telephone conversation with four or five doctors before actually being seen (in person) and properly diagnosed,” said Dr. Lana Lipkowitz, who only conducts virtual appointments follow-up care. “It's now taking six, seven, or eight visits before a patient gets that care -- and it's a real waste.”

On Monday, Doctors of BC updated their members on negotiations with the province, describing twice-weekly meetings to discuss a range of grievances by the province’s physicians. Their president acknowledged that compensation is at the top of their list, particularly at a time inflation is causing the costs of running their practices to skyrocket even further.

“We have proposed to government an option for doctors to move into an entirely new payment model that will combine the best of (fee-for-service) and contract models, one that will provide many of the things you are seeking,” wrote Dr. Ramneek Dosanjh in a memo obtained by CTV News.

“Our goal is that this new model will be attractive to a broad range of doctors, including those who bill FFS,” she went on to say. “It is our hope that we will be able to announce the details of this new model in the fall.” 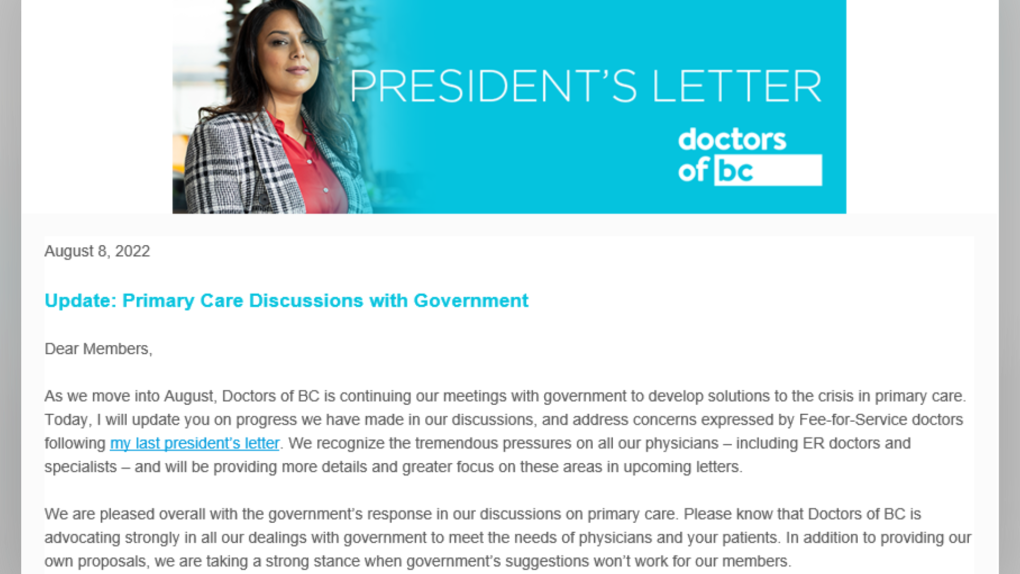 Federal authorities are set to close Canada's borders Wednesday to commercial dogs, including ones being put up for sale or adoption, from more than 100 countries deemed to be at high risk for canine rabies.

Russia prepares to annex occupied areas of Ukraine despite outcry

Russia is poised to formally annex areas of Ukraine where it has military control after referendums there reportedly endorsed Moscow's rule.