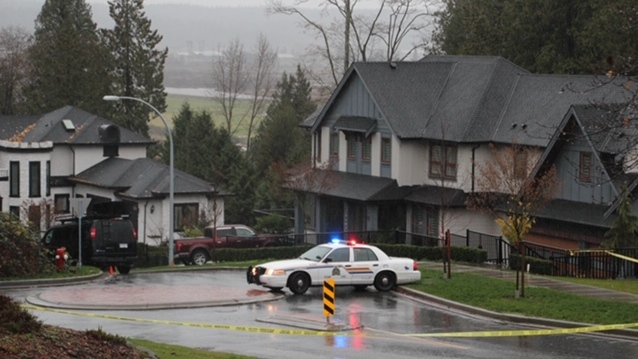 A Surrey neighbourhood is seen cordoned off with police tape on Nov. 26, 2018 following a fatal shooting.

There were 15 homicides across Surrey in 2018, a 25 per cent increase over the 12 recorded the previous year.

That includes the murder of Paul Bennett, an innocent nurse and hockey coach who was gunned down in his own driveway in what police confirm was a case of mistaken identity.

But the RCMP noted the statistics also reveal decreases in every other category of violent crime, including reported sexual offences, which dropped 18 per cent down to 319 for the year.

Attempted murders and robberies declined 22 per cent and 33 per cent, respectively. The numbers show overall crime in the city dipped by four per cent.

“The Surrey RCMP continues to pursue crime reduction and address public safety issues through a balanced approach that includes prevention, outreach, intervention and enforcement efforts,” Asst. Commissioner Dwayne McDonald said in a news release. “The 2018 crime statistics report demonstrates that the collective efforts of the police, partners and the community are contributing to positive trends in terms of the incidence of crime.”

Property crime decreased 11 per cent in 2018, with drops in 11 of 13 categories. Only theft over $5,000 and shoplifting increased, by 33 per cent and eight per cent, respectively.

The statistics, which have been published quarterly on the B.C. RCMP's website for years, come as Surrey city officials continues moving toward scrapping the local detachment in favour of a new, municipal police force.

Since Mayor Doug McCallum was elected last fall, the city has also paused the planned hiring of 12 new RCMP officers, a move that led to outcry from critics and victims' families.