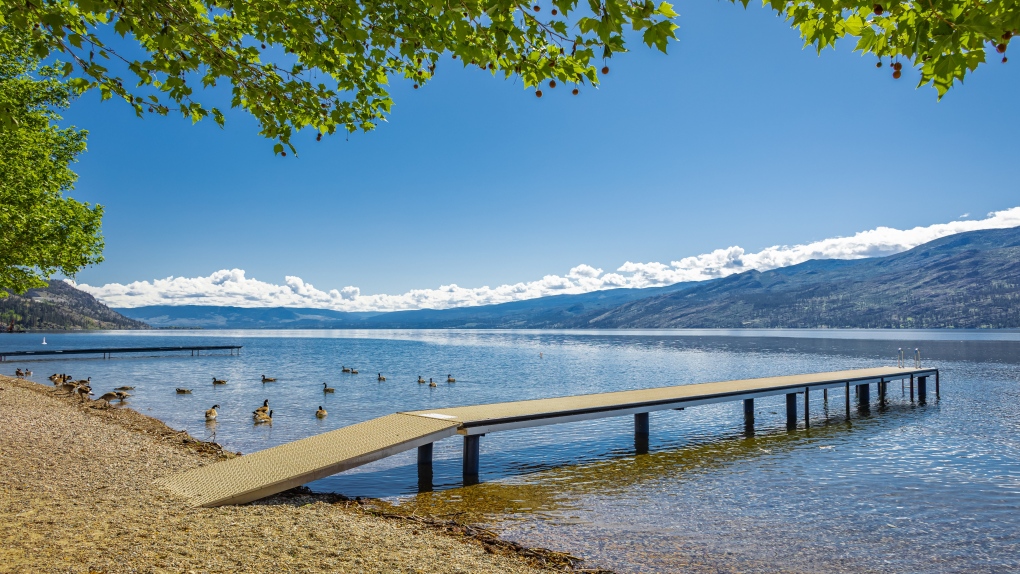 A dock on Okanagan Lake is seen in this undated photo. (Shutterstock)

A summer camp lifeguard is being recognized for his efforts in a dramatic rescue after a boater was flung from a vessel when it hit a dock at high speed.

Kelowna RCMP said the incident unfolded on July 29 near Green Bay Bible Camp. One female was ejected from the boat after it hit the dock.

Police said a lifeguard from the camp, who was off-duty at the time, quickly jumped into the water and swam towards the female "through debris and leaking fuel." When Aiden Godwin reached her, he found her floating unconscious.

Mounties said it took "sheer determination" and his training to bring the female to shore while still supporting her head and neck.

At the shore, other Good Samaritans stepped in to help, putting the female on a spine board. Once police and paramedics arrived, she was taken to hospital.

The RCMP said the boat and the female weren't associated with the summer camp.

About two weeks after the incident, a ceremony was held to recognize Godwin's efforts, as well as the efforts of the other lifeguards who helped that day.

"Our community is fortunate to have people like Aiden who rise above the crowds with their courage and valour. On behalf of the Kelowna Regional Royal Canadian Mounted Police and your community, we thank you Aiden," said Supt. Kara Triance in a news release.

The Conservatives are calling on the federal government to allow the importation and sale of foreign language-labelled versions of the same formulations of over-the-counter paediatric pain medication, in response to an ongoing nationwide shortage.

Tom Mulcair: What Legault's win might mean for the future of Canada

François Legault may have changed his separatist strategy but he hasn’t changed his stripes, former NDP leader Tom Mulcair says in an exclusive column on CTVNews.ca.

State of emergency declared in northern N.S., thousands still without power on P.E.I.

More than 16,000 customers in Nova Scotia and Prince Edward Island are still without electricity 12 days after post-tropical storm Fiona hit the Maritimes on Sept. 23. The ongoing outages and restoration efforts have prompted the Nova Scotia government to declare a state of emergency in several counties in northern Nova Scotia.