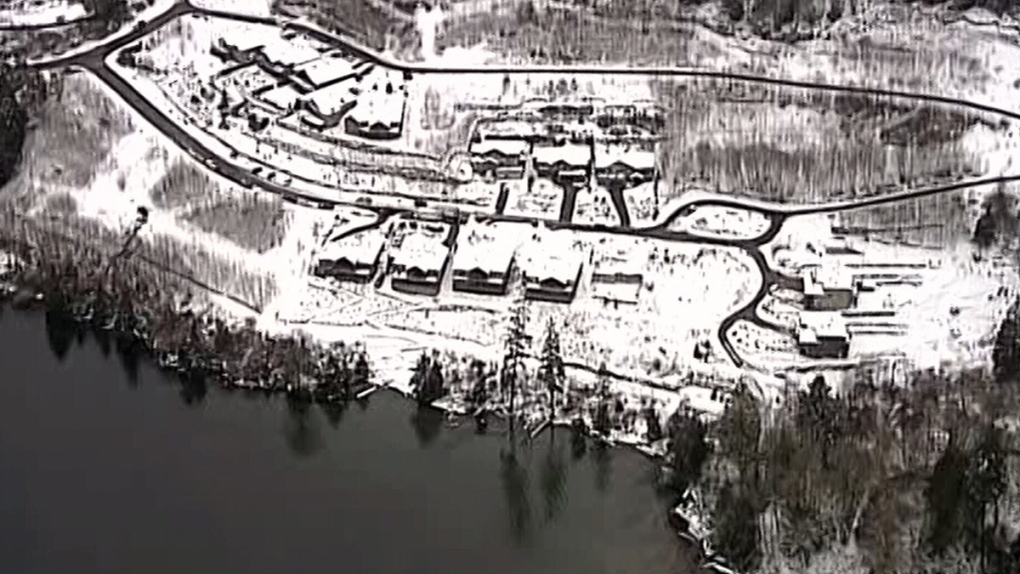 An area of Sechelt, B.C. seen from CTV's Chopper 9 is under evacuation alert due to sinkholes.

Homeowners on B.C.'s Sunshine Coast are suing the province and several other parties after a series of sinkholes forced them to leave their house.

Rodney and Donna Goy filed the lawsuit in B.C. Supreme Court earlier this month, claiming negligence on behalf of those involved in the development of the subdivision in Sechelt.

The 41-page notice of civil claim names the province and District of Sechelt as defendants, as well as the officer who approved the subdivision and the developer of the land. Also named are several individuals who worked with the developer or for real estate and brokerage firms.

The lawsuit stems from a state of emergency issued back in February. The Goys were among several residence of the Seawatch Concordia Subdivision who were told to leave 14 properties located on two streets in Sechelt due to what the district called "geotechnical instability."

The district issued the state of emergency and a subsequent evacuation order due to "potential danger to life and health," and set up barricades blocking access to the Seawatch area.

Rodney and Donna spoke to CTV News Vancouver at the time, and said they felt they never should have been allowed to move in.

"It's just shameful," said Donna, a resident of the subdivision for five years.

"It's a shame that we have to be thrown out this way and not even know where we're going."

In the notice of claim filed Aug. 13, the Goys allege that "numerous sinkholes and other incidents of landslip" were noted during construction in 2005. The district told Concordia it needed to provide a new geotechnical report from a professional that would confirm the land was not subject to further sinkholes.

The subdivision's final approval came in 2006, and the land was cleared, roads were put in, drainage works were installed and homes were built between that year and 2011.

A sinkhole developed in the area in 2007, and several others were reported in the years that followed, the lawsuit claims.

The statement of claim outlines several actions taken by the district, reports that were required and adjustments that were made as a result.

In mid-February, they were ordered to leave. The evacuation order is still in effect months later.

Claims from the homeowners

The Goys claim the District of Sechelt owed a duty of care to those who bought properties within the subdivision, and to exercise care in determining whether to approve the development and building permits. They say the district failed to take, or require the developer to take, adequate steps to determine and prevent potential hazards.

Among other claims, the suit says the district should have warned prospective buyers of the problems with the land.

There are pages of claims against the developer and those associated, including what the plaintiffs call a failure to disclose "the full nature and extent of geotechnical problems, and the degree of risk of occurrence of future geotechnical events."

The province is named as a defendant for, among a list of reasons, delaying the implementation of ground motion safety standards in B.C.

"Had (the provincial government) promptly implemented the more stringent seismic hazard probability level requirement for residential development of 2% in 50 years… the subdivision would not have been approved or, alternatively, the Building Permit and Occupancy Certificate for the Home would not have been issued, and Mr. and Mrs. Goy would not have purchased Lot 8," the notice says.

They also claim the realtors who represented them in their purchase failed to act in the Goys' best interests, and did not disclose what they knew about the history of the subdivision.

The couple is seeking general and special damages from each defendant, as well as punitive damages against the district, province, Concordia and associated staff. A specific dollar amount was not provided.

Those involved must respond within 21 days of the date on which a copy of the notice of civil claim was served.

Officials said it was not known exactly when the ground underneath the subdivision became unstable, but that it would cost an estimated $10 million to fix. The district said the taxpayer should not be held responsible for the cost associated with what it described as a "problem created by a private venue."

The mayor said in February that the developers behind the subdivision had acquired all the permits and reports required by the district, including documents signed off on by three types of engineers.

In a statement to CTV that month, the developer said it had "great concern and compassion for the homeowners and families that are now being required to leave their homes."

Concordia Seawatch Ltd. And others are currently involved in civil litigation in connection with the development, it said at the time.