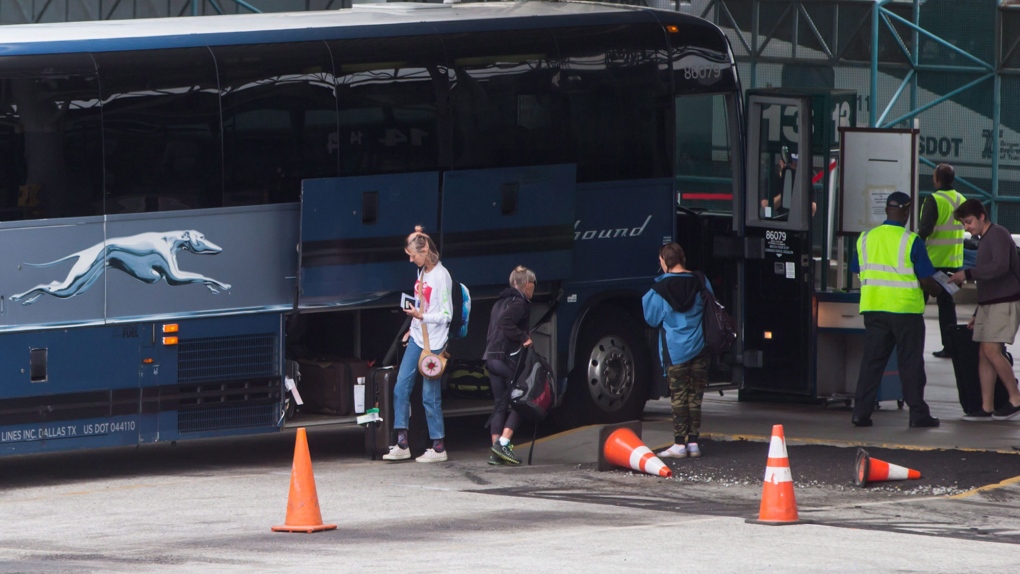 Passengers place their luggage on a Greyhoundbus before departing from Vancouver, on Monday July 9, 2018. THE CANADIAN PRESS/Darryl Dyck

WINNIPEG - The federal government has rejected Manitoba's request for Ottawa to pay Greyhound to keep operating in Western Canada for a few more months.

Greyhound announced in early July that it will end bus service between British Columbia and northern Ontario on Oct. 31, except for the Vancouver-Seattle route.

Manitoba wanted the senior government to ask Greyhound to extend service by at least 60 days to allow other businesses to fill cancelled routes, and have Ottawa foot the bill for the extension if the company demanded it.

Manitoba Infrastructure Minister Ron Schuler said his counterparts in B.C., Alberta, Saskatchewan and Ontario agreed with that idea, and Premier Brian Pallister raised it at the premiers meeting last summer.

But federal Transport Minister Marc Garneau told the Winnipeg Free Press newspaper on Wednesday that this option is off the table.

Provincial regulations gave Greyhound a monopoly on the busiest routes, which was contingent on the firm serving some of the least populated ones.

“We looked at this extensively, and I will say that we haven't left any stones unturned,” Garneau said. “There will be gaps and so we are addressing those and looking at them, and working with the provinces.”

The transport minister also said he'll go public once the two levels of government agree on a plan.

Provincial regulations gave Greyhound a monopoly on the busiest routes, which was contingent on the firm serving some of the least populated ones.

The Assembly of Manitoba Chiefs has expressed alarm about routes that the private sector won't take up, cutting off those who need affordable transportation for health services.

Officials with the National Inquiry into Missing and Murdered Indigenous Women and Girls has also asked Ottawa to intervene.

Conservative MP James Bezan said he hasn't received a lot of correspondence about the issue from his Interlake constituents, but said the Liberals have “probably the worst timing” in leaving Manitobans with no sense of what direction Ottawa will take five weeks before service ends.

“You cannot leave these things until last minute; you have to have the opportunity for people who are being impacted, as well as the businesses, a chance to transition,” he said.