Weeks after her daughter was viciously killed, Jana Jorgenson is hoping to raise awareness for women facing abuse.

On July 21, Jorgenson’s daughter, 43-year-old Amber Culley, was shot and killed by Eric Shestalo inside a Chilliwack home. Mimi Kates, 49, was also killed, and Culley’s brother Aaron was shot, but survived.

"It's just horrific to think we'll never see her again. I just can't believe that quite yet,” Jorgenson told CTV News.

On July 22, Shestalo’s red Jeep YJ was found in the Bridal Falls area, east of Chilliwack. On July 25, Shestalo’s body was found. Police say it appears he died from a self-inflicted gunshot wound.

Jorgenson says Shestalo was an ex-partner of her daughter.

"Nobody in our family liked him and we tried desperately to keep him away from her,” Jorgenson said.

Jorgenson said Culley had a restraining order against Shestalo, who was supposed to be in court the same day as the killings to face multiple charges of assault and uttering threats to cause bodily harm.

“This was a man who should have been put away 20 years ago,” she said.

Jorgenson said her daughter wasn’t the first woman to have issues with Shestalo.

“A lot of them have contacted us (with) the same kind of scary stories, that didn’t quite get to this,” she said.

Jorgenson said she’d now like to see more support and awareness of violence against women.

"This predatory type of behaviour that is insurmountable for these women, they live in that fear but they don't know how to reach out really and tell other people,” she said.

"As a community, we need to come together and create more for these women to have safety and to have counselling before something like this happens.”

Culley’s two sons – 12-year-old Dante and nine-year-old Magnus – were home at the time of the shootings and witnessed much of the incident.

"They've had so much trauma in their life,” Jorgenson said.

She says the boys' father also died three years ago of a medical emergency.

“They’re really focused on her (Amber) being present,” she said.

The family has created an online trust fund for the boys, hoping others will help them build towards the future.

"I just want them to be able to have an opportunity,” Jorgenson said.

Dante and Magnus are now living with Jorgenson and her husband in Parksville, B.C. 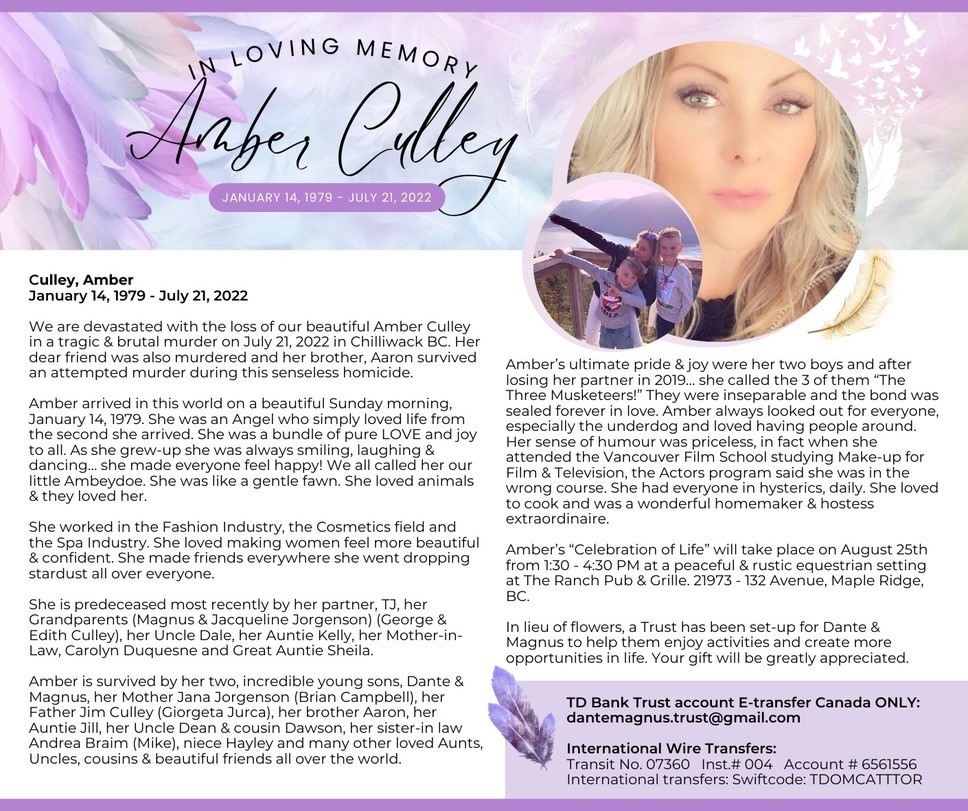 Details on the online trust for Culley's sons are seen at the bottom of this memorial image.

A celebration of the life of Amber Culley will be held in Maple Ridge on Aug. 25.

A search is underway in southwestern Newfoundland for a woman who was reportedly swept out to sea after a wave struck her home during post-tropical storm Fiona.

After the storm: residents of Atlantic Canada and eastern Quebec survey damage

A day after post-tropical storm Fiona left a trail of destruction through Atlantic Canada and eastern Quebec, residents of a coastal town in western Newfoundland continued to pick through wreckage strewn across their community, easily the most damaged area in the region.