'It's an epidemic': Animal group sees painful leg-hold traps on the rise

SURREY -- A young raccoon has been to "hell and back" after it was found yelping in a garbage can filled with water.

Earlier this month, a Surrey resident was trying to drown the animal in their backyard when a neighbour heard the creature's screams for help.

Ciara O'Higgins, an animal care supervisor at Critter Care Wildlife Society, said the resident first set a trap with bait to capture the raccoon before attempting to kill it.

"(They) intentionally transferred him into a garbage can filled with water in order to drown him," she said.

The SPCA notified the society and when a volunteer attended, the raccoon was found huddled in a ball on the grass.

"The racoon was not very responsive when the volunteer showed up. She was able to quite easily pick up him and put him in a carrier. Usually healthy raccoons would put up quite a fight, so it was really, really sad to see him succumbing to the torture he was put through," O'Higgins said.

This case is one of many Critter Care Wildlife Society has received calls about in recent weeks.

"We've had so many calls of trapped raccoons and it's on the rise. It's an epidemic of torture to wildlife," O'Higgins said.

According to the society, there have been 27 cases of animals injured by traps so far this year. That number is a major escalation compared to 15 incidents in 2018 and nine in 2017.

Critter Care believes there are likely more incidents, because some go unreported.

"Anybody with empathy and compassion should not be using these leg-hold traps," said Gail Martin, the founder of the society.

Martin said the traps crush the bones in the animal's paws, making them unable to go back into the wild. 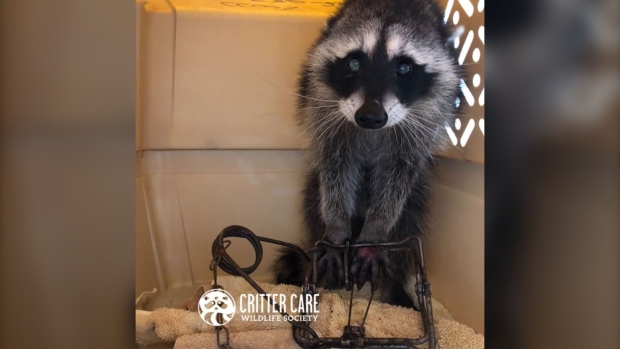 This raccoon found in a trap in a Langley neighbourhood in August 2019. Animal rescue groups say traps crush the bones in the animal's paws, making them unable to go back into the wild. (Submitted/Critter Care Wildlife Society)

"In most cases, they had to be put down, the injuries were too severe. But at least they weren't left out there to die in pain," she said.

Another animal advocacy group, The Fur-Bearer, is demanding the province makes changes.

"What the animals really need is for the province to step up," said spokesperson Michael Howie in a press release. "Every year we’ve asked the province for common-sense updates to policy, such as allowing local governments to enact, educate about, and enforce by-laws about traps to curb these incidents, or mandatory signage when traps are being used. And every year goes past with no change, but more individual animals and families suffering."

Critter Care Wildlife Society would also like to see stricter rules in place regarding traps, especially in urban areas.

"I would definitely like to see laws in place for no trapping in municipalities, (and higher) fines against people who are caught trapping," O'Higgins said.

The provincial Ministry of Forests, Lands, Natural Resource Operations and Rural Development said in an emailed statement that "these are very unfortunate incidents and devastating for pet owners."

Each year, B.C.'s conservation service gets about eight reports of pets caught in traps, but "many more incidents likely go unreported," the ministry said, adding that violations of provincial regulations on hunting and trapping could result in fines or penalties.

In the meantime, O'Higgins is reminding people why it's important not to see raccoons as nuisances.

"We're the reason why they're coming to our yards and trying to go through our trash, so we need to protect them."