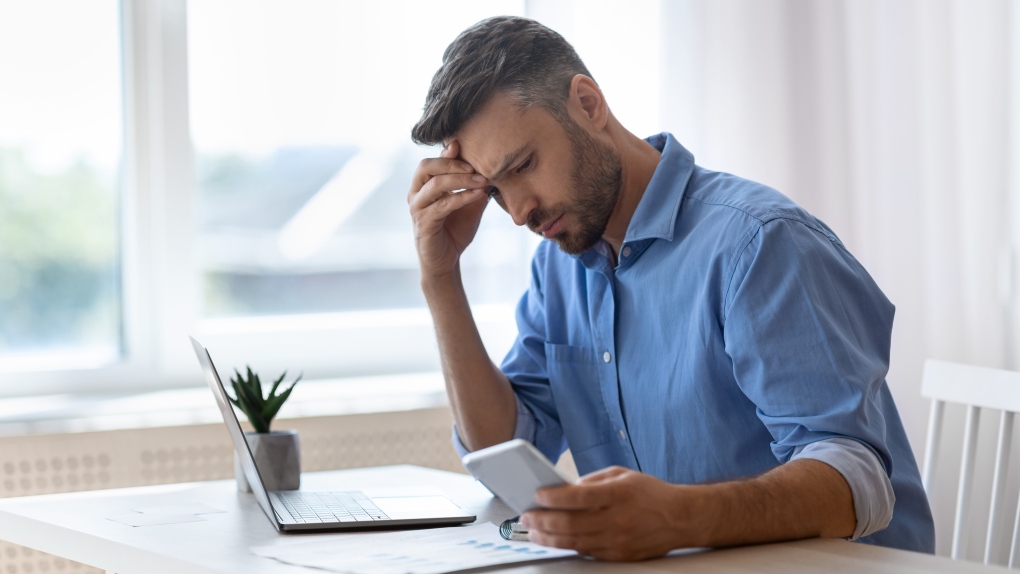 British Columbians are among those who lose the most money on average to scams.

A just-published study suggests that victims in B.C. lose an average of about $3,000 – a similar sum to what's seen in Ontario and Alberta.

According to the study from Social Catfish, which used data from the Canadian Anti-Fraud Centre collected over the last five years, B.C. victims lose the third-most amount of money on average.

The province or territory where victims have lost the least amount of money is Prince Edward Island, where the average is $554.14.

The study did not suggest that means residents of those provinces are more or less tech-savvy, and when it comes to reported complaints, B.C. was sixth.

According to Social Catfish, the rate of CAFC complaints in B.C. is 249 per 100,000 residents. Manitoba actually had the highest rate of reported scam victims, followed by Ontario and Yukon. 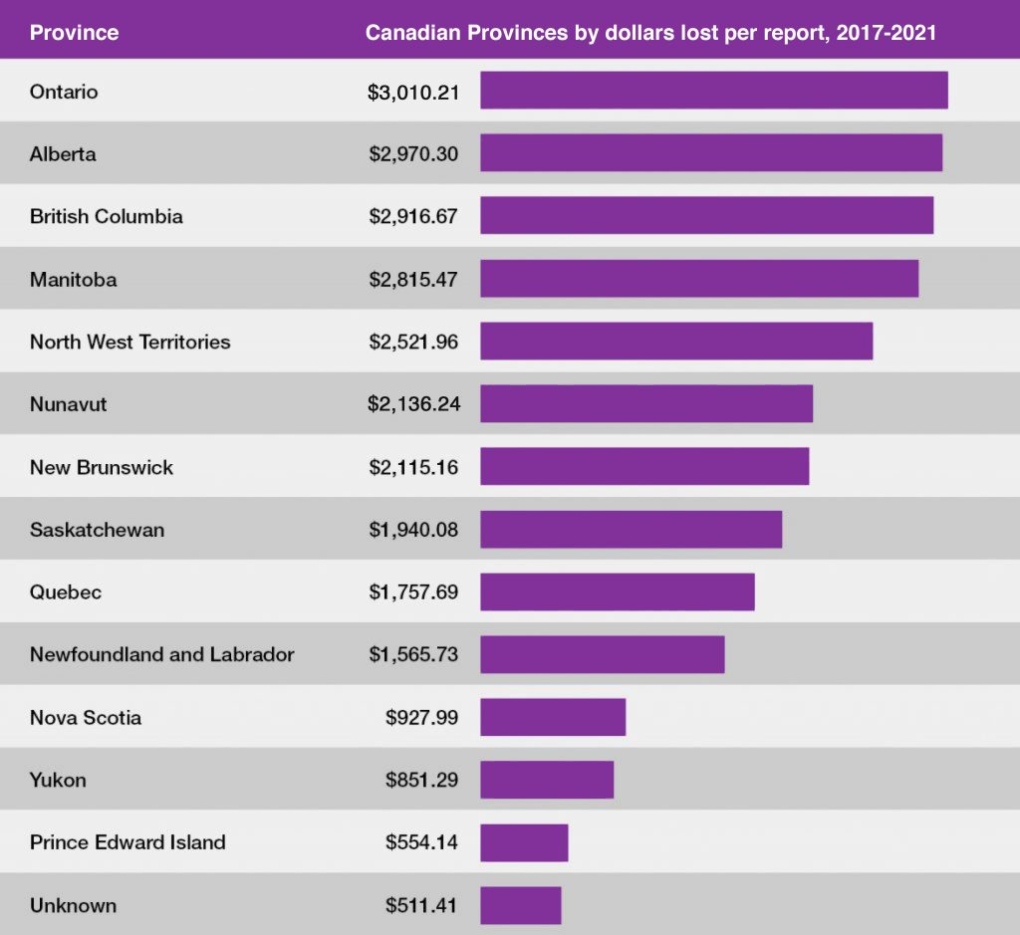 As for how fraudsters are tricking their victims, the most common scam in Canada involves investment. Canadians lost a whopping $165 million between 2017 and 2021 to opportunities billed as once-in-a-lifetime, can't-miss deals.

These scams are often sent by email or social media, and promise a high rate of return for little risk. The would-be investor transfers money, then never sees it again.

Often these scams involve cryptocurrency such as Bitcoin.

As for how to avoid falling for it, experts advise those approached to research the person or company, and consult a third-party financial advisor.

The second most-costly scams prey on a different emotion: love.

Canadians lost $134 million to romance scams in the five-year period involved in the study. Scammers involved in these will use social media or dating apps to approach their victims and earn their trust, then start faking emergencies.

They ask for money, get as much as they can from the target, then disappear.

To protect yourself, experts advise, refuse to give money to anyone not willing to meet in person or use video chat.

Another tip is to save the photo or photos the person is using and run them through a reverse image search, to see if the photos are their own. To do this, go to Google Images in a web browser and upload the image or images by clicking the camera icon in the search bar, then look through the results.

And another $54 million was lost during the same period to extortion scams. These include emails and phone calls from "police" or similar agencies accusing the target of serious criminal offences.

Scammers will tell the victim to respond to a fake email address if they want to avoid jail time, then ask for money and other personal information.

Police and other law enforcement agencies will never demand cash or threaten to make an arrest by phone or email, so potential victims can be confident that these approaches are fake. 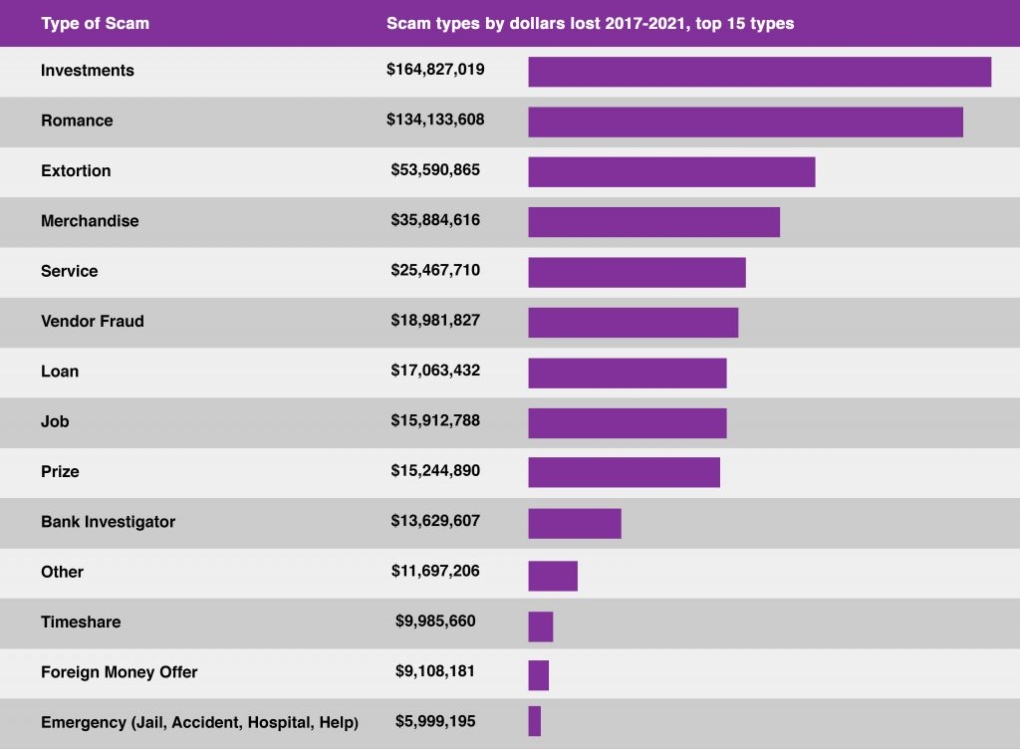 WHO ARE THE VICTIMS?

According to the study, the most vulnerable age group is 60 to 69.

In a breakdown of dollars lost by age group to romance scams specifically, this was still true, but people between the ages of 40 and 59, as well as 70 to 79, also lost significant amounts of money, and people in their 30s and 80s were not that far behind.

The average loss by all Canadians to these scams was about $54,000, but some were more likely than others.

According to the CAFC, there had been 29,294 reports of all types of fraud involving 18,609 victims this year, as of the end of April. Those victims lost approximately $163.9 million. 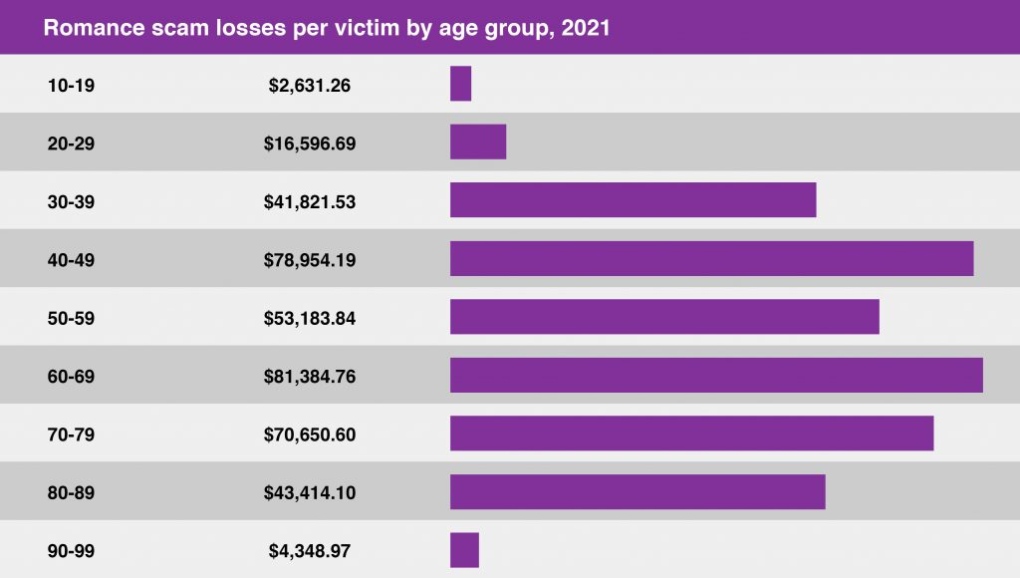