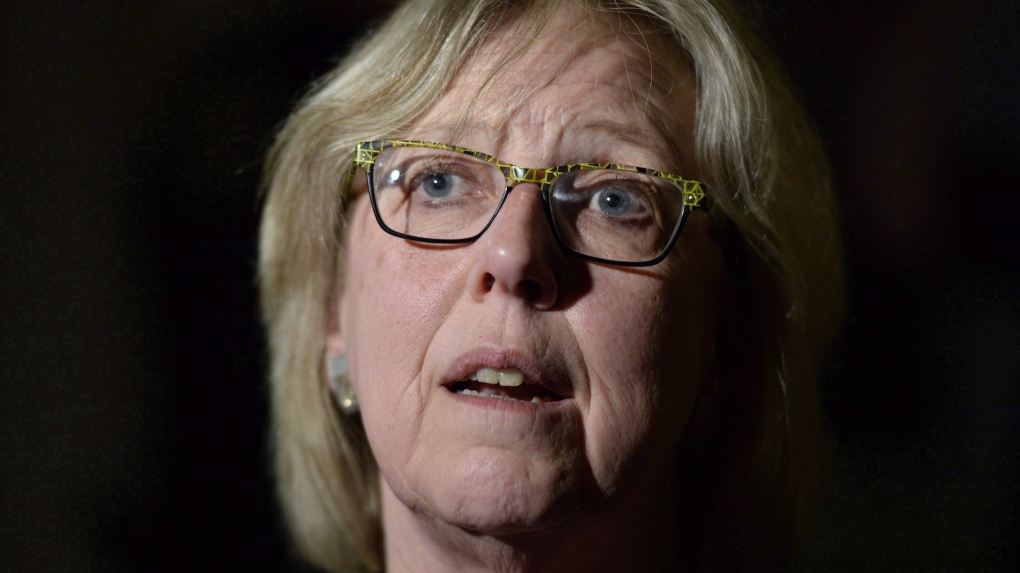 Green Party leader Elizabeth May speaks with reporters before question period in the House of Commons in Ottawa on Wednesday, May 10, 2017. (THE CANADIAN PRESS/Adrian Wyld)

OTTAWA - Green party Leader Elizabeth May says saving the world from climate change requires Canada to get off oil before the middle of the century.

In the meantime, she wants Canada off foreign oil as soon as possible.

The promise to make Canada energy independent is - perhaps unexpectedly - in line with the economic and climate strategy of Conservative leader Andrew Scheer.

Scheer's plan calls for Canada to import no foreign oil by 2030, partly by planning an energy corridor across Canada that could simplify the construction of pipelines able to move Alberta oil to any coast. He sees it as a way to find additional domestic markets for Canada's oilsands, in a bid to increase their production.

May's plan, to "turn off the taps to oil imports" is only a stop-gap measure to keep foreign oil out until Canada can break its oil habit altogether.

By 2050, May wants bitumen to be used in Canada only by the petrochemical industry for plastics, rubber, paint, and other such products.

May's climate plan is likely to get more scrutiny than its predecessors in past elections.

The Liberals and NDP already proved they are paying close attention to the rising threat of Green support, with both pushing similar motions to declare climate change an emergency in the House of Commons earlier this month. Both motions were tabled less than a week after the Greens elected a second MP in a Vancouver Island byelection, and not long after a provincial wing of the party formed the official opposition in Prince Edward Island.

May said she's perfectly fine with Green popularity pushing other parties to raise their games on climate. While both the Liberals and NDP claimed their motions had been in the works before the byelection result, May said there is no doubt in her mind that Paul Manly's winning and the NDP and Liberals finishing distantly third and fourth, "had almost everything to do with" the motions.

The NDP motion failed because it called for Canada to drop plans to expand the Trans Mountain pipeline, a pipeline May also opposes. The Liberal motion hasn't yet gone to a vote.

Canada's oil producers already pump enough product to meet domestic demand but there are two problems: there is no pipeline from the oil-rich west to refineries in the east, and even if there were, those refineries aren't equipped to handle the heavier bitumen that is the Alberta oilsands' trademark.

For Canadian refineries in the east, bitumen from the oilsands must be upgraded to synthetic crude. May's plan is to invest in upgraders to do it.

She acknowledges weaning Canada off foreign oil won't happen overnight, given existing contracts Canadian refineries have and figuring out how to build the upgraders and then ship the product.

Privately, Liberal government critics suggest there is no way to have Canada's east coast use Canadian oil without building a new pipeline to get the products there. May does not support a new pipeline anywhere, and argues the raw bitumen could be transferred by rail as long as Canada invests more in its rail services.

The proposed Energy East pipeline to carry diluted bitumen to the east coast fell apart in 2017 amid significant opposition in Quebec, opposition that continues under the new Coalition Avenir Quebec government.

Scheer's plan is to establish an energy corridor that would allow an Energy East-like pipeline to proceed alongside interprovincial electricity grids, with only one right-of-way required.

May said the Greens are the "only party that have a plan that allows human civilization to survive."

"It's not a Canadian lifestyle choice," she said. "All of humanity is at risk."